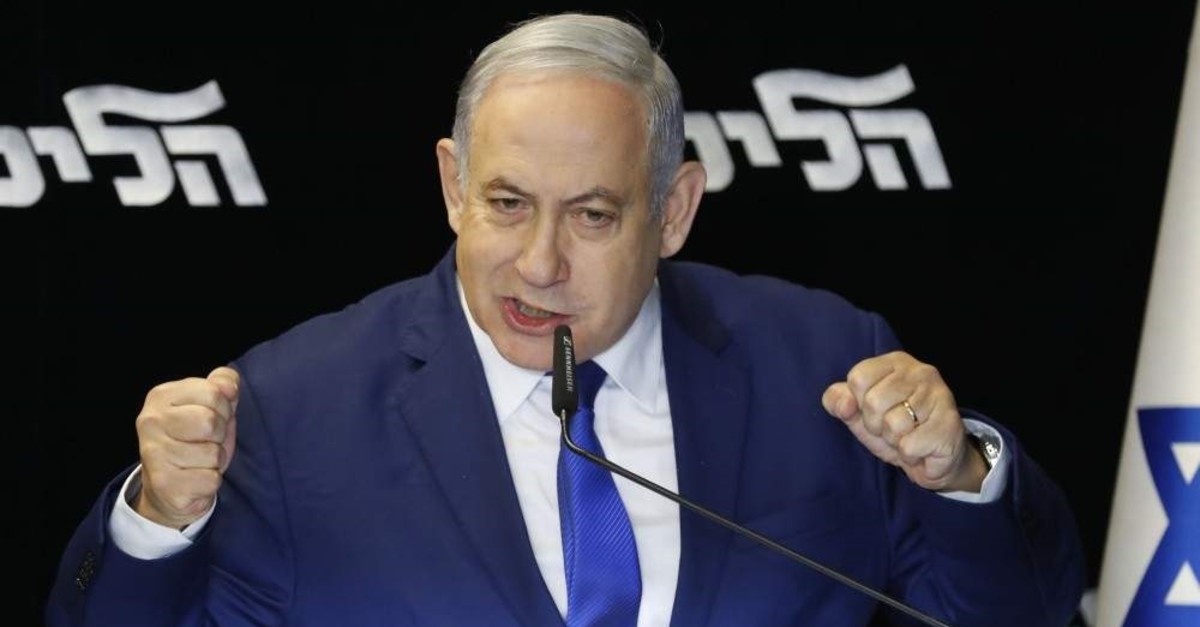 Israel's embattled prime minister and leader of the Likud Party, Benjamin Netanyahu, gives a statement after winning a leadership primary that ensures he will lead his right-wing party into a March general election, at the Airport City near Tel Aviv, Dec. 27, 2019.
by Yusuf Selman İnanç Dec 27, 2019 9:19 pm

Israeli Prime Minister Benjamin Netanyahu, who secured his leadership position in the Likud Party amid corruption charges, seems confident to win the upcoming elections and continue his harsh anti-Palestinian policies

Israeli Prime Minister Benjamin Netanyahu overcame the leadership challenge in Likud Party once again and this time despite the ongoing corruption allegations against him.

While he is being accused of fraud, bribery and other illegal activities, Netanyahu considers his success an important step toward securing the prime minister's office in the upcoming elections. Meanwhile, the Gaza protests and Netanyahu's threat to annex more territories will only escalate the tension further.

In September's national elections Netanyahu – Israel's longest-serving prime minister – failed to secure majority seats in the Knesset, the Israeli parliament. After his party and rivals failed to reach an understanding on a coalition, Israel has faced one of the worst political deadlocks in its history.

Contrary to expectations that the political deadlock would weaken Netanyahu's hold on power, his latest victory to secure Likud Party leadership seemed to have consolidated his position. Defeating one of his former aides and ministers, Gideon Saar, Netanyahu declared that he and his government will cling to power. While Netanyahu received 41,792 votes, his rival could manage only 15,885. However, it should be noted that the turnout was low and barely half of the registered voters attended the intraparty elections.

Following his victory, Netanyahu vowed to annex the Jordan Valley, convince the U.S. to recognize its sovereignty over occupied territories, destroy Iran and make a pact with a group of Arab countries.

Despite thanking the U.S. and President Donald Trump, Netanyahu hinted that he would be forceful against the U.S. "First, we will finalize our borders; second, we will push the U.S. to recognize our sovereignty in the Jordan Valley and the northern Dead Sea; third, we will push for U.S. recognition of our extension of sovereignty over all the communities in Judea and Samaria, all of them without exception; fourth, we will push for a historic defense alliance with the U.S. that will preserve Israeli freedom of action; fifth, stop Iran and its allies decisively; and sixth, push for normalization and agreements that will lead to peace accords with Arab countries," he said.

Remaining confident that he would win the upcoming elections in March, third in a year, Netanyahu plans to maintain his immunity against the corruption allegations. To this end, he needs to secure at least 61 seats in the Knesset. His main rival Benny Gantz, leading the Blue and White Party said, "It appears that the Netanyahu, who is leading the State of Israel down a path of corruption, will continue to lead Likud."

During his speech, Netanyahu had to take shelter as rockets were fired from Gaza. Being escorted by bodyguards, he was taken to a shelter after the sirens wailed. In return, the Israeli air forces bombed certain positions in the Gaza Strip. Despite the ongoing tensions and attempts to make peace with Hamas, Netanyahu failed to mitigate the situation. On the contrary, his tough policies against Palestinians have only worsened the situation.