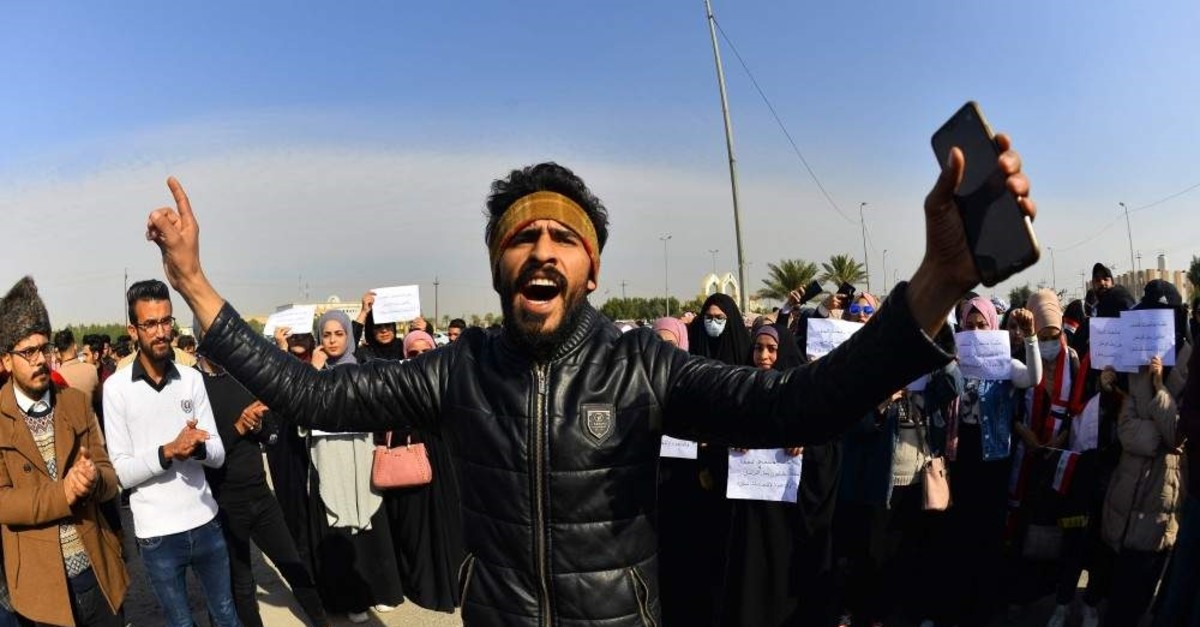 Iraqi university students take part in an anti-government demonstration in the holy shrine city of Najaf on December 29, 2019. - The youth-led protests demand the ouster of the entire political class that has run the country in the aftermath of the 2003 US-led invasion that toppled dictator Saddam Hussein. (Photo by Haidar HAMDANI / AFP)
by Compiled from Wire Services Dec 29, 2019 8:32 pm

At least 68 Iraqi protesters have been kidnapped by unknown actors due to their involvement in protests that began to grip the south and center of the country on Oct. 1. Meanwhile, 56 remain missing according to a statement from Iraq's semi-official Human Rights Commission on Saturday.

Faisal Abdullah, a member of the commission claimed on Saturday that 56 protesters still remain missing after reports they were abducted. Another 12 have been released, he said, quoting data recorded by his group, the Iraqi government and a committee looking into abduction linked to the country's Interior Ministry.

The commission's representative also announced that at least 490 protesters have been killed in Baghdad and southern cities in nearly three months of violent rallies.

The 490 killed include 33 activists "assassinated" in targeted killings. More than 22,000 have been injured.

The Human Rights Commission doesn't assign blame for the violence. The U.N. has said it received credible allegations of deliberate killings, abductions and arbitrary detentions carried out by unknown armed men described as "militia," "unknown third parties' and "armed entities."

Iraq has been roiled by protests since Oct. 1 in which demonstrators have taken to the streets to decry corruption, poor services and a lack of jobs. They have also called for an end to the political system imposed after the 2003 U.S.-led invasion. The mass uprisings prompted the resignation of former Prime Minister Adel Abdul-Mahdi late last month. The protesters demand an independent candidate to hold the post.

The leaderless protests – the most serious challenge for the ruling class in over a decade – were met with a violent crackdown by security forces. They dispersed crowds with live fire, tear gas and sonic bombs, leading to fatalities.

The protesters have yet to accept a premier that would bring a sense of political stability to the country.

On Thursday, Iraqi lawmakers rejected the resignation of President Barham Salih, who wanted to step down due to pressure to choose Basra Gov. Asaad al-Eidani as the new premier.

Al-Eidani, who was proposed by the parliament's majority-holder Al-Binaa Alliance, is also the third name rejected by protesters to lead the new government, as he is accused of responsibility in the killing of demonstrators in Basra.

The situation in Iraq remains unclear, and protesters are determined to have a new independent premier who does not hail from current political circles.