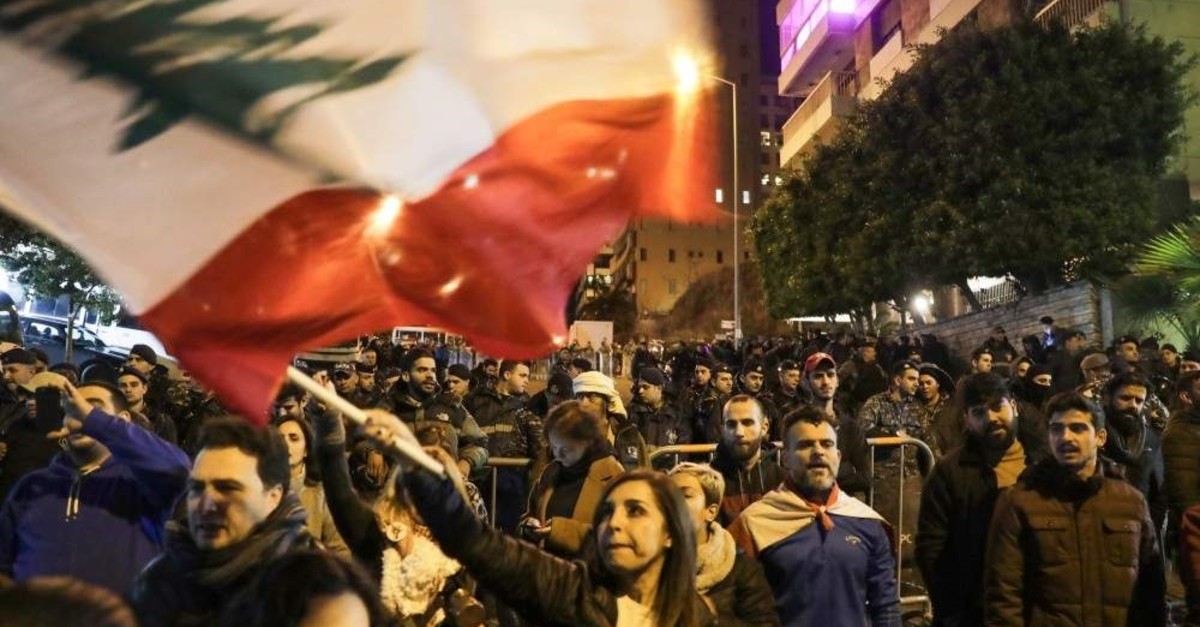 Lebanese protesters wave the national flags as they gather outside the house of Lebanon's new prime minister in the capital Beirut, calling for his resignation less than 10 days after he was appointed, Dec. 28, 2019. (Photo by ANWAR AMRO / AFP)
by Yusuf Selman İnanç Dec 29, 2019 7:08 pm

Lebanese people are out on the streets calling on recently-appointed Hassan Diab to resign. This indicates that they are asking for a fundamental change in the country which is being prevented mainly by its sectarian constitution

The appointment of Hassan Diab as Lebanon's new prime minister did little to mitigate protests. Protesters have continued to maintain pressure, calling on Diab to resign barely 10 days after his accession to the office. The demonstrations indicate that Lebanese people will calm down with a simple replacement of the prime minister. The increasing discontent with the country's political and economic situation demonstrates that people are asking for a more fundamental change.

Since October, thousands of Lebanese people have been in the streets to protest the deteriorating economic situation as well as the ruling elite. Beginning as a reaction to proposed taxes on internet call services like WhatsApp, the protests have since gained momentum as anger continues to grow against the ruling elite and the country's political system at large.

At the national level, the protests aim to address the deterioration of economic opportunities in the country. High unemployment, high tax rates, a lack of infrastructure, energy shortages and limited access to basic needs have all been sources of public frustration. At the international level, Lebanese demonstrators have accused Iran of intervening in their country's politics and diminishing the already fragile stability.

One of the main demands was the resignation of the Prime Minister, Saad Hariri. He did so and declared that he would refrain from politics. However, the new appointee, Hassan Diab, supported by Hezbollah, has failed to calm the anger. It was obvious because the protesters were chanting slogans against Hezbollah. They consider Hezbollah as an obstacle to the country's political stability.

Hezbollah, on the one side, has been fighting in Syria against the Western-backed opposition groups. On the other side, it has been maintaining an unending stalemate with Israel. As a result, Lebanon is affected by regional problems and is directly dragged into the troubles. To make matters worse, Hezbollah supporters appear to be in the streets as well. Their clashes with other protesters resemble scenes that of the Lebanese Civil War, which lasted from 1975 to 1990.

In spite of Diab's appointment, the country does not have a cabinet. He has held two meetings with President Michael Aoun. While Diab initially planned to create a technocrat cabinet, Aoun and his Shiite allies, including the Hezbollah-backed Amal movement, are not convinced. Instead, the cabinet is expected to be created through selecting names from the parliament.

However, for more than a year, Lebanon has been experiencing a government crisis, failing to form a government on which each side is compromising. Its political system does not allow the decision-makers and the people to find a solution to the unending political crises. According to the Lebanese constitution, the president must be a Christian, while the prime minister and parliamentary speaker must be Muslims. The prime minister has to be elected from among Sunni candidates, whereas the speaker must be a Shiite.