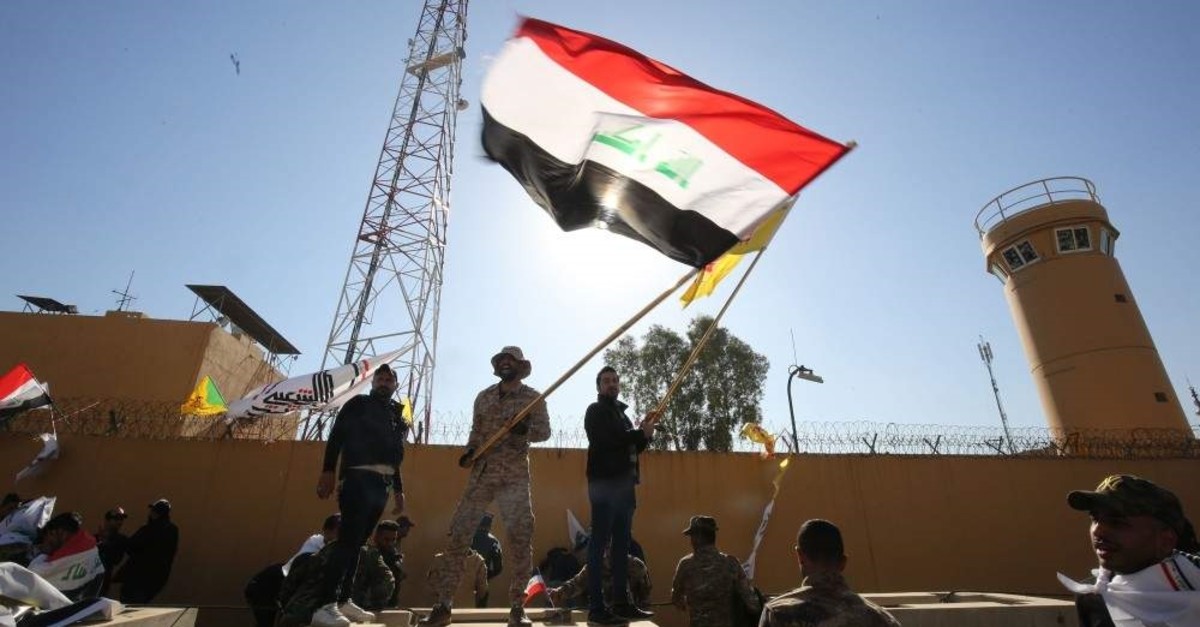 Iraqi protesters wave a national flag in front of the outer wall of the US embassy in Baghdad's Green Zone during an angry demonstration on Dec. 31, 2019 to denounce weekend US air strikes that killed Iran-backed fighters in Iraq. (AFP Photo)
by Daily Sabah with Agencies Dec 31, 2019 7:58 pm

Supporters of Iraq's pro-Iranian paramilitary units, Hashed al-Shaabi, began leaving the encircled U.S. embassy in Baghdad on Wednesday but hardliners insisted they would stay, a day after their dramatic incursion into the compound.

Paramilitary groups who have been protesting against U.S. airstrikes in Iraq told their supporters to withdraw from the perimeter of the U.S. embassy. The Popular Mobilization Forces (PMF) umbrella group of mainly Shiite militia said the crowds should withdraw now that their "message has been heard," and in deference to the Iraqi government which sought "to preserve the prestige of the state." It called on supporters to regroup outside the high-security Green Zone where the mission is located, but a leading commander in Kataeb Hezbollah, the group targeted in the U.S. raids, said that they would remain at the embassy.

On Wednesday morning, the crowds drew closer to the single wall separating them and the larger diplomatic compound, setting U.S. flags on fire. In response, the U.S. Marines guarding the embassy fired tear gas after the protesters lit a fire on the roof of the reception area. Smoke rose from the building. Several of protesters were reported wounded and ferried away by ambulances.

The embassy attack, one of the worst in recent memory, followed deadly U.S. airstrikes on Sunday that killed 25 fighters of the Iran-backed Kataeb Hezbollah militia in Iraq. The U.S. military said the airstrikes were in retaliation for last week's killing of an American contractor in a rocket attack on an Iraqi military base that it had blamed on the militia.

It was the first time in years protesters have been able to reach the U.S. embassy, which is sheltered behind a series of checkpoints in the high-security Green Zone. The protests mark a new turn in the shadow war between Washington and Tehran playing out across the Middle East, and raise questions over the continued U.S. military presence in Iraq. U.S. President Donald Trump, who faces re-election in 2020, on Tuesday threatened to retaliate against Iran but said later he did not want to go to war.

The U.S. has blamed Iran for the attack but also pressured Iraqi security forces to step up, alarmed that the mobs were able to reach the embassy so easily. Charging that Iran was “fully responsible” for an attack on the U.S. Embassy in Iraq, President Donald Trump ordered about 750 U.S. soldiers deployed to the Middle East as about 3,000 more prepared for possible deployment in the next several days. No U.S. casualties or evacuations were reported after the attack Tuesday by dozens of Iran-supported militiamen. U.S. Marines were sent from Kuwait to reinforce the compound.

Defense Secretary Mark Esper said Tuesday night that “in response to recent events” in Iraq, and at Trump's direction, he authorized the immediate deployment of the infantry battalion from the Army's 82nd Airborne Division at Fort Bragg, North Carolina. He did not specify the soldiers’ destination, but a U.S. official familiar with the decision said they will go to Kuwait. “This deployment is an appropriate and precautionary action taken in response to increased threat levels against U.S. personnel and facilities, such as we witnessed in Baghdad today,” Esper said in a written statement.

Additional soldiers from the 82nd Airborne's quick-deployment brigade, known officially as its Immediate Response Force, were prepared to deploy, Esper said. The U.S. official, who provided unreleased details on condition of anonymity, said the full brigade of about 4,000 soldiers may deploy. At the time of the attack the U.S. had about 5,200 troops in Iraq, mainly to train Iraqi forces and help them combat the Daesh terrorist group. The 750 soldiers deploying immediately were in addition to 14,000 U.S. troops who had deployed to the Gulf region since May in response to concerns about Iranian aggression, including its alleged sabotage of commercial shipping in the Persian Gulf. Tensions have soared around the Strait of Hormuz, a critical oil shipping waterway that lies between Iran and Oman. In 2019, The U.S. has boosted its military presence in the region and at least six oil tankers have been targeted in the Gulf of Oman in unclaimed acts of sabotage that the U.S. blames on Iran. Iran has denied any involvement in those attacks.

Trump is under pressure from some in Congress to take a hardline approach to Iranian aggression, which the U.S. says included an unprecedented drone and missile attack on the heart of Saudi Arabia's oil industry in September. More recently, Iran-backed militias in Iraq have conducted numerous rocket attacks on bases hosting U.S. forces.

Even as Trump has argued for removing U.S. troops from Mideast conflicts, he also has singled out Iran as a malign influence in the region. After withdrawing the U.S. in 2018 from an international agreement that exchanged an easing of sanctions for curbs on Iran's nuclear program, Trump ratcheted up sanctions. Those economic penalties, including a virtual shut-off of Iranian oil exports, are aimed at forcing Iran to negotiate a broader nuclear deal. But critics say that pressure has pushed Iranian leaders into countering with a variety of military attacks in the Gulf.