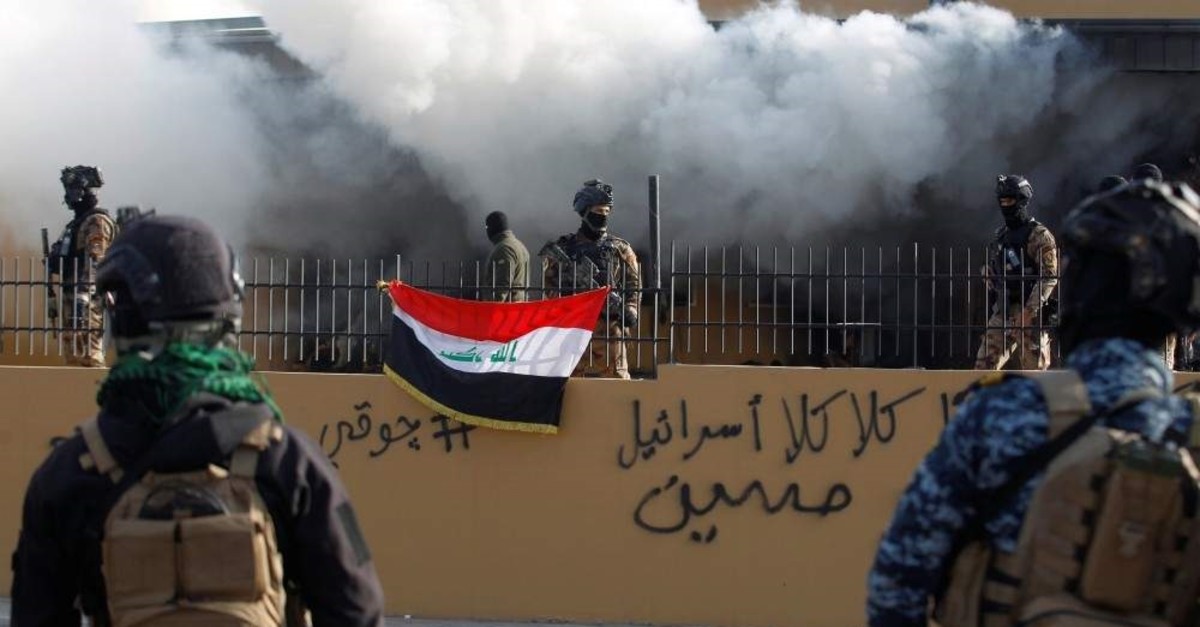 As the U.S. Embassy siege by pro-Iran protesters in Baghdad lasted just over a day, Iraq has been struggling to keep up its precarious balancing act between its allies Washington and Tehran.

Amid tensions mounting following the U.S. withdrawal from the 2015 nuclear pact with Iran, the regional rivalry has been partly playing out among Iraq's security forces. The U.S. has trained army units and elite troops, while Iran has assisted the Hashd al-Shaabi forces. On Tuesday, hundreds of Hashd supporters stormed the high-security Green Zone and besieged the U.S. Embassy.

After America’s 2003 invasion of Iraq to oust Saddam Hussein, American troops and Iranian-backed militiamen fought pitched battles around the country, and scores of U.S. troops were killed or wounded. The U.S. has also blacklisted a host of Iraqi political figures, Hashd units and even banks in recent months and has suggested dozens more could be sanctioned. The U.S. also declined to invite outgoing Iraqi Prime Minister Adel Abdul-Mahdi to Washington because American officials saw him as "too close" to Iran. Following weeks of deadly protests that have signaled a period of political instability caught between U.S. and Iranian interests, Abdul-Mahdi announced his resignation in December 2019.

The protests mark a new turn in the shadow war between Washington and Tehran playing out across the Middle East, and raise questions over the continued U.S. military presence in Iraq. Revolutionary Guards Commander Brig. Gen. Hossein Salami said on Thursday that Iran was not moving toward a war but was not afraid of any conflict, the semiofficial Tasnim news agency reported after U.S. President Donald Trump said Tehran was behind anti-U.S. protests in Iraq. Iran's Army chief Maj. Gen. Abdolrahim Mousavi said Thursday his forces were ready to confront the "enemy."

The U.S. has blamed Iran for the attack but also pressured Iraqi security forces to step up, alarmed that the mobs were able to reach the embassy so easily. Iran has rejected the accusation. Charging that Iran was “fully responsible” for the embassy attack, Trump ordered about 750 U.S. soldiers to be deployed to the Middle East as about 3,000 more prepared for possible deployment in the next several days.

The 750 soldiers deploying immediately were in addition to the 14,000 U.S. troops deployed to the Gulf region since May in response to concerns about Iranian aggression, including its alleged sabotage of commercial shipping in the Persian Gulf. Tensions have soared around the Strait of Hormuz, a critical oil shipping waterway that lies between Iran and Oman. In 2019, the U.S. boosted its military presence in the region and at least six oil tankers were targeted in the Gulf of Oman in unclaimed acts of sabotage that the U.S. blames on Iran. Iran has denied any involvement in those attacks.

On May 8, 2019, U.S. Secretary of State Mike Pompeo made an unannounced trip to the Iraqi capital following the abrupt cancelation of a visit to Germany; a move made parallel to the U.S. saying it had picked up intelligence that Iran was threatening American interests in the Middle East.