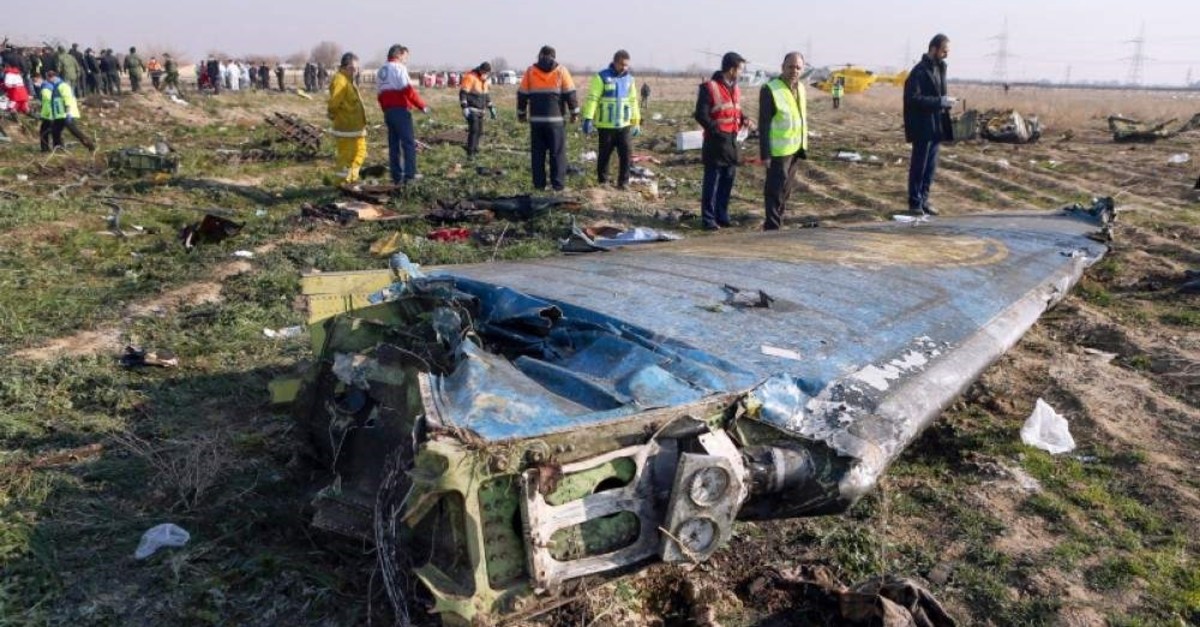 This file handout photo provided by the IRNA news agency shows rescue teams work at the scene of a Ukrainian airliner that crashed shortly after takeoff near Imam Khomeini Airport in the Iranian capital Tehran, on Jan. 8, 2020. (Photo by Akbar TAVAKOLI / IRNA / AFP)
by Compiled from Wire Services Jan 10, 2020 5:18 pm

Iran on Friday denied Western allegations that the Ukrainian jetliner that crashed outside Tehran was brought down by an Iranian missile and called on the U.S. and Canada to share any information they have on the crash, which killed all 176 people on board.

Western leaders said the plane appeared to have been unintentionally hit by a surface-to-air missile near Tehran, just hours after Iran launched a series of ballistic missiles at two U.S. bases in Iraq to avenge the killing of its top general in an American airstrike last week.

If a missile had hit the plane, it would have exploded right away and the debris would be much more scattered, Ali Abedzadeh, head of Iran's national aviation department, told a press conference. He said that the plane, engulfed in flames, continued to fly for more than 1.5 minutes. "What is obvious for us, and what we can say with certainty, is that no missile hit the plane," Abedzadeh said. "If they are really sure, they should come and show their findings to the world" in accordance with international standards, he added.

"The plane was heading north but crashed facing southwest. This means the plane wanted to return to the airport," he said, noting that the pilots might have tried emergency landing as the plane contacted the ground through the body.

Hassan Rezaeifar, the head of an Iranian investigation team on Friday told the same press conference that recovering data from the black box flight recorders could take more than a month and that the entire investigation could stretch into next year. He also said Iran may request expert help from Russia, Ukraine, France and Canada if it is not able to extract the flight recordings. He also said the flight had been delayed by about an hour because the pilot decided to unload part of the luggage as the flight was overweight.

The ballistic missile attack on the bases in Iraq caused no casualties, raising hopes that the standoff over the killing of Gen. Qassem Soleimani would end relatively peacefully, though Iran has sent mixed signals over whether its retaliation is complete.

If the U.S. or Canada were to present incontrovertible evidence that the plane was shot down by Iran, even if unintentionally, it could have a dramatic impact on public opinion in Iran. The Iranian public had rallied around the leadership after the killing of Soleimani last Friday, with hundreds of thousands joining the general's funeral processions in several cities, in an unprecedented display of grief and unity. But sentiments in Iran are still raw over the government's crackdown on large-scale protests late last year sparked by the worsening economic situation. Several hundred protesters were reported to have been killed in the clampdown. Those fissures could quickly break open again if public evidence is presented that Iranian authorities were responsible for the deaths of 176 people, mainly Iranians or dual Iranian-Canadian citizens.

The state-run IRNA news agency quoted a Foreign Ministry spokesman as saying Iran "has invited both Ukraine and the Boeing company to participate in the investigations." Abbas Mousavi said it will also welcome experts from other countries whose citizens died in the crash, later adding a 10-member Canadian delegation was heading to Iran to assist victims' families. Iran had initially said it would not allow Boeing to take part in the probe, going against prevailing international norms on crash investigations.

It later invited the U.S. accident-investigating agency to take part in the investigation. The National Transportation Safety Board said late Thursday that it would "evaluate its level of participation," but its role could be limited by U.S. sanctions on Iran. U.S. officials have also expressed concern about sending employees to Iran because of the heightened tensions. Under rules set by a U.N. aviation organization, the NTSB is entitled to participate because the crash involved a Boeing 737-800 jet that was designed and built in the U.S. There was no immediate comment from Boeing.

The French air accident investigation agency, known by the French acronym BEA, is also taking part in the probe. The plane's engine was designed by CFM International, a joint company between French group Safran and U.S. group GE Aviation.

U.S., Canadian and British officials said Thursday it is "highly likely" that Iran shot down the plane that crashed near Tehran late Tuesday. U.S. officials said the jetliner might have been mistakenly identified as a threat. Canadian Prime Minister Justin Trudeau, whose country lost at least 63 citizens in the downing, said, "we have intelligence from multiple sources including our allies and our own intelligence."

Later on Thursday, an Iranian government official said the country has begun investigations into the cause of the crash in accordance with international standards. "We are calling on the Canadian prime minister and any other government that has information about the crash to hand it over to the investigation committee in Iran," Iranian Foreign Ministry Spokesman Abbas Mousavi was quoted as saying by state news agency IRNA.

"The evidence indicates that the plane was shot down by an Iranian surface-to-air missile," he said. U.K. Prime Minister Boris Johnson and Australian Prime Minister Scott Morrison offered similar statements.

The U.S. officials did not say what intelligence they had that pointed to an Iranian missile, believed to be fired by the Russian Tor system, known to NATO as the SA-15. But they acknowledged the existence of satellites and other sensors in the region, as well as the likelihood of communication interceptions and other similar intelligence. Western countries may hesitate to share information on such a strike because it comes from highly classified sources.

Ukraine's President Volodymyr Zelenskiy said, "the missile theory is not ruled out, but it has not been confirmed yet." In a Facebook post, he reiterated his call "on all international partners" – the U.S., Britain and Canada in particular – to share data and evidence relevant to the crash. He also announced plans to discuss the investigation with U.S. Secretary of State Mike Pompeo later Friday.

Meanwhile, video footage shared on social media showed the moment the plane was apparently hit by a missile, minutes after takeoff, as confirmed by The New York Times' visual investigation team.

The NYT said the video showed that a small explosion took place when the plane was hit but the plane itself did not explode and continued flying for several minutes. The airliner later exploded and crashed while returning to the Tehran airport, the NYT said, citing other verified videos.

Iranian officials initially said the plane appeared to have crashed because of technical difficulties. A preliminary Iranian investigative report released Thursday said that the airliner pilots never made a radio call for help and that the aircraft was trying to turn back for the airport when the burning plane went down. The Iranian report suggested that a sudden emergency struck the Boeing 737, operated by Ukrainian International Airlines, just minutes after taking off from Imam Khomeini International Airport in Tehran early Wednesday.

Those findings are not inconsistent with the effect of a surface-to-air missile. Such missiles are designed to explode near aircraft, shredding them with shrapnel. There is no need to score a direct hit, and a stricken plane may look like it is turning back when in fact it is disintegrating.

Abedzadeh had earlier said that by law there is "full coordination" between the country's air defenses and the civil aviation system. He said it is "absolutely impossible" that the armed forces would shoot down a civilian plane. He said authorities have recovered two black box flight recorders, saying they are "damaged" but readable, which may shed further light on what caused the crash.

Ukraine said Iranian authorities allowed Ukrainian investigators to examine fragments of the plane late Thursday. "It is too early on in the investigation to reveal specific details," the statement from the Ukraine president's office said. It added that DNA is being collected from relatives of Ukrainians who died in the crash to identify the bodies.