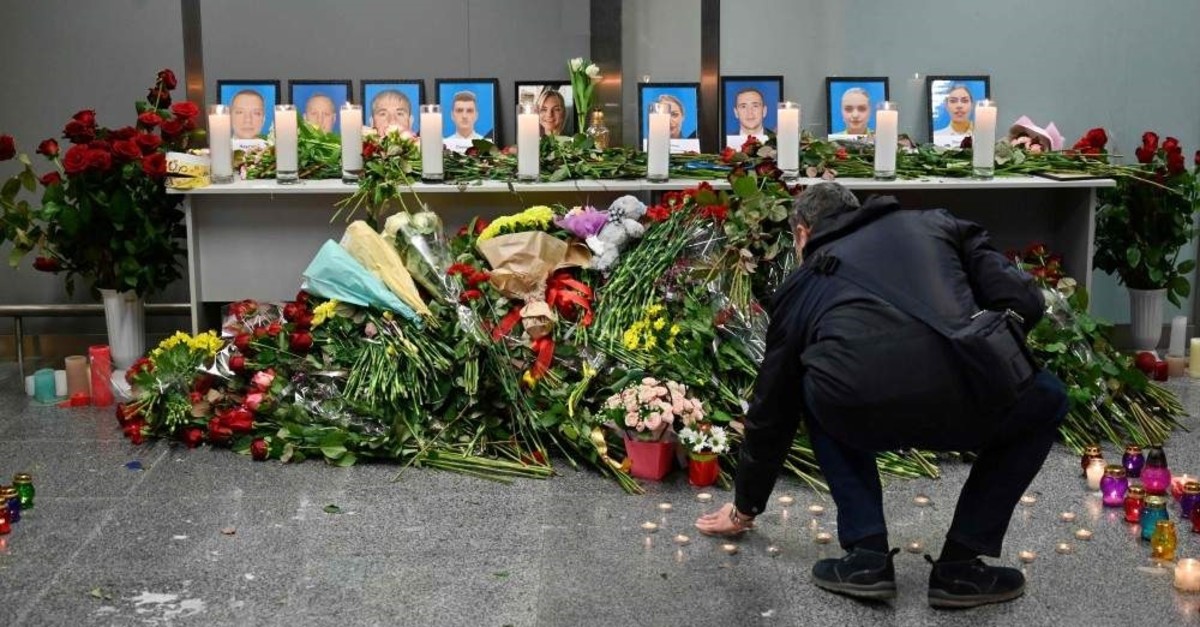 A man reacts in front of a memorial for the victims of the Ukraine International Airlines Boeing 737-800 crash in the Iranian capital Tehran, at the Boryspil Airport outside Kyiv, Ukraine,Jan. 8, 2020 (AFP Photo)
by Daily Sabah with AP Jan 11, 2020 12:58 pm
Iranian President Hassan Rouhani offered his condolences over the downing of a Ukrainian airliner near Tehran, saying the country deeply regretted "this disastrous mistake."

"This painful accident is not something that can be easily overlooked," he said in a statement Saturday.

"A further investigation is needed to identify all the causes and roots of this tragedy and prosecute the perpetrators of this unforgivable mistake."

The president said the Iranian Foreign Ministry would work to identify and return the bodies of the victims, while the government would also take all necessary measures to compensate and sympathize with the victims' families.

Iran on Saturday acknowledged that its armed forces had "unintentionally" shot down the Ukrainian jetliner that crashed earlier this week, killing all 176 aboard, after the government had repeatedly denied Western accusations that it was responsible.

The plane was shot down early Wednesday, hours after Iran launched a ballistic missile attack on two military bases housing U.S. troops in Iraq in retaliation for the killing of Iranian Gen. Qassem Soleimani in an American airstrike in Baghdad. No one was wounded in the attack on the bases.

A military statement carried by state media said the plane was mistaken for a "hostile target" after it turned toward a "sensitive military center" of the Revolutionary Guard. The military was at its "highest level of readiness," it said, amid the heightened tensions with the U.S.

"In such a condition, because of human error and in an unintentional way, the flight was hit," the military said. It apologized and said it would upgrade its systems to prevent future tragedies.

Those responsible for the strike on the plane would be prosecuted, the statement added.