Where does Iraq stand in the US-Iran crisis? 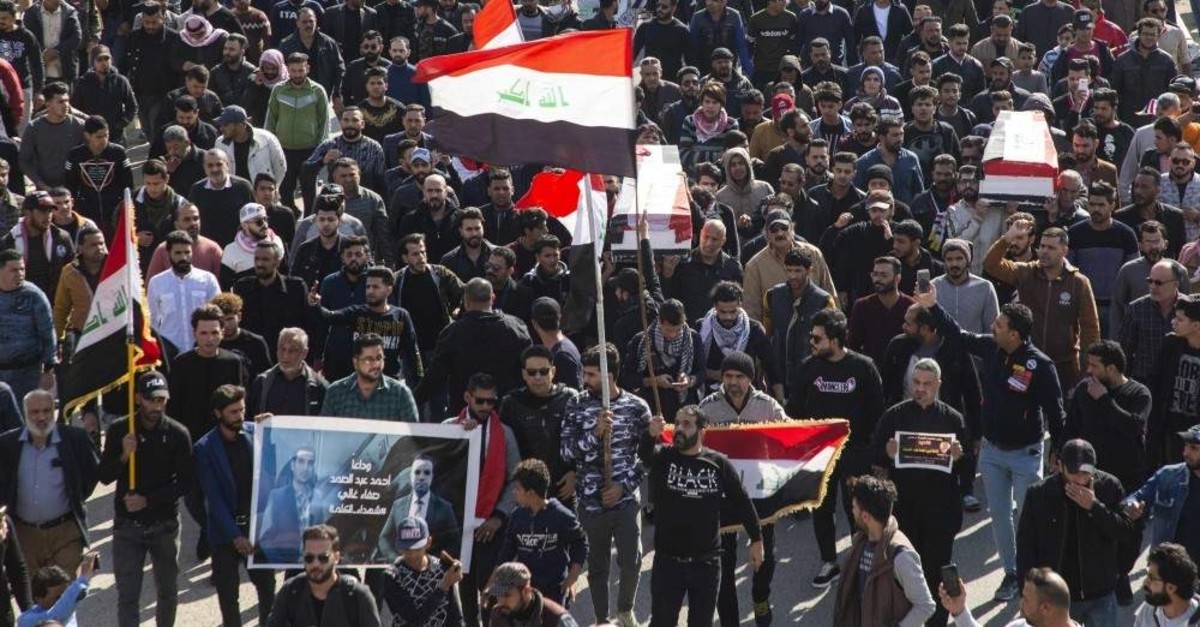 The Iraqi government, which is under Iranian influence for religious reasons and needs the U.S. for economic reasons, seems to have been caught in the middle of everything. Millions of Iraqis are demanding that their country be able to speak up for its own territories

Since the U.S. killed Qassem Soleimani, the head of Tehran's elite Iranian Revolutionary Guard Corps (IRGC) Quds Force, many conflicting statements have come from the Iraqi side. While the country would like the U.S. to leave its territories and its government seems to have surrendered itself to Iran, people on the streets are unhappy with the interferences of both Iran and the U.S.

However, sectarianism, along with economic and social problems and political weaknesses, has resulted in the country being caught in the middle. When listing the problems facing Iraq, which include the presence of terror groups such as Daesh and the PKK, the country seems to be a failed state unable to prevent its territories from becoming a battlefield for warring regional and international actors.

The U.S. carried out an operation on Iraqi soil to kill Soleimani along with some other important names, including his adviser and the head of the Hashd al-Shaabi, Abu Mahdi al-Muhandis. In response, Iran has sent missiles to U.S. bases in Iraq, killing Iraqis but failing to strike U.S. troops. The U.S. has been pressuring the Iraqi government to review its ties with Iran, whereas Iran has been pressuring Iraq to force U.S. troops out.

Despite the legal warnings by Iraqi authorities, it is unthinkable that the U.S. would make such a significant change in its policy in the Middle East just because a legal warning came from the Iraqi government. The U.S. has begun threatening Iraq with several severe sanctions in the case that American troops are forced to leave.

Meanwhile, Shiite leaders such as Muqtada al-Sadr are important players in Iraqi politics since millions of people adhere to and follow them. They have their own demands either in religious affairs or social ones. They have been using their influence over the people as leverage against the Iraqi government.

More dangerously, Daesh has not been vanquished totally and it may make a comeback if the combat against Daesh is weakened. Daesh has been the player that unified Iran and the U.S. for the same cause. Soleimani was Iran's key player in organizing the paramilitary groups against Daesh, while the U.S. has brought the West together. In a recent statement, Daesh said it will re-organize itself while regional and international actors are at odds with each other.

While Iran-influenced discussions about the future of U.S. soldiers in Iraq continue, hundreds of thousands of people are in the streets, chanting slogans against both Iran and the U.S.

The people's demands may not seem realistic when considering the political and economic circumstances. However, their slogans show that Iraqis would like to have a unified country not only territorially but also ideologically. It is a fact that these protests were important for leaving the sectarian discourse behind. The discourse is largely and mostly employed by pro-Iranian politicians.

However, as seen in the combat against Daesh, the sectarian discourse has been threatening the country's unity. During operations against Daesh, which were mostly led by Soleimani and his proxies, the Sunni residents of the Daesh-occupied areas were subjected to several brutalities. Regions like Fallujah witnessed collective punishment. It is true that Sunni tribes of the region initially pledged support to Daesh but pulled back after it became clear that Daesh was indifferently slaughtering the masses.

Despite the fact that the younger generation is in favor of leaving sectarian and ethnic conflicts behind, the conflict among Iran, the Gulf and the U.S. fuel the sectarian tensions. "History repeats itself" seems to be a valid saying for Iraq since Shiites along with Kurds suffered under the dictatorship of the ousted president, Saddam Hussein. Now, under the Iran-backed government, Sunni residents are suffering while the Kurds have created a relatively safe haven for themselves in the country's north. Yet, when considering the desire for independence, which was embodied in a referendum in 2017, their integration into Iraq does not go beyond a territorial one.

The latest escalation of tensions between the U.S. and Iran has clearly demonstrated that Iraq is caught in the middle. In his conversation with U.S. President Donald Trump, Iraqi Prime Minister Adel Abdul-Mahdi reportedly said: "Iraq is between friends who are 5,000 miles away from us and a neighbor we've had for 5,000 years. We cannot change geography and we cannot change history, and this is the reality in Iraq."

Despite these words, the Iraqi government decided to expel American troops, and the pro-Iranian demonstrators, who have been favoring the sectarian discourse, attacked the U.S. Embassy in Baghdad. It was an embarrassment for Iraq when U.S. Secretary of State Mike Pompeo said the U.S. would not withdraw its troops.

"We are happy to continue the conversation with the Iraqis about what the right structure is," Pompeo said, adding that the U.S. will continue fulfilling its mission. In other words, the U.S. does not care about the Iraqi government's authority in the country.

The economic problems, which forced people to initiate the mass demonstrations, along with the weakness of the political authority, have put the Iraqi government in a fragile situation. The Iraqi government is under Iranian influence due to religious reasons but needs the U.S. for economic aid and to combat Daesh. At the same time, millions of Iraqis would like to see a dignified government and state, which would govern as an independent actor in its own country.