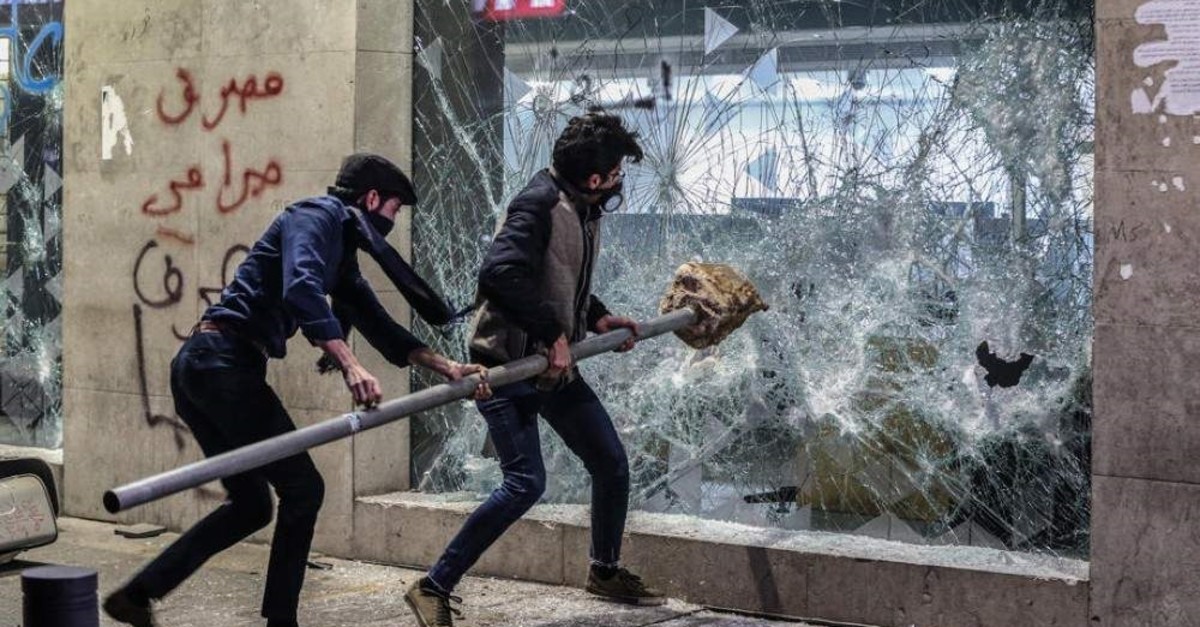 Anti-government protesters clash with riot police as they block a road and calling for 'the fall of the rule of the bank' during a protest in front of the Lebanese Central Bank headquarters, Beirut, Jan. 14, 2020. (EPA Photo)
by Compiled from Wire Services
Jan 15, 2020 6:09 pm

Lebanese security forces arrested 59 people, the police said Wednesday, following clashes overnight outside the central bank as angry protesters vented their fury against the country's ruling elite and the worsening financial crisis. It was one of the largest wave of arrests since Lebanon's anti-government protest movement began on Oct. 17 demanding a complete government overhaul.

As the movement nears the start of its fourth month, banks have become a prime target of demonstrators who charge them with driving the country toward its worst economic crisis since the 1975-1990 civil war. On Wednesday morning in Hamra, a banking hub, almost every branch was left with smashed display windows, destroyed ATMs and graffiti-daubed walls, after what the Association of Banks condemned as a "savage" onslaught. Banks opened their doors despite the wreckage, as cleaners wiped spray paint off walls and workers replaced window fronts. With some ATMs destroyed beyond repair, passersby looked on in astonishment at the aftermath of the nighttime assault on banks.

Outgoing Prime Minister Saad Hariri, who resigned shortly after the protests first began in mid-October, said the violence in Hamra was "unacceptable" and aggression on the heart of the capital. A new prime minister-designate was named in December but has still been unable to form a new government.

Lebanon is facing its worst economic crisis in decades, with the local currency plummeting before the dollar, losing over 60% of its value over the past few weeks, while sources of foreign currency have dried up. Meanwhile, banks have imposed informal capital controls limiting the withdrawal of U.S. dollars and foreign transfers in the country, which relies heavily on imports of basic goods. Panic has set in among residents who fear their deposits are in danger. Lately, protesters had focused their ire on banks, rallying at the premises or outside banks and demanding access to their deposits. Dozens have also taunted politicians who showed up in shopping malls or restaurants, sometimes chasing them out of public places and decrying their failure to address the economic crisis.

"Lebanon's politicians have done little to stop living standards from plummeting and have not responded to protesters' concerns about the worsening economic crisis," said Joe Stork, deputy Middle East director at Human Rights Watch (HRW). "Their dereliction is threatening to drastically worsen access to health care and the availability of medical supplies."