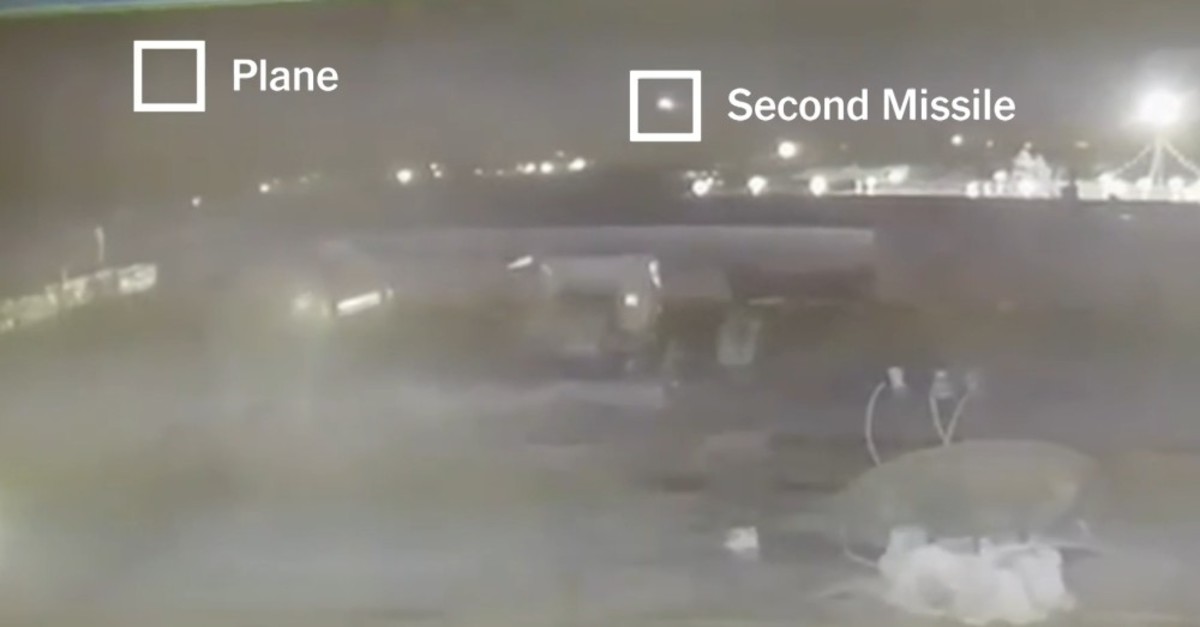 Screenshot of the new footage showing the firing of two missiles at the Ukrainian plane (New York Times Screenshot)
by Jan 15, 2020 9:34 am

New video footage has emerged showing two Iranian missiles tearing through the night sky and hitting a Ukrainian passenger plane, sending the aircraft down in flames and killing all 176 passengers and crew on board.

The projectiles were fired 30 seconds apart and explain why the plane's transponder was not working as it hurtled to the ground – it was disabled by the first strike, before being hit by a second, said the New York Times, which published the verified security camera footage Tuesday.

The blurry film, shot from a rooftop in a village four miles from an Iranian military site, shows the Kiev-bound plane on fire and circling back to Tehran's airport, the Times said. Minutes later, the aircraft exploded and crashed.

Iran had for days denied Western claims that the Boeing 737 had been downed by its missiles.

The incident happened when Iran's armed forces were on heightened alert after launching a volley of missiles at Iraqi bases hosting U.S. troops in retaliation for the killing of top general Qasem Soleimani on January 3.

Iran has struggled to contain the fallout over its handling of the air disaster and the tragedy has seen hundreds of angry protesters, most of them students, take to the streets.

New videos circulating on social media purported to show fresh protests on Tuesday evening at universities in Tehran, along with clashes between students and Basij militia loyal to the establishment. It was not possible to immediately verify the videos.

Earlier, AFP correspondents said around 200 mainly masked students gathered at Tehran University and were locked in a tense standoff with youths from the Basij. Kept apart by security forces, the groups eventually parted ways.

Around 30 people have been arrested in the protests over the air disaster, according to judiciary spokesman Gholamhossein Esmaili.

Tehran said on Tuesday it had made its first arrests over the shooting down of the plane, though it gave no details.

Recent protests have been much smaller than nationwide demonstrations against fuel price hikes that turned deadly in November.

But one commentator said the latest rallies showed there was a "real rift between the people and the authorities".

"I hope that (police restraint) will continue and that no lives are lost because this could be a catalyst for more protests," Mehdi Rahmanian, director of reformist daily Shargh, told AFP.

In another sign of growing dissent, a group of artists canceled their participation in the Fajr festival, held each year on the anniversary of the 1979 Islamic Revolution, according to Hamshahri newspaper.

President Hassan Rouhani said Tuesday Iran's judiciary "must form a special court with a high-ranking judge and dozens of experts... The whole world will be watching."

The office of Ukraine's President Volodymir Zelenskiy said he spoke to Canada's premier Justin Trudeau on Tuesday for a third time since the crash, with the latter asking for help from Kyiv in liaising with Iranian authorities to help identify bodies of Canadian citizens.