Iran to send black boxes of downed jet to Ukraine 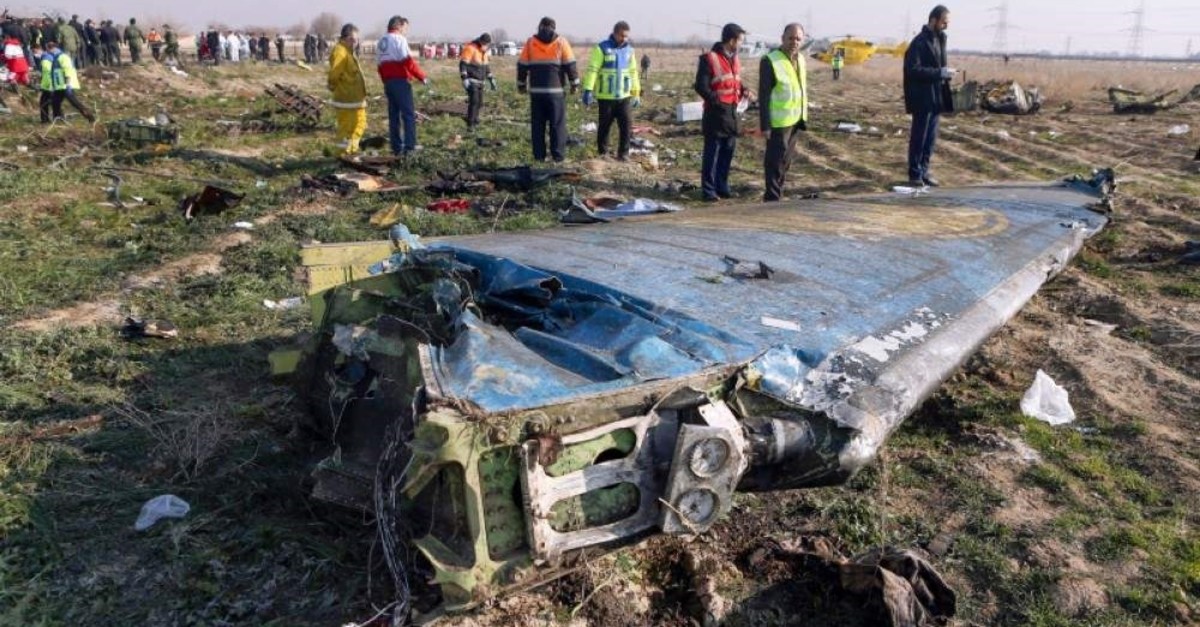 In this file photo taken on January 8, 2020 rescue teams are seen at the scene of a Ukrainian airliner that crashed shortly after take-off near Imam Khomeini airport in the Iranian capital Tehran. (IRNA via AFP)
by reuters Jan 18, 2020 7:18 pm

Iran said on Saturday it was sending to Ukraine the black boxes from a Ukrainian passenger plane that the Iranian military shot down this month, an accident that sparked unrest at home and added to pressure on Tehran from abroad.

Iran's Tasnim news agency also reported the authorities were prepared for experts from France, Canada and the United States to examine information from the data and voice recorders of the Ukraine International Airlines plane that came down on Jan. 8.

The plane disaster, in which all 176 aboard were killed, has added to international pressure on Iran as it grapples with a long-running row with the United States over its nuclear program that briefly erupted into open conflict this month.

The plane was shot down in error at a time when Iran was on high alert for a U.S. attack. But the military took days to admit they had brought it down, a delay that sparked protests.

Hassan Rezaifar, a director in charge of accident investigations at Iran's Civil Aviation Organization, said the aim was to read the information on the recorders "with the use of the expertise of the countries of France, Canada and America".

"If this effort is unsuccessful then the black box will be sent to France," he said, according to Tasnim, adding that black boxes were being sent to Kyiv at the request of Ukrainian experts in Tehran and that they would not be inspected in Iran.

The U.S.-built Boeing 737-800 was en route from Tehran to the Ukrainian capital. Most of those on board were Iranians or dual nationals. Canada had 57 citizens on board.

Canadian Prime Minister Justin Trudeau, who has been pressing for a full investigation into the plane downing, said on Friday Iran should send the black boxes to France.

France was one of the few countries with the ability to read the flight and cockpit data recorders from the jet, he told a news conference, adding they were badly damaged.

Ukraine has previously said it expected Iran to hand over the black boxes to Ukraine. The foreign minister also expects Iranian representatives to travel to Kyiv next week.

Canada, alongside Ukraine, Sweden, Afghanistan and Britain, which also had citizens on the flight, has called for a thorough investigation and compensation for the families.

The plane was brought down in the tense hours after Iran launched missiles at U.S. targets in Iraq in response to the U.S. killing of top Iranian commander Qassem Soleimani in a drone strike on Jan. 3 in Baghdad.

Iran's foreign ministry urged those involved in the crash to avoid making it an "excuse for political gestures".

Addressing the crisis, Iran's Supreme Leader Ayatollah Ali Khamenei told worshippers chanting "Death to America" at prayers on Friday that the disaster was a "bitter tragedy that burned through our heart".

But he said "some tried to use it as an excuse to overshadow the martyrdom of our great commander" Qassem Soleimani, Iran's most powerful general who was killed in the U.S. strike.

The death of Soleimani, portrayed as a national hero at home but viewed as a dangerous enemy in the West, prompted huge mourning ceremonies in Iran. Those were followed by street protests against the clerical system after the plane disaster.

Tension between Tehran and Washington has ratcheted higher since 2018, when the United States withdrew from Iran's nuclear pact with world powers and reimposed sanctions, and erupted into the tit-for-tat military strikes this month.