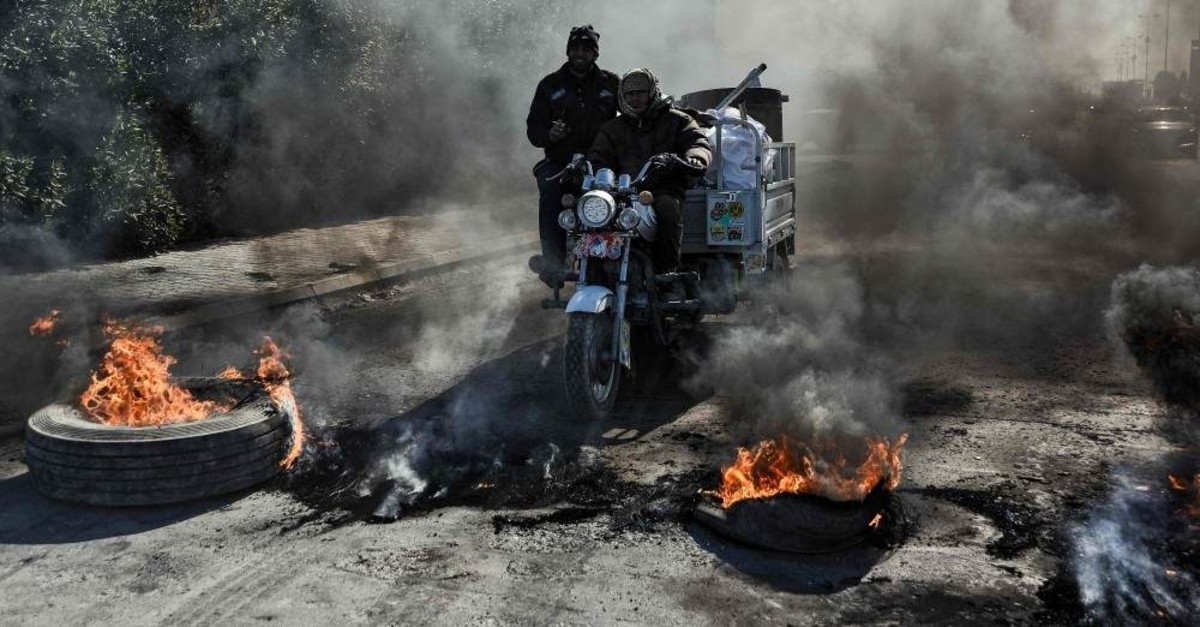 A motorcycle cart is seen before flaming tyres at a make-shift roadblock along the road leading to Najaf International Airport in the central Iraqi holy shrine city on Jan. 26, 2020. (Photo by Haidar HAMDANI / AFP)
by Compiled from Wire Services Jan 26, 2020 6:19 pm

Violence has resurged in the Iraqi capital Baghdad and the Shiite-majority south this week, with more than 15 people killed as protesters ramped up their road closures and sit-ins while security forces sought to snuff out the campaign.

Yesterday marked the second day of skirmishes between protesters and security forces who shot live rounds to hundreds of protesters, attempting to clear protest hotspots in Baghdad and southern Iraq.

Moqtada al-Sadr's supporters had bolstered the protesters and sometimes helped shield them from attacks by security forces and unidentified gunmen, but they began withdrawing from sit-in camps early on Saturday following al-Sadr's announcement that he would end his involvement in anti-government unrest.

The authorities' latest attempt to push back protesters and restore order came hours after al-Sadr's announcement, who has millions of supporters in Baghdad and the south.

Security forces proceeded to remove concrete barriers near Baghdad's Tahrir Square, where demonstrators have camped out for months, and across at least one main bridge over the Tigris River.

The youth-dominated protests erupted on Oct. 1 in outrage over lack of jobs, poor services and rampant corruption.

According to an AFP correspondent, yesterday saw hundreds of students protest In Basra over riot police's dismantling of their main protest camp the previous day.

Others gathered in the holy city of Najaf and university students led a protest in Kut, where they erected new tents to replace those taken down the day before.

University students have planned other rallies for this week.

The young demonstrators have mostly thrown rocks at riot police but some have tossed Molotov cocktails.

Yesterday, in Nasiriyah to the south, security forces also fired live rounds to disperse protesters, who were angered by authorities pushing them out of thoroughfares around their main protest camp in Habbubi Square.

At least 50 protesters suffered bullet wounds and around 100 were impacted by tear gas in brief skirmishes, a medical source told AFP.

Protesters are now specifically demanding snap elections, the appointment of an independent premier and the prosecution of anyone implicated in corruption or recent bloodshed.

Parliament has passed a new electoral law and Prime Minister Adel Abdel-Mahdi submitted his resignation in December, but he still serves in a caretaker role and authorities have otherwise failed to act on the protesters' demands.

Rights groups estimate the deaths of at least 500 people, mainly protesters, in violence since the demonstrations started in Iraq in early October.