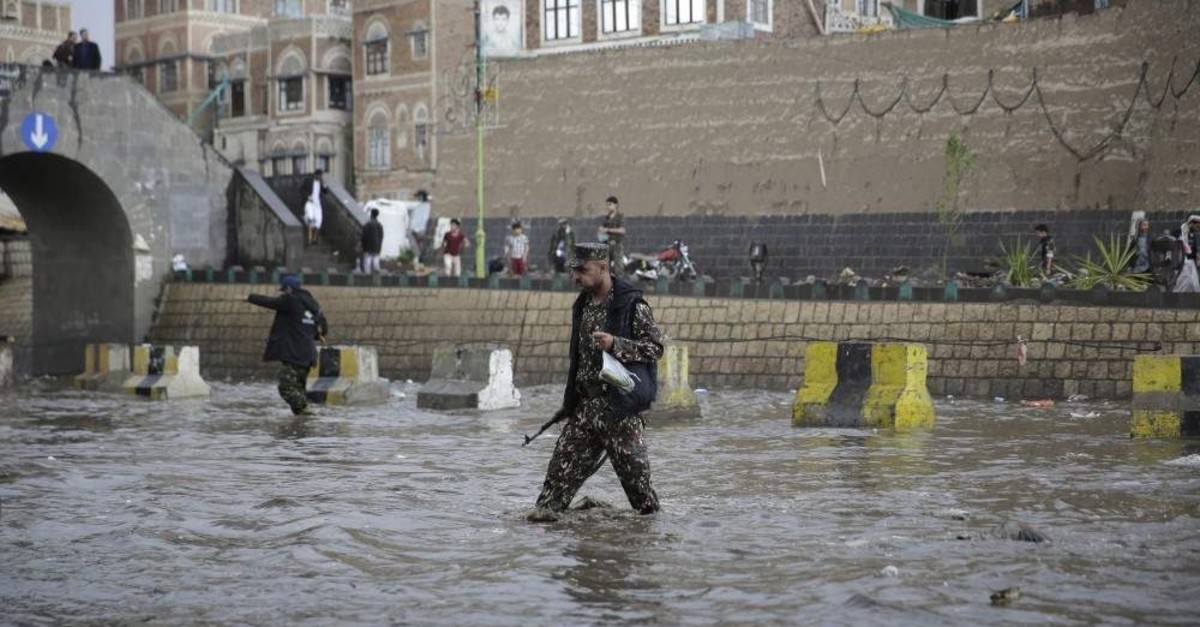 A Houthi militant guards a flooded street leading to a protest against the U.S. airstrike in Iraq that killed Iraqi militia commander Abu Mahdi al-Muhandis and Iranian Gen. Qassem Soleimani, in Sanaa, Yemen, Jan. 6, 2020. (AP Photo)
by Compiled from Wire Services Jan 28, 2020 11:27 am

A drastic escalation in fighting between the Saudi-led military coalition and Houthi rebels in Yemen has killed or wounded hundreds of people over the past week, officials and tribal leaders said Monday.

The sudden spike in violence across long-stalemated front lines threatened to exacerbate the five-year conflict and complicate indirect peace talks between Saudi Arabia and the Iran-backed rebels.

The U.N. Security Council (UNSC) called emergency consultations on the latest developments for Tuesday morning at Britain's request. Britain's U.N. ambassador, Karen Pierce, said the council will receive a closed-door video briefing from the U.N. envoy for Yemen, Martin Griffiths. The UNSC's closed-door meeting Tuesday could yield a joint statement, one of the diplomats said.

The warring factions have concentrated their forces in three main areas: Nehm, a half-hour drive from the capital; Jawf, a mountainous northern district; and Marib, a western province that saw one of the deadliest rebel attacks earlier this month. Fighting this week was the most intense those provinces had seen in three years, according to observers.

A wave of over 40 coalition airstrikes hit rebel targets, destroying many of their tanks and armored vehicles, Houthi officials said. The officials spoke on condition of anonymity in line with regulations.

Despite heavy losses on both sides, the Houthis are gaining ground, officials said. Rebels seized a key supply line linking Marib with Jawf and were approaching the capital of the northwestern province. The rebels are now just 5 kilometers (3 miles) from the city, a source said. Artillery shelling in the district killed three civilians Monday.

Throughout the day, President Abed Rabbo Mansour Hadi deliberated with military chiefs and local governors. He stressed the need to "upgrade military institutions to the highest level of training, armament and vigilance," according to a government statement. Yemeni military setbacks have drawn recent complaints that the army lacks the technically advanced weaponry propelling Houthi advances.

Fighting also flared up Monday in the large, government-controlled city of Taiz, where a mortar shell fired by Houthis struck a busy market, killing three civilians and wounding 10. Meanwhile, heavy clashes in the central province of Bayda killed 13 fighters on both sides.

In a report published Friday, the International Crisis Group said the Houthis "appeared to be making the biggest gains on the battlefield." The think tank warned that if the renewed fighting spreads, it would represent "a devastating blow to current efforts to end the war."

Yemeni Prime Minister Maeen Abdulmalik Saeed vowed that government forces would "harshly confront" Houthi militias, which he accused of trying to "prolong the war and relieve the pressure and international isolation of Iran."

The Houthi offensives signal "their explicit rejection of peace efforts," he said.

For months, back-channel negotiations in Oman between Saudi Arabia and the Houthis stirred modest hopes for reconciliation. But sharply escalating violence has put the political process on shaky ground.

Peter Salisbury, Yemen expert at the International Crisis Group, said the Houthis may be using their military successes to gain leverage before talks resume next week in Oman.

"Both sides seem to want some sort of truce," Salisbury said. "But the danger is that if the Houthis feel they're on the front foot, they'll keep pressing advances and that will make these negotiations very difficult."

Yemen, the Arab world's poorest country, has been convulsed by war since Houthi rebels seized the capital and ousted Hadi's government in 2014. The conflict set off one of the world's worst humanitarian crises, killing over 10,000 people, displacing more than 3 million and pushing the country to the brink of famine.

Potentially fatal diseases, such as cholera, spread as the country's public health and sanitation systems collapsed. Following intense international pressure on the Saudi-led coalition, the foreign ministry announced Monday that for the first time in years, Yemen would start direct flights to Egypt and Jordan for seriously ill patients seeking medical treatment.

To weaken the Houthis, the coalition imposed a blockade on the Sanaa International Airport, along with other ports in rebel-held areas. The closure has hindered the delivery of humanitarian aid and barred thousands of sick Yemenis from traveling abroad for urgent care.

"This humanitarian step aims to alleviate the suffering of citizens unable to endure the hardship of traveling by road to other airports," the ministry said of the medical flights, adding that the flights would begin next month.