Trump's plan not about peace but bolstering Israeli-Gulf alliance 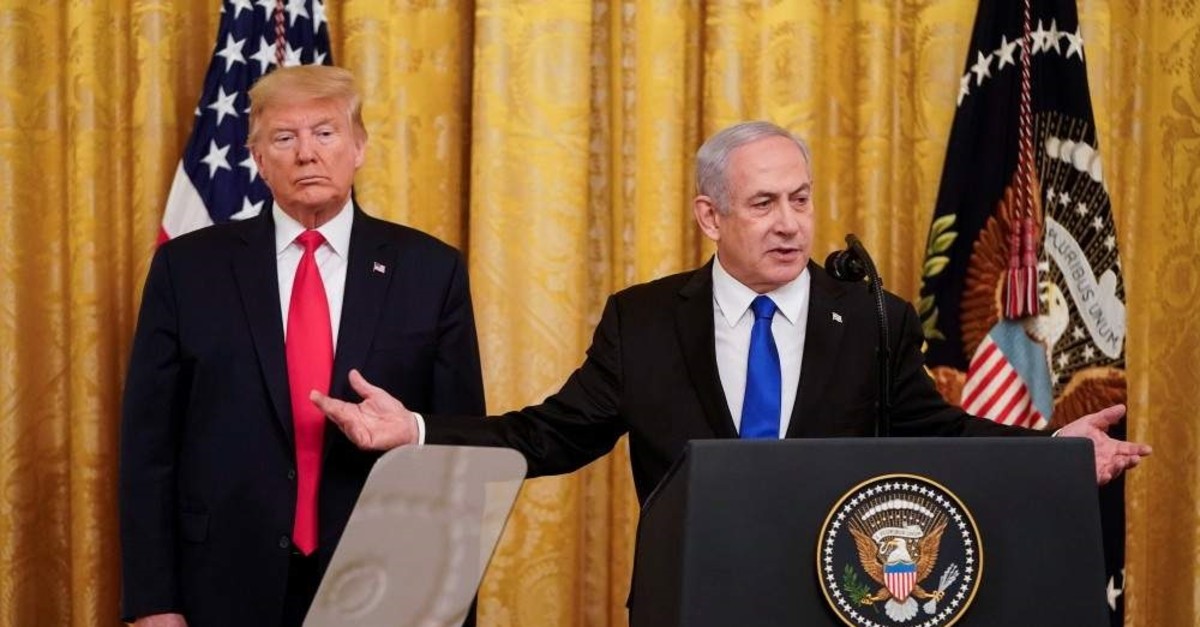 U.S. President Donald Trump and Israeli Prime Minister Benjamin Netanyahu finally shared the so-called "peace plan" with the public late Tuesday. Refusing to let the accredited Turkish journalists into the conference hall, the two leaders read the articles of the plan. Yes, it was a plan concerning the Israeli-Palestinian conflict, however, it was not a peace plan at all. Instead, it was a major step toward consolidating and materializing the U.S.-Israel-Gulf alliance. The reactions against the plan clearly reflected who the parties of the alliance are. By admitting the situation on the ground, the U.S. administration gave Israel what it wanted since the plan for the Middle East does not contain a fully independent Palestine but a stronger Israel and Gulf against Iran and other threatening elements for the U.S.

The plan includes important points about the future of Palestine and the Israeli settlements and annexations. A Palestinian state would be established eventually, according to Trump, but Netanyahu stated that its sovereignty would be limited. Moreover, Trump's son-in-law and adviser Jared Kushner said the Palestinians should have completed their preparations for becoming a state. One of the most sensitive issues was the status of Jerusalem, a city which is accepted as a holy land by the members of the three Abrahamic religions. Trump said East Jerusalem would be the capital of Palestine while Jerusalem would serve as Israel's undivided capital, noting that al-Aqsa mosque will be open to Muslims and that Israel would be responsible for ensuring freedom of religion.

For decades Jerusalem was considered the capital of a free Palestinian state, but, notwithstanding, the U.S. prefers to recognize the de facto situation. Indeed, moving the U.S. embassy to Jerusalem from Tel Aviv in 2018 was the most powerful signal that the U.S. aimed to recognize the city as Israel's capital, in spite of violating international treaties. Another important issue was the annexation of the West Bank. Although it is unclear whether these lands will be recognized as Israeli territories or whether Israeli law will be put into effect, it is obvious that the Israeli lands will be expanded. Some of the territories that previously belonged to Jordan are under Israeli occupation. However, the U.S. formally recognized Israeli sovereignty over the Golan Heights, which belong to Syria.

Predictably, each Palestinian party, including the government and Hamas, rejected the plan immediately. The Palestinian Authority challenged the legalization of the occupation and underlined that the plan would undermine the two-state solution. However, the Gulf was at the forefront to express appreciation for the plan. In fact, it was not a surprise as certain Gulf countries were mentioned favorably during the announcement of the plan. Kushner, who is the architect of the plan, was aiming to create a rapprochement between the Gulf and Israel. Last week, a Saudi imam was filmed in Auschwitz, praying for the victims of the Holocaust. His gesture was highly praised in the Israeli media. Another important development that happened in the past week was that Israel decided to allow its citizens to travel to Saudi Arabia.

Israel and the Gulf, particularly the United Arab Emirates and Saudi Arabia, consider Iran the biggest threat to themselves. Saudi Arabia believes Iran funds certain groups in Yemen as well as in Syria and Iraq, while Israel claims Iran and its proxies or supporting groups, like Hezbollah, are existential threats to its soil. They agree that Iran must be stopped, and its power must be curbed at any price. Since Trump ascended to the presidential post, his administration has concentrated on Gulf countries for the Middle East plan, as a fresh rapprochement is observed between these countries and Israel. Similar to the U.S., Netanyahu has launched an initiative to develop positive relations with Gulf countries, especially with Saudi Arabia, as Crown Prince Mohammed bin Salman is known for his soft stance toward Israel. In this regard, the so-called "peace plan" seems to be serving the redesigning of the Middle East, in which Palestine would not be a problem anymore as Israeli occupation will be officially recognized. Yet, what will be concentrated on will be the elimination of threatening elements like Iran by an alliance among Israel, U.S. and the Gulf.