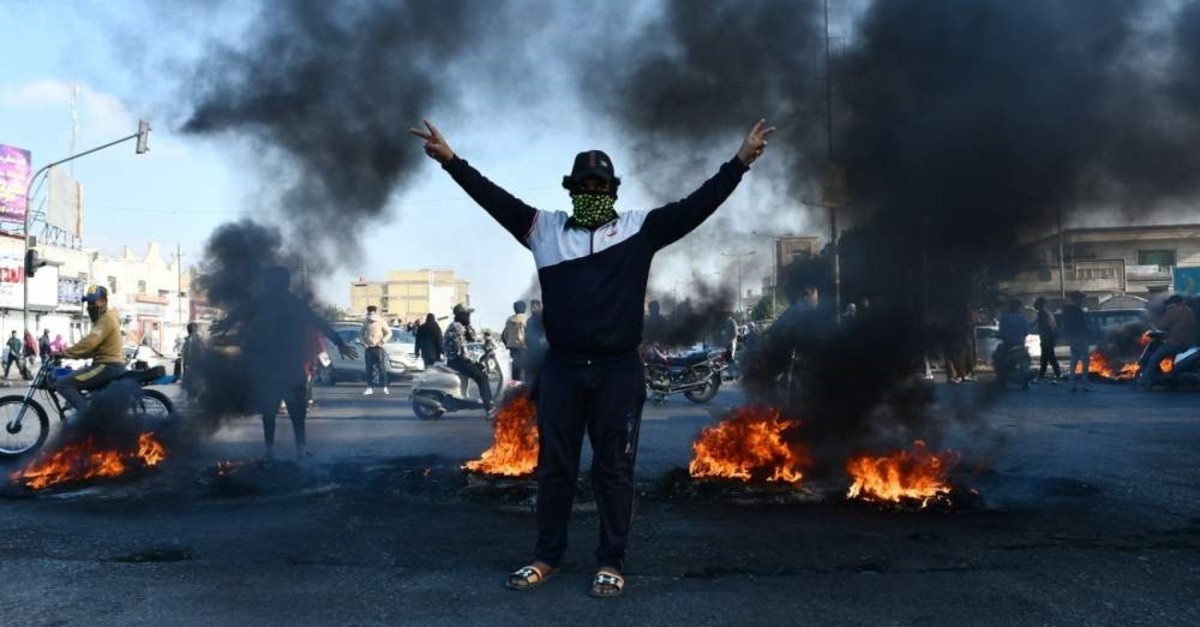 An Iraqi anti-government demonstrator gestures next to burning tyres in the southern Iraqi city of Nasiriyah, Feb. 10, 2020. (AFP Photo)
by Compiled from Wire Services Feb 10, 2020 5:20 pm

Iraqi security forces shot and killed at least one protester in the country's south on Monday, officials said as the five-month anti-government protest movement enters a critical stage.

Security forces fired live rounds to disperse crowds at the rally site near the al-Ain University in the southern city of Nasiriyah, killing a demonstrator, two medical officials said, speaking on condition of anonymity in line with regulations.

The latest death comes as the anti-government protests, which engulfed Baghdad and Iraq's south in October, are at a key point as activists are trying to maintain a critical number of people on the street and tensions continue to escalate between the demonstrators and the followers of a leading radical Iraqi Shiite cleric Muqtada al-Sadr. Nasiriyah has emerged as a frequent flashpoint of protest violence.

Tensions have been high in protest squares in recent days between youths furious at Mohammed Allawi's nomination and Sadrists. Allawi's nomination on Feb. 1 has so far failed to quell the months-long rallies sweeping Baghdad and the mainly-Shiite south, where young demonstrators have demanded nothing short of a total government overhaul. He must form a government within a month and face a confidence vote in parliament. At least eight protesters were killed in the southern city of Najaf last Wednesday when followers of al-Sadr stormed the protest site and fired live bullets.

Al-Sadr initially threw his weight behind the anti-government uprising but recently re-positioned himself toward the political establishment after political elites selected Allawi as prime minister-designate, a candidate he endorsed. Since then, al-Sadr has issued a dizzying array of contradictory calls to followers, asking them to return to the streets, days after withdrawing support from the protests. His conflicting calls have exacerbated existing tensions between anti-government demonstrators and the cleric's followers.

Anti-government protesters who took to the streets last October in Baghdad and southern Iraq to decry rampant government corruption, poor services and unemployment, have rejected Allawi's candidacy. At least 500 have died under fire from security forces in the movement, now in its fifth month. According to Amnesty International and previous statements by President Barham Saleh, more than 600 people have been killed during the protests. The commission earlier announced that more than 17,000 people have been injured.