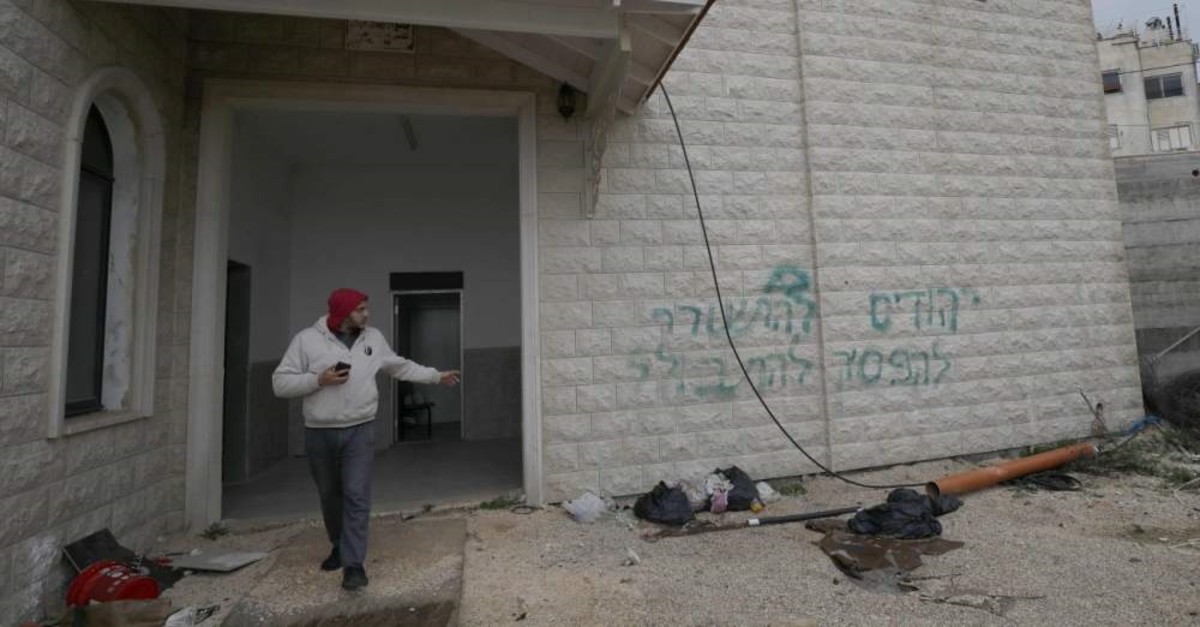 Dozens of cars in an Israeli-Arab village were vandalized overnight, police said Tuesday, with slogans sprayed on a mosque indicating the involvement of Jewish extremists. The slogans "Jews awaken" and "Stop assimilating" were scrawled on a mosque and another building in Jish, a small village in Galilee located just south of Israel's border with Lebanon.

The incident bore the hallmark of a "price tag" attack, a euphemism for Jewish nationalist-motivated hate crimes targeting Palestinians and Arab Israelis and their property. Most have been directed at Palestinians in response to militant attacks or perceived efforts by Israeli authorities to limit settlement expansion, while others have targeted Christian and Muslim sites.

Israel has seen a rise in acts of vandalism against Israeli Arabs in recent months. Last month, Israeli police launched a manhunt after an apparent arson attack on an east Jerusalem mosque accompanied by graffiti in Hebrew. In December, vandals slashed the tires of over 160 vehicles and sprayed slogans such as "Arabs = enemies" in a Palestinian neighborhood of Israeli-annexed east Jerusalem.

The head of the Arab-led Joint List, Ayman Odeh, condemned the attack and blamed the prime minister's rhetoric for stoking such hatred. "For weeks (Israeli Prime Minister Benjamin) Netanyahu is sending us one message, you're not wanted," Odeh said of Israel's Arab minority. "Today we see the results." Netanyahu has been accused of using anti-Arab rhetoric ahead of Israel's March 2 election, the country's third vote in a year.

Palestinian towns and villages on the West Bank are frequently targeted by extremist Jewish settlers. Israeli daily Haaretz reported last year that settler attacks on West Bank Palestinians had tripled in 2018, with at least 482 separate attacks recorded last year, up from 140 attacks in 2017. According to the newspaper, attacks ranged from beating up Palestinians and vandalizing their property to cutting down trees belonging to Palestinian farmers. In a rampant wave of vandalism, Jewish settlers continue to destroy Palestinian olive groves in the Israeli-occupied West Bank. More than 7,000 Palestinian-owned trees were vandalized in 2018, according to the U.N.

The attack came at a sensitive time following the release of U.S. President Donald Trump's unilateral Middle East initiative, which heavily favors Israel. Palestinians have rejected the plan, and sporadic clashes have erupted across the West Bank in recent days. Israeli forces have stepped up violence against Palestinians who took to the streets in the occupied West Bank to protest the U.S.' proposal. Thousands of Palestinians rallied Tuesday in the West Bank to reject Trump's Mideast initiative and to express support for the Palestinian leadership as it tries to gain support at the U.N. for a resolution opposing the plan.