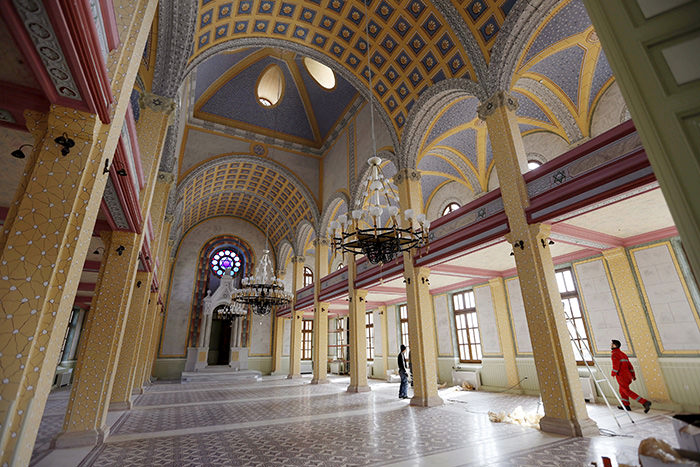 Workers put the final touches during the restoration of the Great Synagogue in Edirne, western Turkey, February 26, 2015 (Reuters Photo)
by Anadolu Agency Apr 14, 2015 12:00 am
Jews in Turkey feel "less lonely" after moves by the government to recognize the community's history and culture. So says Riva Hayim, who writes for the Turkish Jewish community weekly paper, Salom.

Last month a historical synagogue in the north-western Turkish city of Edirne was reopened with the participation of Deputy Prime Minister Bulent Arinc; the place of worship had been closed in 1969.

The Great Edirne Synagogue, the largest in Turkey and third largest in Europe, was built during the reign of Ottoman sultan, Abdulhamit II.

Hayim was among those at the synagogue's re-opening; she shared her feelings with The Anadolu Agency as well as answering questions about the Jewish community's situation and expectations.

"Opening a synagogue is not something which provides politicians with more votes, sad to say. But opening a synagogue, participating in our memorials or greeting our festivals are brave and inclusive steps," says Hayim.

Recent steps by the government towards the Jewish community in Turkey include the organization of a January 27 International Holocaust Remembrance Day ceremony plus a 2015 memorial to mark the 1942 Struma Disaster.

The commemoration marks the incident when the Struma, a vessel carrying hundreds of Jewish refugees outbound from the port of Constanza, sank after it was torpedoed by a Soviet submarine off the cost of Istanbul's Sile in the international waters of the Black Sea.

Delighted by the reopening of Great Edirne Synagogue in March, Hayim says: "Thanks to God, it seems that when some said, 'No need for such steps,' others said: 'Jews are our citizens too and they have the right to exercise their religion.'"

Hayim says when "Maftirim was performed during the ceremony [Jewish mystical music from Edirne] all the participants hugged each other, thinking of their common history and culture.

"I said to myself that my culture, my language might not disappear," she says, adding: "That day was unforgettable for all of us. I know what a mosque and church look like from outside, but learned how a synagogue looks like on that day."
Jewish community's problems

Touching upon previous Turkish governments' coercive policies, Hayim said they have had difficulties in preserving their culture and language.

"Finally somebody said: 'You also belong to this country, you are not alone; we are here'."

Making an analogy between hatred towards Jews in the world and anti-Muslim movements like PEGIDA in Europe, Hayim called for empathy among religious communities.

Hayim also said politicians and the media should behave responsibly to keep communities together and protect different colors in society.

"I believe facing the mistakes of the past, will help us bind more."
A Sephardic family's story

Although Hayim, 35, was born in Izmir, a Turkish city on the Aegean coast, her family's story of settling in Turkey has its roots in the Second World War.

"My grandfather, a student in France, escaped from the Nazis to Turkey during World War 2, thanks to the Turkish consulate which hid him.

"My grandmother was a Georgian Palestinian Jew who settled in Turkey after state of Israel was formed."

Asked about her native language, Hayim says: "Not Hebrew, but Ladino-pure Spanish, protected by the Ottomans for 500 years."