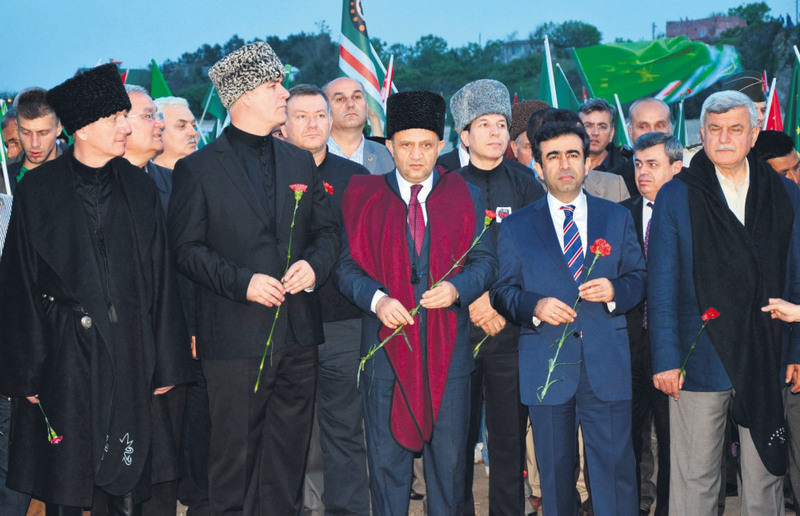 by Daily Sabah May 21, 2015 12:00 am
Descendants of the community, which were exiled after Russia defeated an army of Caucasian people in the 19th century, rallied outside the Russian consulate in Istanbul last night to protest the killings that they claim amounted to "genocide." Demonstrators gather every year for the event organized by the Federation of Circassian Associations on the occasion of the Circassian Genocide and Exile Day, to condemn the expulsion and massacres. This year's event is particularly meaningful for Circassians in Turkey due to public outrage over Russia's recognition of the Armenian "genocide," a thorny issue between Turkey and Armenia involving deaths of Armenians in Ottoman territories in the early 20th century.

Federation officials told Turkish media outlets that Russia did not compensate for the genocide by the Russian Empire against the Circassians, and called for Turkish leaders, political parties and the public to support their cause.

Foreign Ministry spokesman Tanju Bilgiç said at a press conference yesterday that the tragedy of hundreds of thousands dying during the Russian Empire's invasion of Caucasian territories deserves international recognition.

More than 500,000 people were killed in the Russian-Circassian wars between 1763 and 1864, which led to hundreds of thousands of Circassians leaving their homeland for the Caucasus. After a defeat in 1864, the Circassians - whose number was estimated to be about 1.5 million - were forced into exile to various countries. Most Circassians were herded onto ships to be transferred from the northeastern shores of the Black Sea to Ottoman territories in present-day Turkey. Thousands perished due to hunger and thirst, while many others died when their ships sank.

In a full-page ad published in national newspapers on Thursday, the Circassian community called on parliament to debate "genocide and exile" and issue an open condemnation of crimes against humanity committed by the Russians toward the Circassians. "We seek justice, not revenge," the federation-sponsored ad read.

The issue of recognizing their plight was a hotly debated topic prior to and during the Sochi 2014 Winter Olympics that coincided with the 150th year anniversary of the expulsion. The area near the Russian Black Sea resort town was one of the last strongholds of Circassian insurgent groups. Turkey hosts a large number of Circassians whose community is estimated to be composed of between 1.5 and 3 million, mainly concentrated in northern
provinces.
Last Update: May 21, 2015 9:37 pm
RELATED TOPICS