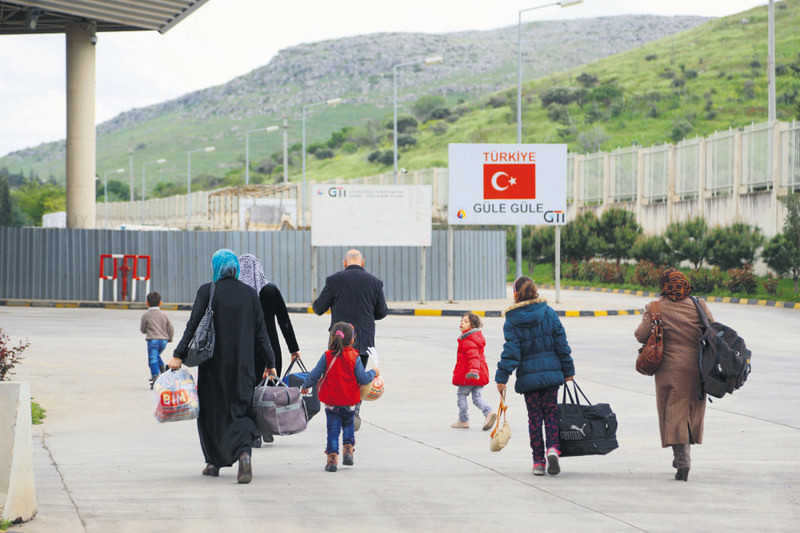 Syrians walking toward the Cilvegu00f6zu00fc border crossing to enter Syria against the backdrop of a sign reading ,goodbye, in Turkish.
by Daily Sabah with Wires May 27, 2015 12:00 am

A total of 15,000 displaced Syrians in Turkey returned home in one month after a rebel alliance captured Jisr al-Shughur, a key town in northern Syria

The taking of a town in northern Syria by rebels instilled new hope in displaced Syrians residing in Turkey. Since an alliance of rebels captured Jisr al-Shughur, a town in Idlib province, last month, 15,000 Syrians returned to their country from Reyhanlı, a Turkish town on the border.

Jisr al-Shughur is a strategically important town for regime forces battling rebels in northern Syria as it is located at the intersection of a number of big cities. It fell to rebels on April 24.

The capture was hailed by Syrians in Reyhanlı, a town in Turkey's Hatay province situated on the Turkish side of the border and home to a large population of Syrian refugees. Motivated by victory, they streamed to the border and crossed to return home. Passport holders are allowed to leave Turkey through the Cilvegözü crossing while those without passports are permitted to leave after they are registered by the Disaster and Emergency Management Authority (AFAD), which oversees the procedures related to Syrian refugees. More Syrians are expected to leave in the coming days. Ahmed Ibrahim had traveled to Turkey with four of his friends as the war intensified. "Now that rebels have captured Jisr al-Shughur, it is safe to go back," he told the Doğan News Agency. Still, it is not a mass exodus as Turkey still has over 1.8 million Syrian refugees and some 1,200 Syrians have also entered the country via Reyhanlı, although they are estimated mostly to be merchants in pursuit of business.

Since the conflict broke out in Syria, Turkey received a steady influx of displaced Syrians. About 250,000 of them live in 25 camps operated by AFAD in cities along the 915-kilometer border while others with mean, rent or buy houses and impoverished ones take shelter in parks and abandoned buildings. A growing number of Syrian refugees are trying to illegally cross into Europe from Turkey, although they often end up dead or caught while traveling by sea from Turkey's Aegean and Mediterranean coasts.

Turkey is concerned about the ongoing conflict, worsened by territorial gains of the self-proclaimed Islamic State of Iraq and al-Sham (ISIS), which hinders rebels' aim to topple the regime of Syrian President Bashar Assad. Although the country pursues an open-door policy for Syrians and the government pledged to continue embracing its Syrian "brothers and sisters," a lack of international assistance to shoulder the burden of refugees frustrates Ankara.
RELATED TOPICS