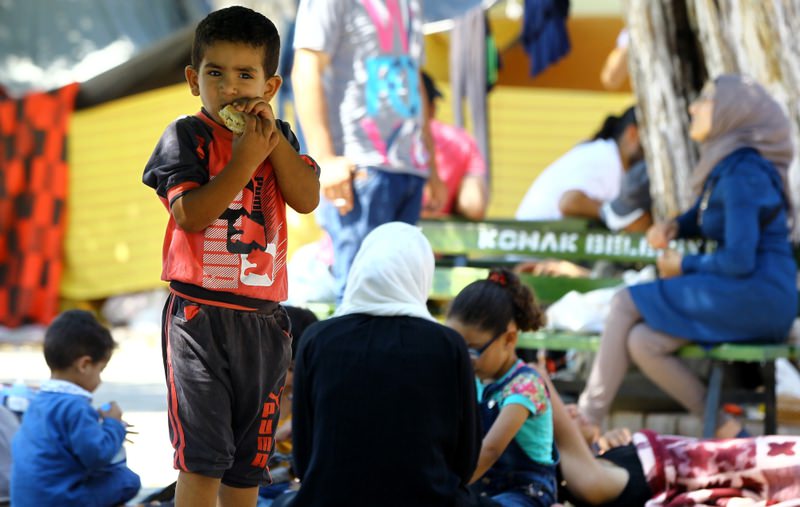 A Syrian boy who stays with his family in a park in u0130zmir's Basmane district eats a piece of bread. Poor Syrians are often forced to reside outdoors.
by Daily Sabah with AA Jul 23, 2015 12:00 am

The vicious beating a Syrian boy suffered at the hands of a local in the western city of İzmir revealed challenges displaced Syrians face.

Times are troubling for Syrians forced to flee home as the conflict in their country leaves them little choice but to take shelter in neighboring countries. Turkey is the main hub for hundreds of thousands of Syrians with its open-door policy and 25 refugee camps near the border.

But they face the grim reality that the camps can only host a small fraction of the displaced Syrians and prospects of a better life in the country struggling to cope with the financial burden of refugees seem to be dimming every day.

Thus, Syrians increasingly head to the western cities of Turkey, especially those on the coast of the Aegean Sea, the main gateway for illegal immigrants traveling to Europe.

The province of İzmir, a commercial hub on the Aegean coast and home to the eponymous city with a populace of more than four million people, has seen a visible rise in the number of Syrians as well.

With little means, they cling to life and many hope to hop on smugglers' boats to cross onto Greek islands near İzmir.

Public opinion toward Syrians is generally favorable. However, an outburst of violence targeting a young Syrian boy dampened this favorable mood. The boy around the age of 10 was photographed being beaten by the manager of a restaurant in the city's Basmane district on Tuesday. The man was reportedly angered over the boy "harassing" the customers as he was selling paper tissues to earn a living for his family. Despite the pleas of onlookers, the angry man repeatedly slapped the boy even though he fell to the ground. Photos of the young boy choking with tears with blood dripping from his nose caused outrage.

As condemnations poured in on social media over the incident, Turkish media reported that İzmir police said they found the boy, who disappeared after the incident, and the man seen beating him faced charges of inflicting violence on a minor. The man denied allegations yesterday, claiming he was intervening to stop two Syrian boys fighting.

Though his identity was not disclosed, he is likely among many Syrians forced to take shelter in parks, the courtyards of mosques and any other place where they can sleep.

Families with little money stay in squalid hotels, in small rooms crammed with up to 10 people. Others who can only afford to pay the smugglers who will take them to Europe, desperately await the next smuggler boat to nearby Greek islands. They often depart at night secretly, though a great number of trips end up with the overcrowded boats sinking.

Muhammed Salih Ali, head of a Turkey-based nongovernmental organization for Syrians, says the Aegean Sea is both hope and the grave for Syrians. Speaking to Anadolu Agency, he says Turkey must find a way "to shut down the route." Ali says Syrians in İzmir receive little help, noting they urgently need accommodation and aid.

Muhammed Berke, a Syrian who speaks Turkish and acts as a voluntary interpreter for fellow Syrians, is among those awaiting crossing into European countries. He left Istanbul where he has been living for five years for İzmir, anxiously awaiting the signal of smugglers.

Muhammad Abosh, 30, was heavily injured in an explosion in Syria. His leg was treated at a hospital in Kilis, a Turkish border city. Before he fully recovered, he traveled to İzmir with other Syrians as he does not have any means of earning a living and seeks to travel to Europe for a better life. Abdurrahman İbrahim, who stays with fellow Syrians in the courtyard of Hatuniye mosque, sums up why they plan to leave for Europe with one sentence: "There is no home, no job, no food here."

The reaction to Syrians, who are relatively new to İzmir as most Syrians preferred staying in Istanbul and other cities in the past few years, is mixed among the local population. Kudret Kaplan, an unemployed man, links his unemployment to Syrians working illegally and for low wages. "There are no jobs here. Employers prefer Syrians, not me. I don't want them here," he says.

Faik Aslan, another İzmir resident, disagrees. "They didn't take away the jobs of people here. It is more about employers who seek to boost their profits by paying less. I am proud of my country for it embraced suffering people," he says.
RELATED TOPICS