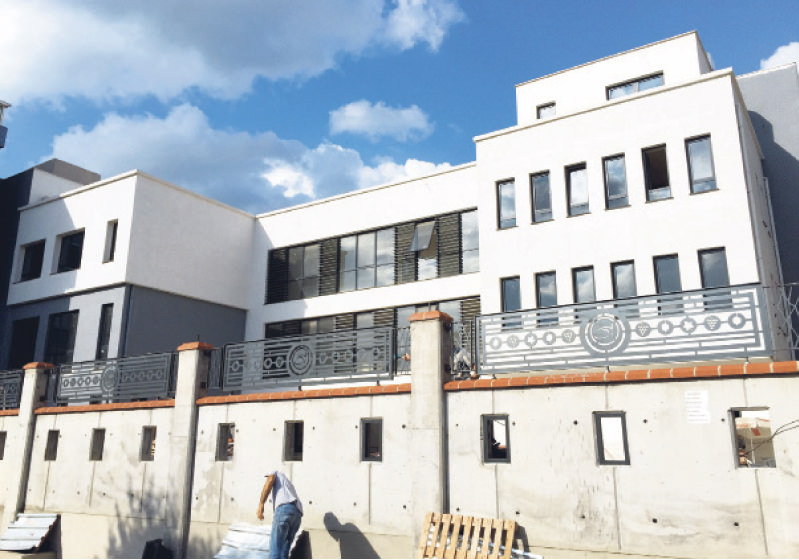 The Armenian community in Istanbul is counting down to the opening of a new school, which stands out among others in the city as the first minority school to be opened following a sweeping reform to grant more rights to the community

Mesut Özdemir has one month left to achieve his life-long dream of opening a new school for the Armenian community in Istanbul. "I am very delighted to see that the school is almost completed. Moving to a new building after 171 years makes us all happy," Özdemir, who is chairman of the Surp Asdvadzadzin Church Foundation, said.

Construction of the project began three years ago. From the outside, it is not much different from other schools, yet it is unique. It is the first school that Istanbul's Armenian community has built in Turkey within a legal framework. The community opened schools in previous decades, but they were dependent on special permission granted by prime ministers.

There are 22 minority schools In Istanbul - five of them are Greek, one is Jewish and the remaining 16 are Armenian. What made this latest project possible was a 2008 legal reform brought forward by the government and pushed through Parliament. The changes allowed minorities to acquire and renovate properties. The government also began returning previously confiscated properties to minority communities. Such changes were welcomed and supported at the local level. For instance, Bakırköy Municipality exempted the Armenian school from certain fees to smooth construction and lower costs. "Members of the local council unanimously voted for the exemption," Özdemir said.

Despite such help from the municipality, Özdemir said financing was challenging for the community. The foundation depended on several fundraising efforts to finish the job. To relieve some of the financial burden, the government added minority schools to a list of institutions eligible for state aid. In Turkey, the state partially aids students with financial difficulties so that they can enroll in private institutions. Minority schools are not categorized as private institutions, but the government included them on the list, Özdemir stressed. "We thank everyone who helped us to have this joyous moment: Ministers, mayors and the Armenian community," Özdemir said, adding that the first day of the school year, Sept. 28, will be its official inauguration day.

Minority schools are regulated by the 1923 Treaty of Lausanne, the founding document of the Turkish Republic. According to that treaty, the three recognized minority populations - Greeks, Armenians and Jews - have a right to open their own schools. The state should allocate money to them, and although the curriculum is determined by the state, the schools can offer education in Turkish and their own languages. More than 3,000 students currently attend Istanbul's 16 Armenian schools. The Bakırköy neighborhood on Istanbul's European side housed one small school that was built 170 years ago by an Armenian Ottoman official, Hovhannes Dadyan.

Over time, the Armenians in Bakırköy depended on that one school, but as their numbers increased, capacity became a problem. Now the school has to accommodate 400 children - more than enough for the old building. The new school now has more space to accommodate even more than 400 students. Özdemir said the school is now able to offer a kindergarten to the Armenian community as well, which will increase the number of students to 500.

"We now have a bigger sports and conference hall," Özdemir said, adding that parents and students toured the construction site to see what the school would be like and were excited for the upcoming school year.

New schools, bigger halls and new services not only pleased the Armenian students and their parents, but also broadened the community's expectation for the next generations. "We expect more qualified people to be a product of this environment," Özdemir said.
Last Update: Aug 29, 2015 11:07 pm
RELATED TOPICS