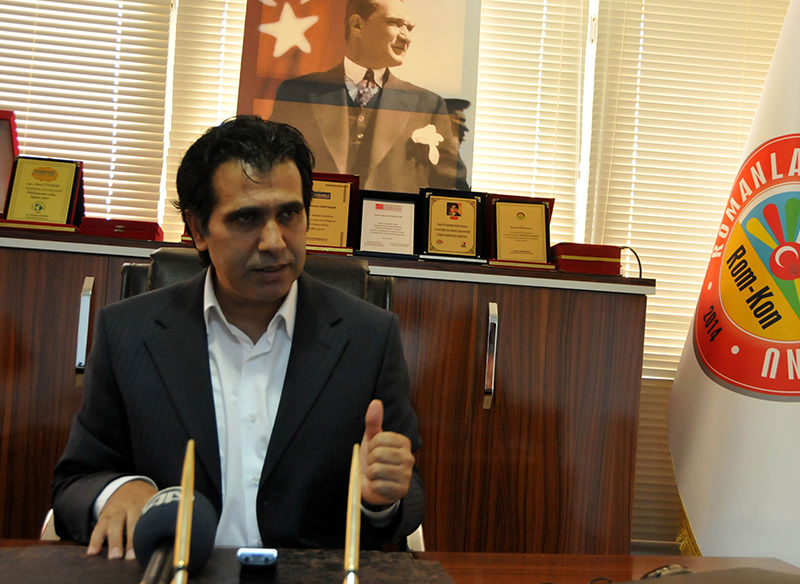 by Sinan Öztürk
Nov 05, 2015 12:00 am
TV and media have long silenced and stereotyped Turkey's Roma community; however, a new television channel seeks to give Roma a voice by broadcasting in Turkish and Roma languages.

Ahmet Çokyaşar, chairman of the Turkey Roma Confederation, told Anadolu Agency that they applied to register the television channel brand "Roman TV." Roman TV will start by putting content online for viewing and will produce shows in its studio located in Istanbul's Ümraniye district, Çokyaşar said. He added that they will start satellite broadcasts in five to six months to reach the whole world.

Çokyaşar said that Roman TV would be a very important opportunity for the Roma community to express themselves in the right way and underlined that the government's initiative to address the problems facing the Roma has improved the ethnic group's status in Turkey. Disturbed by how the media has mocked the Roma people for entertainment, Çokyaşar said that their broadcasts will include educational programs and shows raising awareness on issues important to the Roma community. "When media portrays us like this, an image comes out like 'look, even if they starve they continue to dance every day.' We want to destroy this image now and the Romani initiative gave us a chance in that regard," he said, referring to the government's new policies to resolve the problems of the Roma community, which have ranged from affirmative action in employment to social services and education opportunities for Romani children.

"In the past, there was an ostracized Roma community alienated by the law. Without the government's initiative, such associations would not have been founded; this self-confidence would not have been gained. Roman TV, which will start test broadcasts on Nov. 20, will stand against discrimination and racism in Turkey, showing that all ethnic identities are linked and follow a broadcasting policy in line with our country's national interests," Çokyaşar said.

The new channel also aims to hold donation campaigns for the education of Romani children. Noting that they will hold a donation show for the education campaign of the confederation, Çokyaşar said, "Many renowned artists are ready to appear voluntarily on our shows and support us," and the collected money will fund scholarships for Romani children.

Çokyaşar added that their broadcasts will also include televised debates and daytime programs aimed at women.

Throughout the world, the Roma are one of the most impoverished and discriminated against ethnic groups and despite their population exceeding millions in developed countries, their access to media is highly limited. Turkey is home to one of the biggest Roma communities in the world with official estimates putting the number between 500,000 and 700,000.
Last Update: Nov 05, 2015 5:26 pm