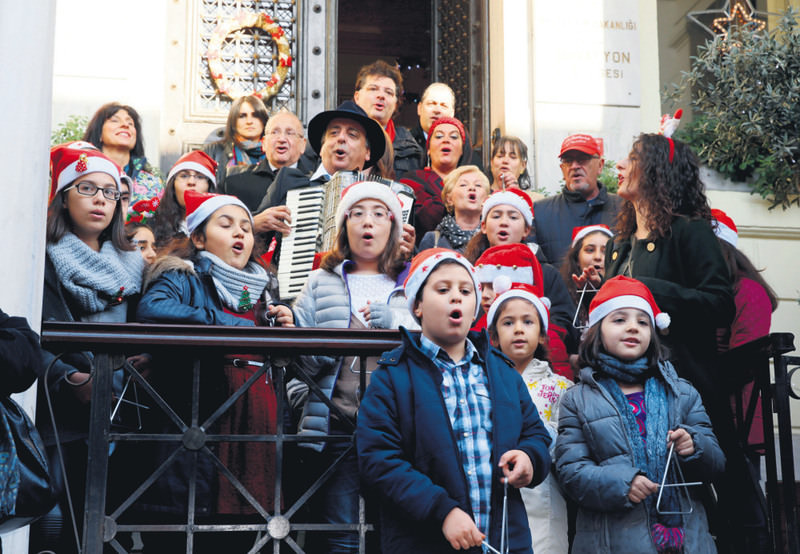 Yani Demircioğlu, the school's principal who accompanied the students playing the accordion, said it was a special day to share their joy. "Today, we mark the birthday of Jesus, just like Muslims marked the birthday of Prophet Muhammad on Tuesday. We hope days like these will further reinforce our coexistence and peace in our country. Greeks are an important part of the [ethnic] mosaic of Turkey and Istanbul," he said.

President Recep Tayyip Erdoğan said on Wednesday: "I wish the Christmas festivity that our Christian citizens of different sects and churches celebrate, in accordance with their own beliefs, to reinforce a sense of unity and solidarity."

Describing Turkey as a "region nestling different cultures and beliefs in peace and brotherhood for ages", Erdogan described Anatolia as a "basin of civilization where marginalization has found no ground".

"Being opposed to all kinds of discrimination and racism, we consider the presence of different religions and cultures as a richness, in line with the values of our civilization," he added.

The president also stressed that it is a "matter of pride" for Turkey to be a place where all citizens maintain their lives "confidently regardless of their religion, belief or ethnicity."

"I celebrate the Christmas festivity of our Christian citizens and all Christians who contribute to our social life and with whom we live in peace, brotherhood and tolerance," he said in a message issued by his press office late on Wednesday.

Davutoglu highlighted the fact that Anatolia had hosted the best examples of "co-existence culture" throughout its history, as a cradle of several civilizations.

"With the historical understanding we inherited, we-then and now-regard our citizens from different beliefs, opinions and cultures as [source of] richness for our country, and appreciate that they embellish our social life," he added.

The premier added that they wished to live in unity and solidarity with groups of different beliefs and culture - who, he said, have lived together for ages on the same soil and shared the same destiny - in the future as well.

Davutoğlu also said he hoped 2016 would bring peace and happiness to all citizens of Turkey, as well as to all humanity.
RELATED TOPICS