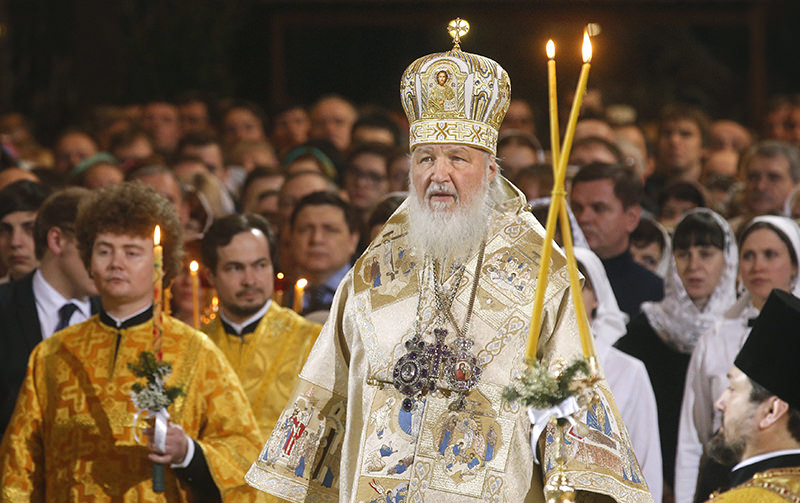 Patriarch Kirill of Moscow and All Russia reads a payer during Christmas service at Christ the Savior Cathedral in Moscow, Russia, early 07 January 2016. (EPA Photo)
by daily sabah Jan 12, 2016 12:00 am
Russian Orthodox Church Patriarch Kirill has praised Turkey's policies toward the country's non-Muslim minorities, and sent messages of peace amid tense relations between the two countries since the downing of a Russian jet for violation of Turkey's airspace.

"What is currently happening in the Muslim world has never existed before" Kirill said, and referred to the Ottoman Empire as an example. He noted that Muslims in the Ottoman Empire never massacred Christian minorities, and praised their policies.

Kirill is the Patriarch of the Moscow-based church, which oversees Orthodox churches around the world. The Russian Orthodox Church seeks to increase its influence on the Orthodox faithful according to experts, especially in line with Russia's new policy pursuing a more active role in the international community.

Two Turkish F-16 jets on patrol duty along the border were involved in the downing of the warplane and relations between the two countries have deteriorated since then.

The "democratization package" announced by the government a few years ago looks to change the state's view of minorities and restore their rights. Then-prime minister and current President Recep Tayyip Erdoğan announced in 2011 that hundreds of properties that were confiscated from minorities over the years would be returned and compensation would be paid for properties later sold to third parties. Though no comprehensive laws exist to restore the property rights, Turkish courts gradually return properties to minorities proving the ownership.

In its latest bid to restore the rights of minorities, Turkey is preparing to grant compensation to minorities, Greeks, Armenians and Jews, whose properties were seized by the state and sold to third parties in the past.