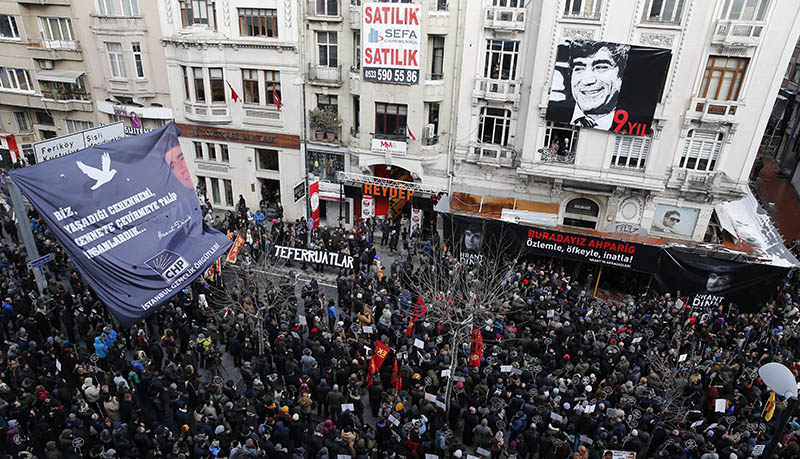 It is a sunny Monday afternoon and Yetvart Danzikyan, the editor-in-chief of Turkey's only Turkish-Armenian weekly Agos, is working in his office, surrounded by books on peace journalism and history.

Located in Istanbul's teeming Şişli district, Agos-which means a slit in the ground to sow seeds or metaphorically to bring up a culture-was founded 20 years ago on April 5.

The newspaper was set up by a group of young Armenians including Hrant Dink, who later became its editor.

Dink was later killed in front of his office by a teenage assassin in 2007.

An important figure for the Armenian community in Turkey, Dink tried to open discussion on Turkey's taboo topics and was an advocate of democratization and human rights.

Dink was repeatedly prosecuted for "denigrating Turkishness" over his articles about Armenian identity and mass deportations of Armenians in 1915.

Armenia describes these as 'genocide', a description Turkey rejects.

Today, Agos is located a couple of hundred meters away from its former site where Dink was gunned down in broad daylight.

Danzikyan, who became editor in February last year, says that although leaving their former office was difficult, staying there was also hard.

"Walking around that plaque was a heavy feeling," he says, referring to a small monument there which reads 'Hrant Dink was murdered here, January 19, 2007, at 15:05'.

Although the paper has fully moved to its new home, an apartment which doubled as Dink's office has been kept as it was. This is soon to be turned into a museum dedicated to the slain journalist, says Danzikyan whose study is decorated with a patchwork quilt embroidered with the Armenian alphabet.

Agos' new home is a three-story building, which long served as an Armenian school.

The school has had no students since the 1990s and was empty for more than 10 years, Danzikyan says.

Turkey has a long history of Armenian publications which goes back to the Ottoman Empire. Istanbul has long been home to a number of minority newspapers.

Even today the city houses perhaps the Armenian community's longest-running daily paper-Jamanak-which has been going for more than 100 years. Another daily newspaper in the Armenian language is Marmara.

There are also magazines such as Paros and Luys, as well as a publishing house called Aras mainly working on Armenian literature and culture.

Today Agos is located on the second floor of a modern building and was designed as a cultural center. It boasts a conference hall and a library under the umbrella of the Hrant Dink Foundation.

As Agos celebrates its 20th anniversary, conferences and panel discussions on Armenian matters are planned for the whole year, says Danzikyan.

The 47-year-old journalist, who was also part of the founding team of the paper, worked as a columnist for Agos since 2008. He has also worked in Turkey's mainstream media.

With 18 staff and a weekly circulation of 4,000, Agos is a small but influential newspaper, especially on minority issues in Turkey.

For Agos Tuesdays and Wednesdays are when the staff design the latest edition and its journalists stay up late to see the paper put to bed, a tradition which has continued for the last 20 years, says Danzikyan.

Revenue comes from sales, advertising and subscriptions; the Turkish government has also provided funding to Agos in the past.

The bilingual newspaper also has a fast-growing website, which publishes in Turkish and Armenian but has included English in the last two years.

Agos' readers are generally the Armenian community and other minorities in Turkey as well as people interested in the country's democratization process, Danzikyan says.

Since its foundation, the newspaper has focused on Turkish politics as well as issues for the Armenian community and other minorities such as Kurds, Greeks or Jews.

"After the assassination of Hrant Dink [we mostly] follow the [murder] case," he says.

Supporting developments intended for a solution to Kurdish issues is another focus for Agos, Danzikyan says.

"We know that when the Kurdish matter is solved, everyone in Turkey will live better," he adds.

The paper has readers in Turkey's biggest cities-Istanbul, Ankara and Izmir-as well as in the south-east but getting the publication to subscribers is one of Agos' biggest problems.

"We cannot deliver it everywhere," Danzikyan says, explaining how they struggle with delivery and trying to send some issues by post, as "delivery companies demand a lot of money and high circulation numbers".

Most of their readers outside of Turkey are in France and the U.S. as these countries are home to large Armenian communities.

Dink had a big impact on the young generation both with his life and the feelings that built after his death, Danzikyan says.

"There is this huge reality of the Hrant Dink murder in our lives; this reality has also affected Agos' life," he adds.

"Getting a fair [court] decision is very important for Agos," he says.

There are several ongoing legal cases into Dink's murder. High-profile figures were questioned as part of the investigation, including a former Istanbul vice-governor and a former police chief.

"They are speaking braver," Danzikyan says, adding he could not imagine this 20 years ago.

According to Danzikyan, there is still some prejudice against Agos:

"We always got stress every time nationalism increased [in Turkey]; some emails or offensive discourse via social media begin."

Despite the difficulties, Agos wants to be more active on the Internet and to become the voice of more and more people.

Promoting the Western Armenian language is another issue, as the dialect has been spoken less and less over the last 100 years.

"Western Armenian had been spoken in Istanbul, Syria and Lebanon," Danzikyan says, adding that because of the Syrian war, one center of the language has been already lost.

"It is not difficult to understand why [the language is not known by a younger generation] as people do not speak Western Armenian. There is no television channel or radio; they do not hear a song in the Western Armenian language."

The last 20 years have seen turbulent times for this little newspaper, but the next two decades-with ever-improving technology-could see it extend its reach.

"We think that a radio station would be good," Danzikyan adds.