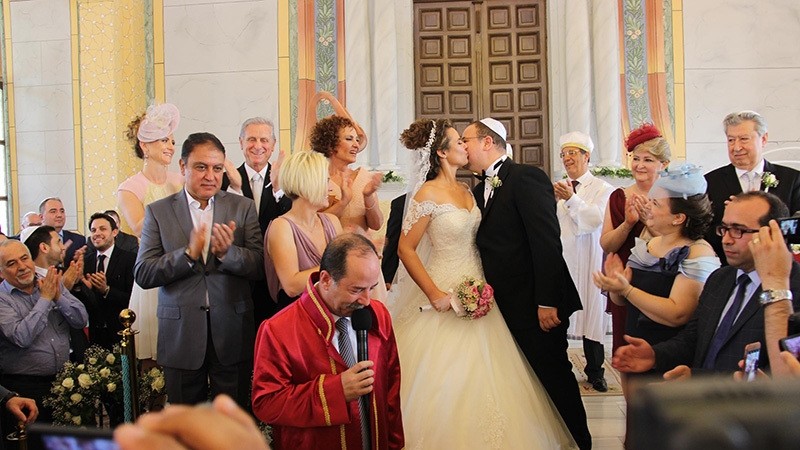 The simple wedding of a Jewish couple in a northwestern city on Sunday proved historic for the community for its location, a synagogue restored to its former glory by the state in a symbolic outreach to the country’s Jews

The Grand Synagogue of Edirne in northwestern Turkey hosted on Sunday its first wedding ceremony in more than four decades. Though it was no different than traditional Jewish weddings, it bears a symbolic importance for the community in Turkey, as it was held in a place newly renovated by the state and the first in the border city of Edirne in more than four decades.

It was a heartfelt moment for Rufat Mitrani, the patriarch of the only Jewish family living in Edirne, who married his wife Sara before the Jewish temple was abandoned to disrepair due to lack of community members. His daughter Güneş married Harun Erentürk from the Jewish community in Istanbul.

Around 1,000 guests, the majority members of the Jewish community in Istanbul and guests from other cities and abroad, filled the synagogue as "Boi Kala," a song sung to welcome the bride, rang in the exquisite temple. Two chazzans recited anoten, a traditional prayer dating back to Sephardic Jews' arrival in Istanbul after fleeing Spain in the 15th century. The prayer, an expression of gratitude to Ottoman sultans offering the community shelter, was recited in the name of Turkey's current leader, President Recep Tayyip Erdoğan.

Edirne Mayor Recep Gürkan officiated at the formal wedding, while Governor Mehmet Tekinarslan and Osman Güneren, local director of the state-run Foundations Directorate that oversaw the restoration of the synagogue, acted as witnesses. Gürkan said he was pleased to officiate "a special, unique" wedding, while Tekinarslan said he hoped the couple's descendants would also call Edirne home. Edirne's Jewish population dwindled considerably in the first half of 20th century due to anti-Semitic sentiment, forcing the community to leave the city for Istanbul and abroad.

Speaking at the ceremony, Turkish Jewish community leader İshak İbrahimzadeh said they would strive to close the 41-year gap in the synagogue's activities with events such as yesterday's wedding and thanked the Foundations Directorate for "giving the Jewish community more than a building" with the restoration of the synagogue. Mitrani's ancestors in Edirne go as far back as five centuries when the city was a key city in the Ottoman Empire and a former Ottoman capital. Mitrani got married in the synagogue, also known as Kal Kadoş ha Gadol, in the presence of roughly 100 Jews living in the city in 1975. Most of his wedding guests have left Edirne since then, but the city has seen a revival of Jewish attraction since the remarkable synagogue reopened.

The Grand Edirne Synagogue was built in 1905 upon orders from Ottoman Sultan Abdülhamid II to replace 13 separate synagogues destroyed by a fire that devastated the city. The building was designed by French architect France Depre and opened in 1907 to serve as a house of worship until 1983, by which time the city's Jewish community had dwindled to almost zero. The building was later transferred to Edirne's Trakya University to use as a cultural institution, but due to criticism, it was handed over to the General Directorate of Foundations in 1995. The synagogue's roof collapsed two years later.

Through restoration, the synagogue's lead domes and splendid interior and Torah scrolls were restored to their former glory. The synagogue features architectural characteristics of the Leopoldstadter Temple, once the largest synagogue in Vienna. Edirne is also believed to be the birthplace of the Maftirim repertoire, a type of mystic, Sephardic Jewish music.

The restoration of the synagogue was one of the ambitious projects undertaken by the government, which seeks to restore the rights of often neglected minorities in the country, to promote coexistence after decades of policies suppressing minorities' rights. Turkey's Jewish population stands at 20,000, according to unconfirmed figures. The Jewish community found a haven of tolerance in the Ottoman Empire for centuries after the conquest of Byzantine cities by the Ottomans. In particular, the community flourished after Sephardic Jews expelled from Spain during the Spanish Inquisition settled in Ottoman territory in the 15th century, and many members of the present-day community trace their ancestry to those who arrived from Spain.