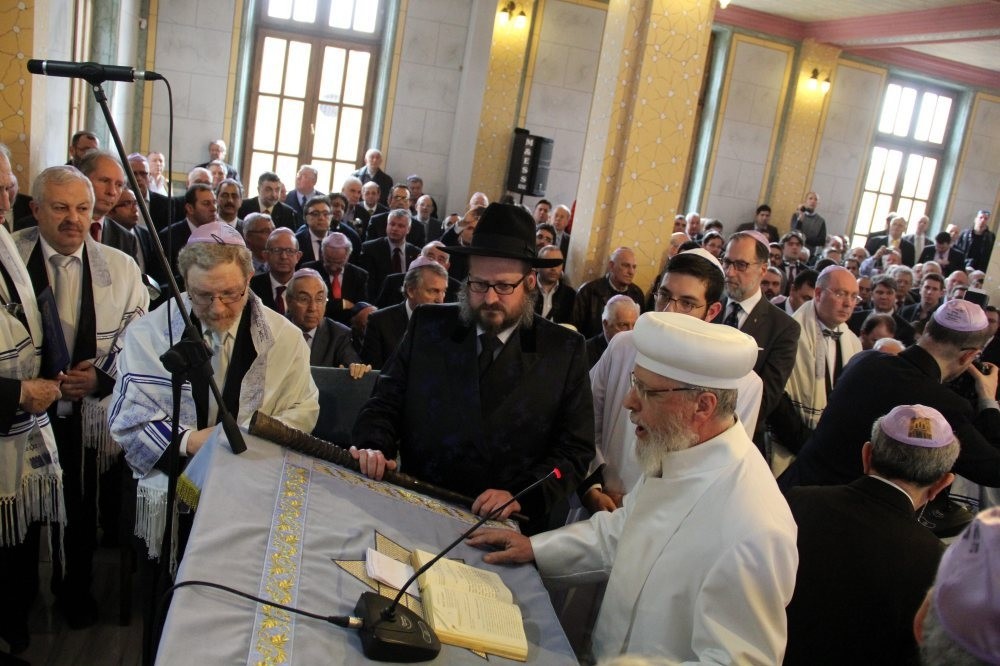 Jewish community members pray in a synagogue in Edirne. Turkey hosts a diverse population of non-Muslim communities including Armenians, Greeks and Jews.
by Yusuf Ziya Durmuş Oct 08, 2016 12:00 am

A meeting of representatives of non-Muslim communities with a minister on Wednesday might be the stage for the final step in one of the most prolonged issues for Armenian, Jewish and Greek communities: the right to exist as independent entities. Deputy Prime Minister Veysi Kaynak, in charge of government's affairs with those communities, pledged for an legal amendment that will bar state intervention into election of community leaders, handling of foundations run by communities and other significant procedures.

Non-Muslim communities in Turkey were long treated as second-class citizens in the 20th century, although they trace their origins back to the pre-Muslim conquest of Turkey. A controversial wealth tax imposed in 1942, targeting rich non-Muslims, a pogrom in 1955 and the deportation of non-Muslim Turkish citizens in 1964 added to "a fear of the state" among non-Muslim communities. However, a 1936 law that effectively stifled those communities' rights by banning their foundations from having their own independent charter, remains the most major obstacle in modern times.

Speaking to Daily Sabah, Toros Alcan, a member of Armenian community concentrated in Istanbul, said their meeting with Veysi Kaynak was the latest stage of a series of talks between the communities and government. Alcan said both parties were already working on proposals for a bill during the tenure of his predecessor in Foundations General Assembly Laki Vingas but the efforts were delayed for a string of factors, from general elections that saw multiple change of governments to the July 15 coup attempt. He said their communities had to handle their affairs with regulations and other temporary measures and were in need of a law that would grant their foundations a firm legal status. "We had problems long unresolved and the previous government led by Ahmet Davutoğlu has launched efforts for a permanent solution. We sought a wholesale, a comprehensive approach to address the problems of communities," Alcan said.

"The Foundation certificate" is a key issue for Jewish, Armenian, Greek, Assyriac communities as this document grants any foundation a firm footing in supervising their own affairs. A 1936 regulation mandated "minorities" to establish foundations via charters and included a list of the properties owned by them was followed by an unofficial ban on foundations to acquire properties other than those in the list, dealing a blow to close-knit communities dependent on revenues.

More importantly, communities were prevented from holding free elections for a long time and the election of a new board for any establishment, including churches, was subject to the state's authorization. A foundation charter was not allowed for non-Muslim groups.

The foundations are supposed to have a certificate but since 1936, they have no charters and were not allowed to hold elections, although temporary regulations allowed them to do so. Toros Alcan said every community had their own dynamics and while some had many members and few foundations to address to their social and financial needs, others had many foundations and few members. The bill is going to allow foundations to draft their own charter in terms of their needs and demographics, ensuring independence.

Alcan said the new bill, which will be presented to the prime ministry and then parliament, basically paves the way for independent charters for foundations. "It is the return of a right; a resolution of a problem. The state listened to the views of every community and the bill was drafted after these talks," Alcan said.

"This will be a revolutionary move for communities. I will be in Brussels soon as part of an initiative that will explain what happened during the coup attempt on July 15 and the state of Turkey. I will speak about this there. This is something unprecedented. We have never seen such progress (in reinstating of rights of non-Muslim groups). We suffered serious losses in terms of our rights in each decade of the past century and things worsened after 1980 coup. Nevertheless, since 2003, we witnessed an incredible change," Alcan said. He added that although the communities are small with their total population standing near to just 100,000, they were "ancient" and had a considerable diaspora.

"This new law will fill a great void for communities. In a sense, it is the end of an era. Now, instead of focusing on survival, communities will focus on how to shape their future," Alcan says.
RELATED TOPICS