New patriarch for Armenians after row over election settled 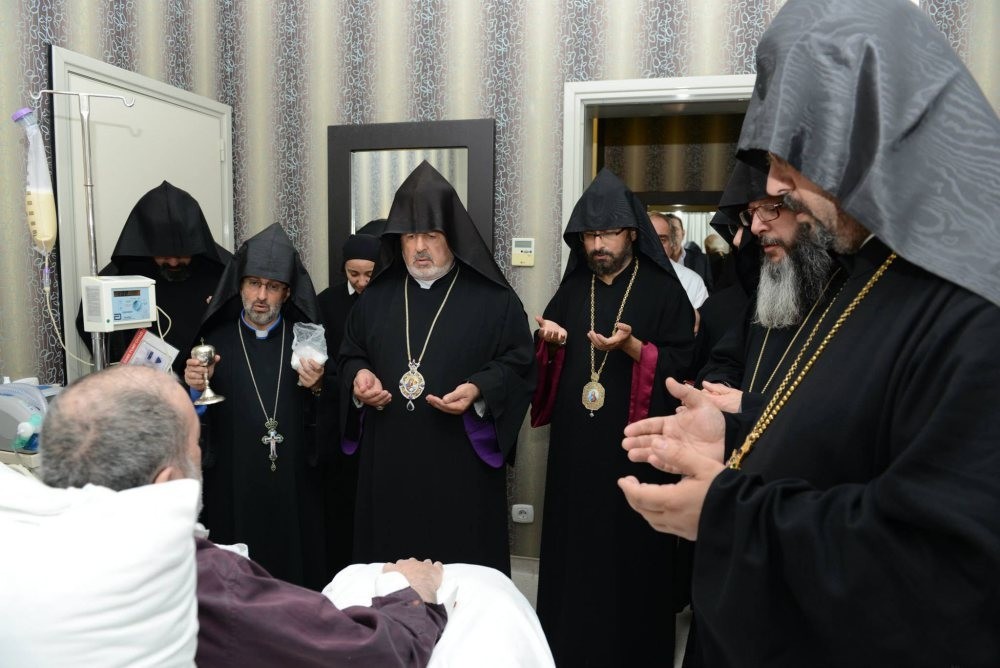 Bishops gather around Patriarch Mesrob II at his hospital room. Mesrob II has been in a vegetative state since 2008.
by Yusuf Ziya Durmuş Nov 02, 2016 12:00 am

Turkey's Armenian community is set to elect a new patriarch years after Patriarch Mesrob II lapsed into a coma, ending the deadlock in the community thriving on the reinstatement of oft-neglected rights

The General Assembly of Armenian patriarchate based in Istanbul finally "retired" Patriarch Mesrob II who has been in a vegetative state after falling ill in 2008. The move, which comes after repeated calls from several community members, was hailed for ending the deadlock for the community mostly concentrated in Istanbul and comes at a time of relatively better treatment of the community with the reinstatement of their long-neglected rights.

At a meeting in the last week of October, the assembly ruled that Mesrob II cannot function as patriarch and ancient laws and tradition of the church necessitate the annulment of the vows of religious leaders if they "disappear" for seven years. The assembly members said in their written statement that Patriarch Mesrob II will be "put into retirement" and declared him "patriarch emeritus." "The assembly decided to appeal to authorities for the election of a new patriarch," the statement said, in reference to the requirement of authorization by the state to elect a new patriarch.

A patriarchal election is required to be held by the synod of bishops, and the synod has to apply to the Interior Ministry after approving the election.

Speaking to Daily Sabah, Markar Esayan, a Turkish Armenian lawmaker for the ruling Justice and Development Party (AK Party), said the assembly's verdict was "the right decision," adding that Mesrob II's illness led to a case of uncertainty in the Armenian community and his succession has long been an unresolved matter. "It posed a problem for people, especially in terms of not having an elected patriarch," he said, pointing to the democratic structure of the Armenian patriarchate, a rarity in the world.

Esayan said the church assembly needed official confirmation on the state of Mesrob II and a report by the Forensics Institute, - the official state body that decides on the health status of individuals to see if they are eligible to hold posts like the patriarchate - helped the assembly to take the decision. He said the assembly's decision was merely "stating the obvious" as an election was what the community expected. He said the rest would be basically a red tape procedure referring to the authorization by Interior Ministry officials, highlighting that seeking permission from the state was rather an affair of security. Esayan said he expected three people to run for the office of patriarch. The community will first elect delegates who in turn, will pick a candidate for the post.

Like other non-Muslim communities whose population dwindled over the years due to a lack of rights and oppressive state policies in the past, the Armenian community saw a reinstatement of their rights such as the return of properties once seized by the state. However, the election of a new patriarch remained a thorn in the side of the community. Patriarch Mesrob II, diagnosed with dementia, was replaced by acting patriarch Aram Ateşyan but the post was the source of discontent with dissidents within the community who called for a new election. Armenian groups even staged a rare protest for the elections this summer to protest the "made-up title of acting patriarch" and electing a new religious leader. Although its members are not exclusively religious, the post of the patriarch is highly symbolic for Armenians as a uniting figure viewed as representative of the community.

The Armenian patriarchate was established in Istanbul after the city's conquest by the Ottoman Empire, and oversees Armenian churches throughout the country.
Last Update: Nov 02, 2016 9:09 am
RELATED TOPICS