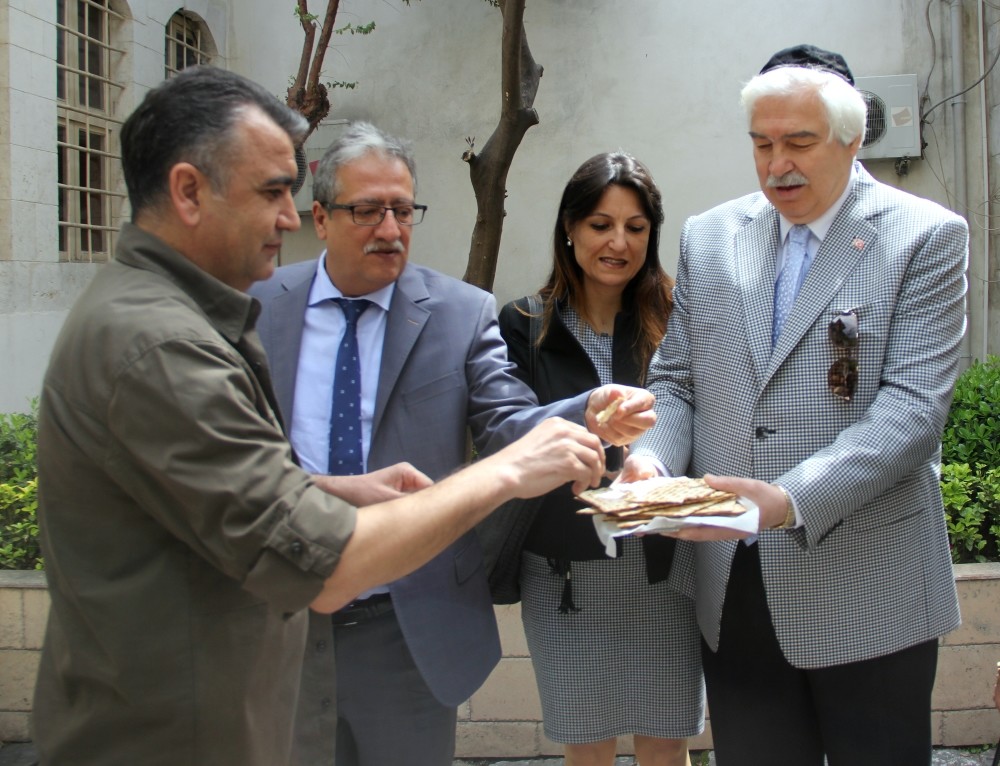 Local Jews served unleavened bread to guests at an event to mark Passover in the southern city of Hatay.
by Compiled from Wire Services Apr 12, 2017 12:00 am

The Jewish community began its Passover celebrations Tuesday. An event was held at a synagogue in the southern city of Hatay, which hosts a community that can trace its roots back to more than 2,000 years ago, while Sephardic Jews in Istanbul will host a multi-faith event on April 19

The weeklong celebration for Passover, which marks the emancipation of Jews from slavery in ancient Egypt, started in Turkey where a small Jewish minority lives.

In Hatay, a southern city known for its diverse population of various faiths from Muslims to Christians, a Jewish community who trace back their ancestors to 2,000 years ago hosted local Muslims on Tuesday for the festival. In Istanbul, the country's most populated city that also hosts the largest Jewish community mostly descending from Sephardic Jews settled in the 15th century Ottoman Empire, an event open to all faiths will be held on April 19 for Passover.

The Hatay governor, lawmakers and people of other faiths visited the synagogue where they were served unleavened bread symbolizing the Jewish festival. Governor Erdal Ata said the city, which is located on the border with Syria, has hosted multiple civilizations and faiths for centuries and was exemplary for the coexistence of a diverse array of faiths and ethnicities. "Celebrating this festival together is probably the best message for our society. I hope this sense of brotherhood and coexistence that prevailed for centuries will continue," he said. Şaul Cenudioğlu, head of the Jewish Community Foundation in Hatay, informed visitors about the importance of Passover remembering how Jews, under the leadership of Moses, fled to their liberty from the oppression of the Egyptian Pharaoh.

Hatay's Jewish community, though lesser in numbers compared to Jews in other cities, counts itself among the oldest in the country and descendants of those who left Egypt during the emancipation for present-day Iraq, before settling in Anatolia.

Passover or pesah, is observed by avoiding the consumption of leavened bread in respect to Jews, who were in such a hurry during the escape to liberty commonly known as Exodus that they were unable to bake their daily bread properly, hence, they ate unleavened bread. Seder meals from traditional Jewish cuisine served throughout Passover are another highlight of the festival. The faithful eat unleavened bread, bitter herbs, drink wine or grape juice and recite a liturgy during the rituals throughout the week.

The Quincentennial Foundation Museum in Istanbul, operated by the Jewish community, will offer seder menu to guests in an April 19 event. The event, which will be held in the museum for the first time, will provide the guests from other faiths an insight into Jewish traditions and rituals. The guests will be able to sample foods associated both with the tragedy and triumph of Jews in the face of challenges, from salty water and wine symbolizing blood, sweat and tears, as well as haroset or charoset, a sweet paste made of apple, cinnamon and date symbolizing liberation. The museum's name refers to the first arrival of Sephardic Jews to Turkey, or rather specifically Istanbul, after they fled Spain and were invited to the Ottoman Empire by then ruler Bayezid II. The city today hosts the majority of Jews in Turkey whose number is about 23,000 according to unofficial figures.

President Recep Tayyip Erdoğan issued a message on the occasion of Passover yesterday. He said the celebration of the festival was an indication that Turkish citizens can freely observe their own religious or cultural traditions. "The Turkish Jewish community has been an inseparable part of our society for centuries and greatly contributed in both social and economic life. I congratulate their Passover and wish peace to our Jewish citizens," he said in his message.
RELATED TOPICS