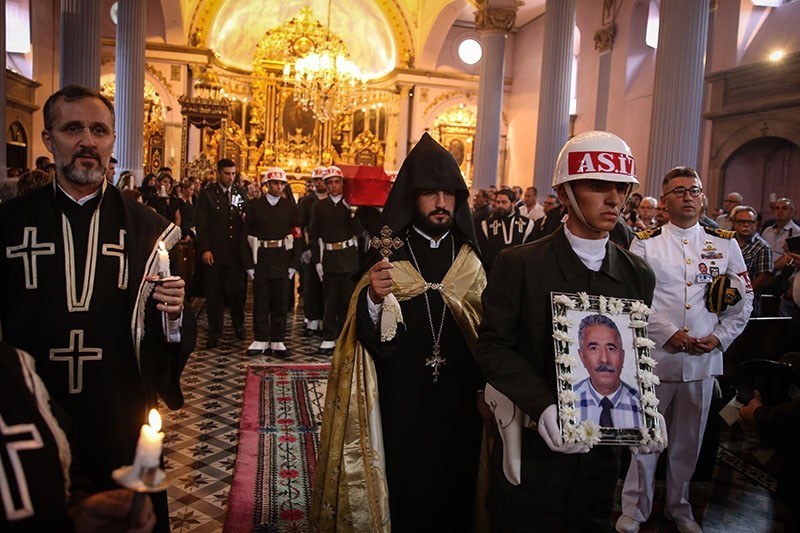 A funeral ceremony was held in Istanbul's Meryem Ana (Virgin Mary) Armenian Church Tuesday for a veteran of Armenian descent who fought in the ranks of the Turkish Armed Forces during the 1974 operation in Cyprus.

For the ceremony, members of the War Veterans Association of Turkey and Istanbul Garrison Commander Brigadier Gen. Sadettin Alp Ergin joined the family of veteran Murat Mihran İşler, who passed away at the age of 64.

Soldiers in ceremonial attire brought İşler's coffin draped with a Turkish flag to the church, and stood guard until the religious ceremony started. War veterans also saluted the coffin, some of which recited Islamic prayers for the veteran.

Reverend Mağakya Beskisizyan, who led the ceremony mastered by Archbishop Karekin Bekçiyan, said that İşler, who was living in Istanbul since 1979, was an acclaimed jeweler and a renowned figure among the Armenian community and Istanbul's landmark Grand Bazaar, where his shop is located. İşler was also the uncle of Norayr İşler, the chairman of the Istanbul Chamber of Jewelry, which traditionally has many members from the Armenian community famous for its skills in jewelry and handcrafts.

Beskisizyan said that although they are saddened by İşler's death, they knew that veterans were the honor of the nation and they carry its pride.

Following the ceremony, İşler's body was transferred to the Balıklı Armenian Cemetery to be interred.

İşler was the second Cyprus war veteran who was bidden a farewell to in a ceremony on Tuesday, since many citizens and local officials also bid farewell to 77-year-old Abdulhamit Canol in the central province of Sivas.

Turkey launched the Cyprus Peace Operation on July 20, 1974 as a guarantor power after a right-wing military coup backed by the junta in Greece toppled the internationally-recognized government and sought to unite the island with Greece, after decades of inter-communal violence between Turkish Cypriots and Greek Cypriots.

During the operation, 498 Turkish soldiers were killed and some 1,200 others injured, in addition to dozens of casualties of Turkish Cypriots resistance fighters.
Last Update: Aug 22, 2017 7:12 pm
RELATED TOPICS