Turkey to give citizenship to 23,000 Ahıska Turks 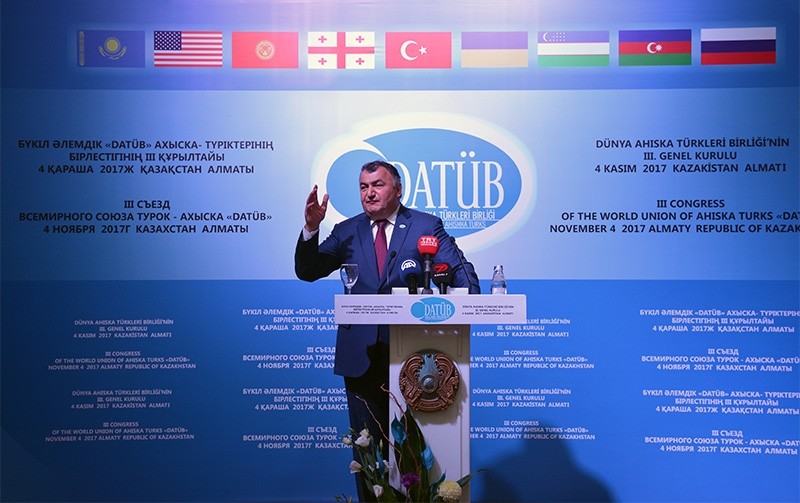 Ziyatdin Kassanov, chairman of the World Union of Ahiska Turks (DATu00dcB), speaks at the 3rd congress of the union in Kazakhstan's Almaty. (AA Photo)
by Daily Sabah with AA
Nov 05, 2017 12:00 am

Turkey will grant citizenship to 23,000 more Ahıska Turks, an ethnic group forced to migrate from the Caucasus during the Soviet era, a top representative of the Ahıska Turks said Sunday.

Ziyatdin Kassanov praised Turkey's efforts for Ahıska Turks, and said that Ahıska Turks are very happy, speaking to Turkey's state-owned Anadolu Agency on the sidelines of the third World Union of Ahıska Turks (DATÜB) meeting in the Kazakh city Almaty.

Kassanov said that more than 23,000 Ahıska Turks who migrated to Turkey and have been living there for over a decade were unable to get citizenship and work permits so far, but said that they would now be granted citizenship.

The process of delivering ID cards started with the order of President Recep Tayyip Erdoğan, a cabinet decision and directives from the Interior Ministry last month, he said.

They also faced discrimination and human rights abuses before and after the Soviet deportation. Those who migrated to Ukraine in 1990 settled in shantytowns used by seasonal workers.

The majority of Ahıska Turks in Ukraine fled their homes during the 2014 conflict between Ukrainian forces and pro-Russian separatists in eastern Ukraine.

Turkey has voluntarily accepted thousands of Ahıska Turks and granted citizenship to 585 of those so far.