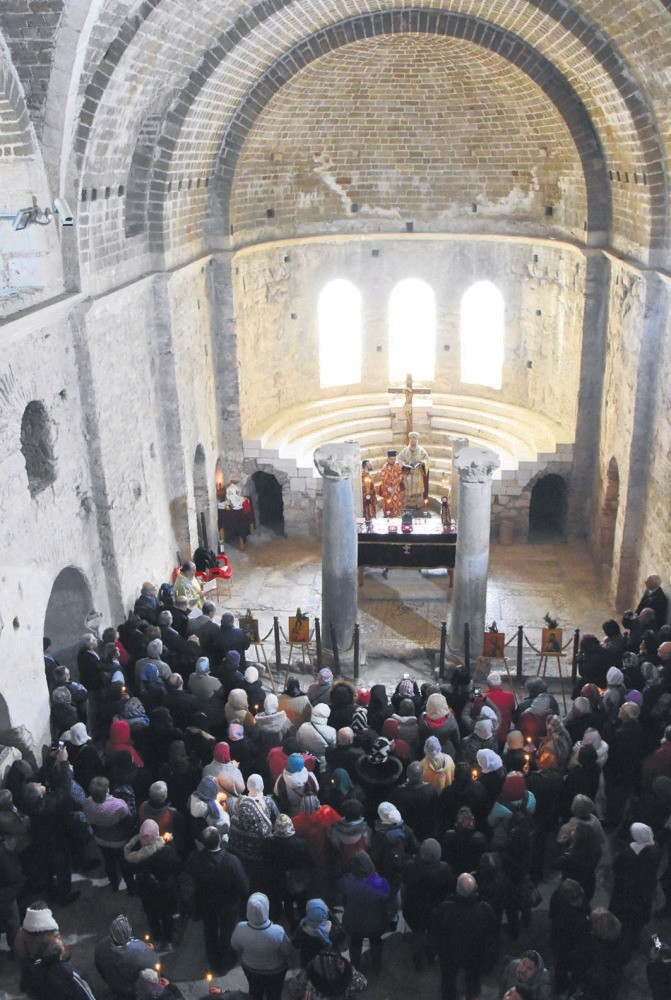 Hundreds from Turkey and Greece attended the Divine Liturgy in the ancient church.
by Dec 07, 2017 12:00 am

Orthodox Christian faithful held a religious service Wednesday in Demre, the hometown, known then as Myra, of St. Nicholas, the Christian saint who inspired Santa Claus, on the anniversary of his 1,674 years ago.

A priest from Fener Greek Orthodox Patriarchate based in Istanbul presided over the religious ceremony for the patron saint of children, sailors and the falsely accused at the St. Nicholas Museum, an ancient church where he is believed to be buried.

Along with the faithful from other cities and Greece, Demre's mayor and dignitaries attended the Divine Liturgy. Priest Hristomos Kalaycı said after the Divine Liturgy that they had an opportunity to "walk the courtyard St. Nicholas once walked and hold a Divine Liturgy where he once took the pulpit." Kalaycı also spoke about the recent reports that researchers had discovered the grave of the saint under the church. "It doesn't matter whether his remains are here or not. It is a globally accepted fact that he lived here as Bishop of Myra. We have held Divine Liturgies here every year since 1994, and what matters for us is having the saint's blessing," he said.

The saint, praised for his generosity, especially toward children, is venerated by all Christian denominations and it was this generosity that led to an evolution of his image into modern-day Santa Claus. Originally the scion of a wealthy family in Patara, a city on the southwest coast of the Byzantine Empire, Nicholas, who is believed to have been born on March 15, 270 A.D., in Lycia, joined the Church at a young age and became the bishop of Myra. Legend has it that Nicholas used to climb on the roof of people's houses and drop coins down their chimney secretly before his identity was revealed by the public. Following his death on Dec. 6, 343, the date became associated with his feast day, and when Dec. 25 was declared to be Jesus's birthday, the two occasions merged.