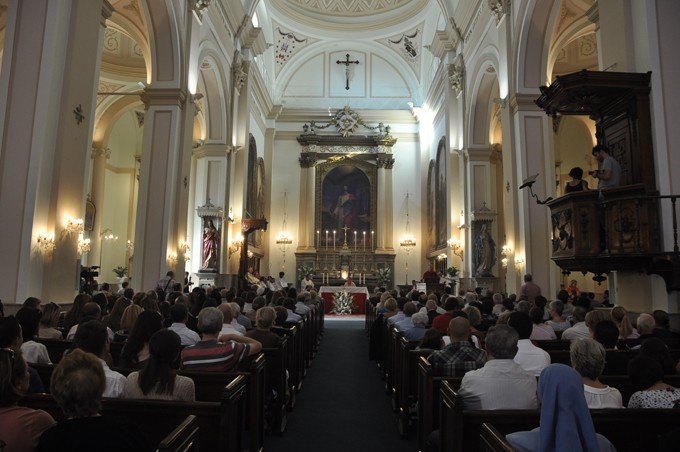 Two prominent patriarchs of Orthodox Christianity will join the faithful from Turkey and abroad on Tuesday in remembrance of John, one of Jesus Christ's 12 apostles. A liturgy will be held at the St. John Basilica in Selçuk, the modern-day Turkish town where the saint is believed to have been buried after his death around A.D. 100. Fener Greek Orthodox Patriarch Bartholomew I, whose patriarchate is based in Istanbul, will join the religious service set to be presided over by Theodore II, Orthodox Patriarch of Alexandria in Egypt.

Bartholomew I is the spiritual leader for millions of Orthodox Christians around the world while Theodore II is the religious leader for a number of Orthodox churches in Africa, from Egypt to South Africa.

Feast Day for St. John is more than a religious event and opens its doors to people of other faiths as well as cultural events on the side. The "Migrating Birds" concert that was held yesterday night was one of them.

The Istanbul Zoğrafyon Greek High School choir and "Domestiki" chorus from Greece's Drama performed Turkish and Greek songs at the concert in İzmir Sanat culture center. Yorgo Teodoridis, head of a small Greek Orthodox community in İzmir and chairman of İzmir Greek Culture and Thought Association, which organized the event, said they were excited with the patriarchs' visit.

"Cultural activities are important bridges between peoples. Turkey is a hub for faith tourism and religious services as well as related cultural activities. We have religious freedoms here and it is our task to show the world how good our country is in this context. Greeks are among the ancient people of Anatolia and are messengers of peace and friendship for our country," Teodoridis told Doğan News Agency.

St. John Basilica, where the religious service will be held, was built by Emperor Justinian in the sixth century. It is located near Ephesus, an important destination for Christians.

Every year, a large number of tourists from around the world visit Ephesus to see the church, which is second most-visited place in its immediate region after the ruins of Ephesus.

İzmir has recently seen a revival of the Greek Orthodox community with renovation and reopening of churches after being in a state of disrepair for years. The city had a significant Greek population before a population exchange in the 1920s between Turkey and Greece that saw the majority of the community leave.