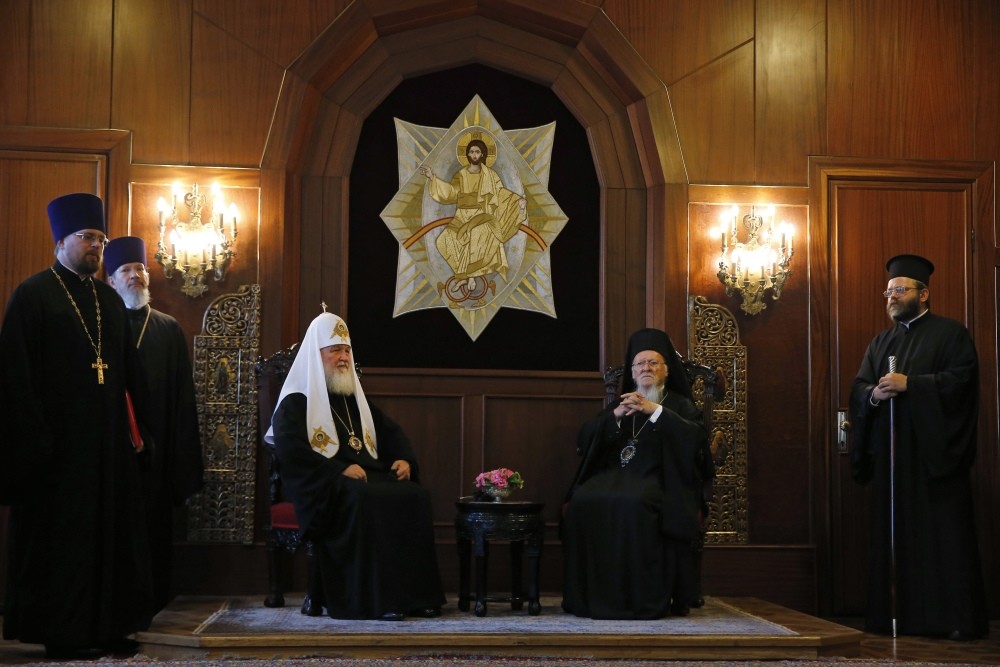 Two influential leaders of the Orthodox world met in Istanbul Friday as they looked to resolve a rift between churches against the backdrop of an ongoing dispute between Ukraine and Russia.

The heads of Fener Greek Orthodox Patriarchate and the Moscow Patriarchate discussed how to move forward on the matter of separation of Ukraine's Orthodox Church from the Russia-based patriarchate, a move strictly opposed by Moscow.

Fener Greek Orthodox Patriarch Bartholomew, whose patriarchate is based in Istanbul, oversees a large number of Orthodox churches around the world. He received Russia's Patriarch Kirill, leader of Orthodox Christian community of Russia.

Inside the humble compound of the patriarchate tucked on a quiet street near Istanbul's Golden Horn, the two church leaders exchanged smiles and handshakes in front of cameras before a private meeting. It is not the first meeting of two clergymen but the Ukrainian faithful hoped it to be the last to resolve the long-standing issue of the status of Ukrainian churches.

Ukrainian Orthodox Church seeks autocephaly or an autonomy for Orthodox churches, to be granted by the Fener Greek Orthodox Patriarchate but for Russian church, it will be "a catastrophe of pan-Orthodox scale" to "tear the church away from the Moscow Patriarchate" as Kirill stated a month prior to his Istanbul visit. The two patriarchs did not comment after their three-hour meeting. Speaking to the Demirören News Agency, Metropolitan Emmanuel of France, who was also present at the meeting, said they discussed "general situation of the Orthodox churches around the world." "We discussed all the Orthodox churches to find a solution for the Ukraine issue and we always call for dialogue. Churches in Ukraine split but we want them to be united again," Emmanuel said as he described the meeting with Kirill as "fruitful."

Patriarch Bartholomew holds the exclusive right to grant autocephaly, a full ecclesiastic independence, to Ukrainian church but he is expected to announce his patriarchate's final decision on the matter next month. If he goes ahead with granting "Tomos of Autocephaly" as it is formally known, the move will likely hurt the clout of the Moscow-based patriarchate in the Orthodox world.

The patriarchate, in its self-appointed ecumenical status, has been based in Istanbul since the time of the Byzantine Empire that collapsed after the Ottoman conquest of Constantinople. It has direct authority to assign and dismiss prelates in churches in several countries, from New Zealand to Panama. The patriarchate has a small congregation in Istanbul but many of its followers live abroad, mainly in the U.S.