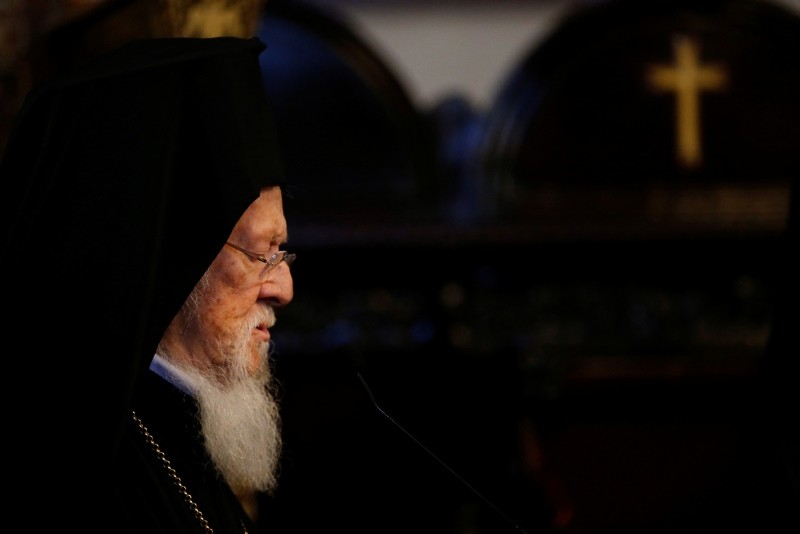 Ecumenical Patriarch Bartholomew I, the spiritual leader of the world's Orthodox Christians, talks to pilgrims at the Patriarchal Church of St. George, following Sunday Mass in Istanbul, Sunday, Oct. 7, 2018. (AP Photo)
by Daily Sabah with AFP Oct 11, 2018 12:00 am

Fener Greek Orthodox Patriarchate has granted the Ukrainian Orthodox Church autocephaly, the patriarchate said in a statement after a meeting late Thursday.

With this decision, the Ukrainian church will be ecclesiastically independent.

Russia strongly warned against the move, with the powerful head of the Russian Orthodox Church Patriarch Kirill traveling to Istanbul earlier this year in a bid to dissuade the patriarchate from taking the step.

The issue is set to play a key role in Ukraine's March 2019 presidential elections, with incumbent President Petro Poroshenko making independence from the Russian Orthodox Church -- known as autocephaly -- a key issue as he plans a re-election bid.

"This is a victory of good over evil, light over darkness," he said in televised remarks, adding that Ukraine has been waiting for this "historic event" for more than 330 years.

An Istanbul synod meeting chaired by Patriarch Bartholomew, seen as the first among equals of Orthodox Church leaders, "decreed to proceed to the granting of autocephaly to the Church of Ukraine," said an official statement read in Istanbul, formerly Constantinople.

In another key move, the synod also agreed to reinstate the head of the Ukrainian Orthodox Church Patriarch Filaret and Kiev Metropolitan Makariy to their canonical ranks following their excommunication in the dispute with Moscow.

"Thus, the above-mentioned have been canonically reinstated to their hierarchical or priestly rank," said the statement after a meeting that began on Tuesday.

The Patriarchate of Moscow, which is strongly backed by the Kremlin, argues it technically oversees most of Ukraine's Orthodox parishes and has warned that independence would provoke a rift in global Orthodoxy.

The Ukrainian Church is currently split into three bodies, one technically overseen by the Patriarch of Moscow, a fact the Kiev government considers unacceptable given its ongoing war with Russia-backed rebels in the east.

Ukraine's Orthodox church split from Moscow in the 1990s, with the charismatic Filaret a foremost proponent of a new independent Ukrainian Orthodox Church.

The Moscow Patriarchate has already cut ties with Constantinople over the affair, which it considers an unjust encroachment on its spiritual territory.

On Wednesday, an influential Moscow Patriarch cleric went so far as to warn that parishioners will not hand over churches to a new Orthodox institution willingly.

"Of course, people will take to streets and protect their sacred sites," Hilarion, a bishop in charge of diplomacy at the patriarchate, was quoted by Russian agencies as saying at a religious congress in Kazakhstan.

Ukraine and Russia have been at loggerheads since 2014 when Kiev street protests urging Ukrainian integration with Europe prompted the ousting of pro-Moscow president Viktor Yanukovych.

Russia annexed the Ukrainian peninsula of Crimea later that year and backed rebels who carved out two unrecognized breakaway regions in Ukraine's mineral-rich east in a conflict that continues to this day.

Ukrainian authorities and many worshippers are wary of the influence of Kirill, who has supported the annexation of Crimea from Ukraine and the separatists in the east of the country.