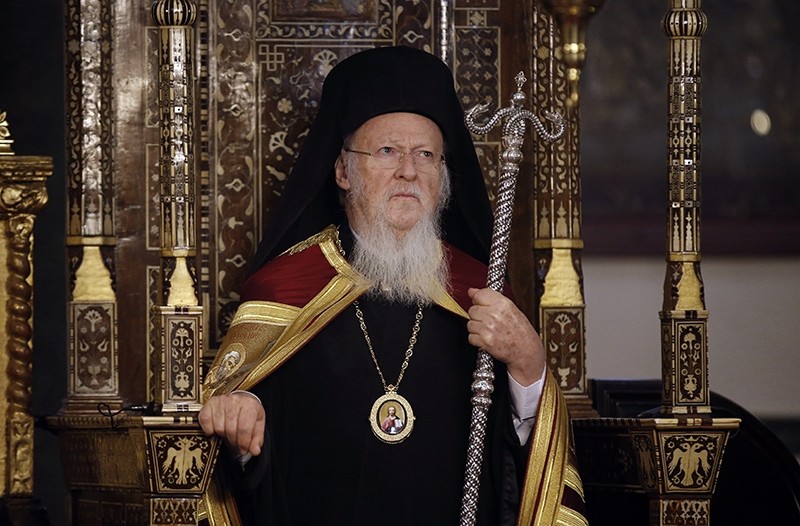 In this Wednesday, Jan. 6, 2016 file photo, Patriarch Bartholomew I, the spiritual leader of the world's Orthodox Christians, listens during an Epiphany ceremony at the Patriarchate in Istanbul, Turkey. (AP Photo)
by Daily Sabah with AP Nov 13, 2018 12:00 am

Fener Greek Orthodox Patriarch Bartholomew I scolded Greek Minister of Education and Religious Affairs Kostas Gabroglou on a visit to Istanbul on Saturday for failing to inform him of a deal that seeks to distance church and state, according to a report by a Greek newspaper.

"You are an Istanbulite. You should've provided advance notice," Bartholomew told Istanbul-born Gabroglou, according to Athens-based Ta Nea daily.

Bartholomew I has honorary and historical primacy over the other patriarchs of the Orthodox world. He is considered to be first among equals – he does not have the right to intervene in the religious affairs of other Orthodox churches, but has spiritual and official precedence. The Greek Orthodox Church based in Istanbul is regarded as the highest body in Orthodox Christianity and holds canonical authority over some of the Orthodox churches in Greece.

Bartholomew's anger stems from the lack of approval from the Fener Patriarchate before the agreement was reached in Athens. Under the deal, reached between Greek Prime Minister Alexis Tsipras and Archbishop Hieronymos of the Church of Greece, the Greek state would remove some 10,000 priests and auxiliary staff from the state payroll, paving the way for a clearer distinction between church and state. The Greek Parliament is currently discussing a revision of Greece's constitution. While it would not change the official religion of Orthodox Christianity, it does foresee a radical separation between church and state, emphasizing the religious neutrality of the state.

The agreement also foresees a settlement to a decades-old dispute over property between the Greek state and the Church, which is one of the country's largest real estate owners.

In a blog post last week, the Fener Patriarchate wrote: "The Church of Greece enjoys autocephaly and is ruled by the archbishop. However, some parts of the country, specifically, Holy Mount Athos, are subject to the jurisdiction of the Constantinople Patriarchate. The Ecumenical Patriarchate has not been informed (about the agreement) despite the fact that it has canonical jurisdiction over the Greek territory."

While the Dodecanese and the island of Crete are under both the administrative and spiritual authority of the national church, the Western Thrace and Ionia regions of northern Greece are spiritually connected to the Fener Patriarchate.

Greece's creditors have long urged the government to sell assets and reduce the number of public sector employees. Under the current system, priests' salaries are paid directly from the state budget as are those of all civil servants.

The annual cost of the priests on the government's payroll is estimated at about 200 million euros.

The agreement reached last week must still be approved by the cabinet, parliament and church leaders.

Tsipras, a known atheist, has long advocated the reform. He was the first Greek prime minister to be sworn in in a secular ceremony in 2015.