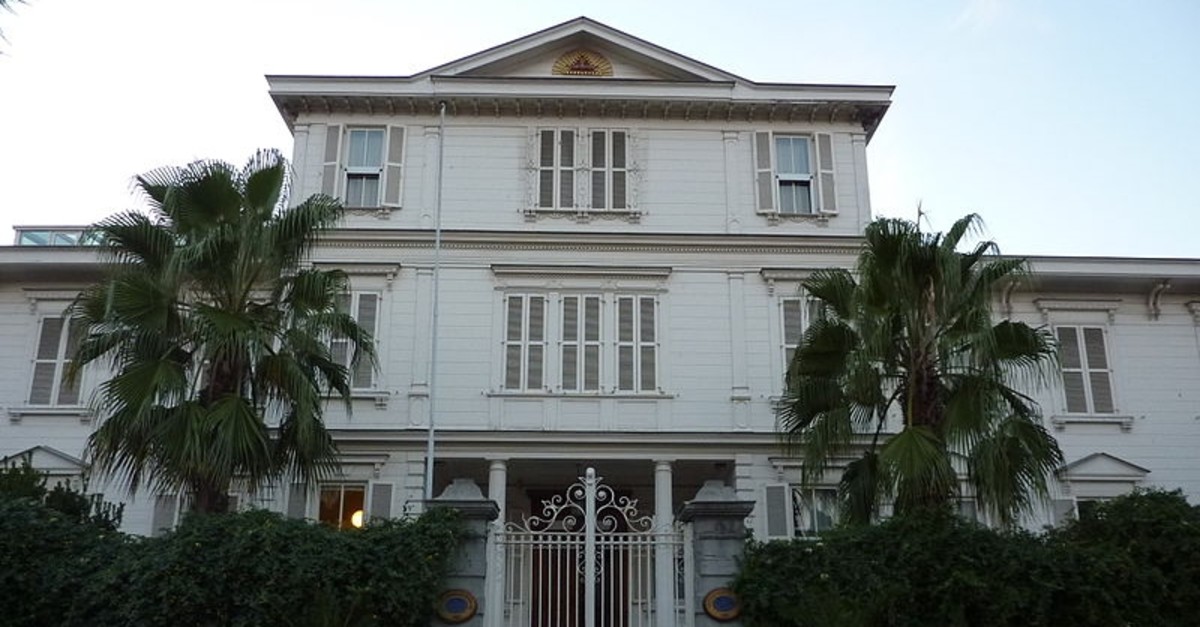 The office building of the Armenian Patriarchate of Constantinople, across the street from the Surp Asdvadzadzin Patriarchal Church. (WIKIMEDIA COMMONS Photo)
by Daily Sabah Jul 10, 2019 10:04 pm

An administrative decision dating back to 2017 that refused two initiatives to elect a new patriarch for the Armenian Orthodox Church was a violation of the right of religious freedom, Turkey's Constitutional Court said in a detailed ruling Wednesday.

The issue that pitted different groups within Turkey's Armenian community and the Istanbul Governorate began in the summer of 2007 when late Patriarch Mesrob II, commonly known by his civilian name Mesrob Mutafyan since he succeeded Karekin II in 1998, fell ill due to dementia, which was diagnosed in 2008.

Under Turkish laws and patriarchate rules, a new patriarch cannot be elected while his predecessor is alive, and Mesrob II's case was the first instance that left the Armenian community puzzled about how to proceed with replacing a living religious leader, especially one that was also viewed as a uniting figure and a representative of the community. Archbishop Aram Ateşyan was appointed to serve as the Patriarchal Vicar in 2008 as the 84th patriarch had to withdraw from his duties.

However, this marked the beginning of a new debate within the Armenian community as two conflicting views emerged since the post was unprecedented. One group centered on Ateşyan appealed to the Istanbul Governorate for an election of a new leader with the title of "co-patriarch." The other group, however, called for a new patriarchal election and also appealed to the governorate.

In June 2010, the Istanbul Governorate tacitly rejected the second group by not responding to their appeal while also rejecting the first group's appeal, arguing that the post of patriarch was not empty, and hence an election for a "general acting patriarch" could be held instead. The Clerical Committee of the patriarchate voted 25-1 to elect Ateşyan to the acting patriarch post in July 2010, and a cabinet decision in August confirmed this appointment.

Following heated debates and even protests, which were mainly aimed at Ateşyan, the Clerical Committee finally decided to "retire" Mesrob II in late October 2016 based on ancient laws and church traditions that enable the annulment of the vows of religious leaders if they "disappear" for seven years, and declared the patriarch's post vacant, which paved the way for a patriarchal election. Earlier in March, a court had assigned Mesrob II's mother Mari Mutafyan as his legal guardian due to his illness.

In March 2017, the Clerical Committee elected the Primate of the German Diocese of the Armenian Apostolic Church Archbishop Karekin Bekçiyan (Bekdjian) as deghabagh (locum tenens), a trustee that leads the patriarchate until the election. However, Ateşyan did not resign from his post and a petition filed to the Ministry of Interior to hold the elections was left unanswered. Bishop Sahak Maşalyan, who was serving as the head of Clerical Committee, announced his resignation in February, accusing Ateşyan of delaying the elections that would be held if the council and local authorities approved, although he later retracted his resignation. Ateşyan finally bowed to the pressure from the community and resigned on May 24, 2017.

In the meantime, the Istanbul Governorate said in a statement that the deghabagh election was invalid since Mesrob II was still alive. This view was reiterated in February 2018 in the governorate's written statement addressed to the patriarchate, in which Bekçiyan was referred to as the "so-called" deghabagh and Ateşyan was referred to as the acting patriarch. Shortly after, Bekçiyan returned to Germany, saying he did not want to be involved in a debate that could tear down the community.

Two Turkish-Armenian citizens used their rights to individual application to the Constitutional Court in October 2014 and later in February 2016, saying the administrative rulings breached their right of religious freedom. The court ruled in favor of the applicants on May 22 in an 11-4 vote. In its detailed ruling released on July 10, the court said that the Ministry of Interior misinterpreted the Ottoman-era regulation, which required an election not only for death or resignation of a patriarch but also for other "various reasons", without specifications. The court noted that there had been previous cases when a patriarch had abandoned his seat without resigning and an election was held afterwards. The court also said in the elections of 1950, 1961, 1990 and 1998 during the Republican era, civilians had a say over clergymen, and the postponement of the elections ignored their will. The fact that the ministry decided on which conditions the patriarch could be elected also breached the freedom of religion and faith enshrined in the constitution, the court said.

Meanwhile Mesrob II, a respected figure within the Armenian community and in general Turkish public opinion, died on March 8, ending this decade-long debate. His funeral at the Surp Asdvadzadzin Church in Istanbul was attended by thousands of Turkish-Armenians and dignitaries. The election process for a new patriarch was relaunched after the mourning period ended in mid-April, and Interior Minister Süleyman Soylu visited the patriarchate on May 13 to discuss matters related to the elections. The process was briefly postponed due to the re-run of the Istanbul mayoral elections on June 23, but on July 4, the Clerical Committee elected Bishop Maşalyan as the deghabagh with 13 votes against Ateşyan's 11. The patriarchate is now expected to reveal the election date and its final conduct soon.

Like other non-Muslim communities whose population has dwindled over the years due to a lack of rights and oppressive state policies in the past, the Armenian community has seen a reinstatement of their rights, such as the return of properties once seized by the state, in recent years.

The Armenian Orthodox Patriarchate has the largest congregation in the community and its roots can be traced back to the conquest of Istanbul by the Ottomans and Mehmed II (Mehmed the Conqueror) who is credited with paving the way for the establishment of a patriarchate. Before the sultan granted them religious freedom, Armenians were forced to pray in the Byzantine churches of other communities in the city. The patriarchate was an influential religious authority for Armenian communities around the world until the early 20th century, but its influence has decreased over time, especially after the Armenian population in Turkey diminished following World War I and after the collapse of the Ottoman Empire.

Mutafyan was born in Istanbul and studied sociology and philosophy in the U.S. before returning to Turkey. He was ordained by the priesthood in 1979 and appointed pastor to Kınalıada, an island near Istanbul where a small Armenian community lives. He was hailed as a uniting figure for the Armenian community during his short tenure and was vocal in his efforts to suppress divisive rhetoric between Turks and Armenians. In one of his last speeches, the patriarch called upon Turkey to develop relations with Armenia and the Armenian diaspora, despite a dispute over the World War I deaths of Armenians in the Ottoman Empire, which the diaspora and the Armenian government brand as "genocide." Like Hrant Dink, a prominent Turkish-Armenian journalist who was assassinated by an ultranationalist in 2007, the patriarch had advocated dialogue between Turkey and Armenia for mutual understanding.