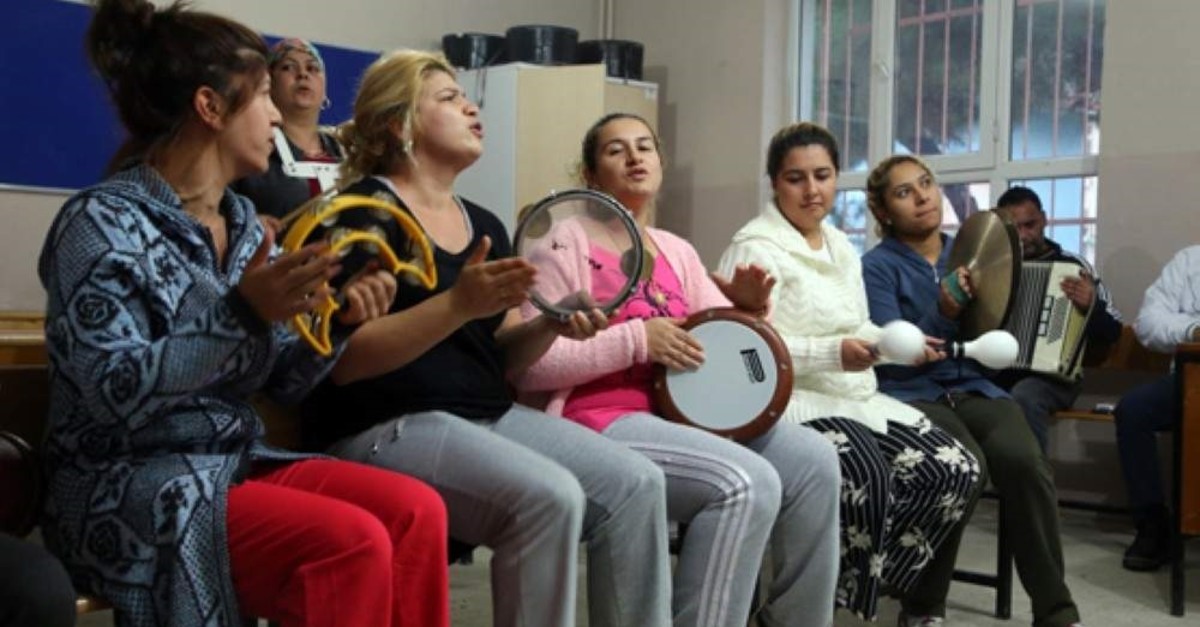 Roma women attend a music class, part of a training program for the community, in Tekirda? in this undated photo. (AA Photo)
by Daily Sabah with AA Dec 12, 2019 3:31 pm

The underprivileged Roma community heads into 2020 with the hope of a better life as the government is set to unveil a new action plan to address the problems they face, from education to accommodation to income

President Recep Tayyip Erdoğan recently announced that a new action plan will be implemented in 2020 to address the problems of the Roma community in Turkey. The plan for 2020 and 2021 seeks to boost the living standards of the community, which has long been forced to live on the fringes of society.

With the steps being taken by the government, Roma children will be prevented from dropping out of school at an early age while entrepreneurship programs will support Romani businesses. The government will also create solutions that will address accommodation problems while social services will boost their workforce to advise and assist the members of the community.

Roma citizens have long been excluded from society, as was the case in most European countries, amid a deep-seated prejudice toward the community. President Erdoğan issued an apology on behalf of the state to Roma citizens in 2010, and in recent years, the government has rolled out a series of steps to improve their social inclusion. The first stage of an action plan to help the community was unveiled in 2016.

In the second stage of the plan, the government will focus on education, employment and accommodation for the community members, as well as health, social services and social aid.

Surveys show education is a key component to helping improve the lives of Roma citizens. Most children have limited access to education and school attendance rates are low. Education is one of the challenges plaguing the community, which often avoids enrolling their children in schools due to discrimination or because of poverty, which often forces children to skip school to earn a living for their families. The plan aims to prevent low attendance rates and help students who drop out of school resume their education. The government will also launch an awareness campaign for parents on the social and economic benefits of education and will better inform them about social aid for education. Another part of the plan aims to better integrate Roma children into schools and to end their isolation from their peers. The Ministry of National Education will oversee projects to ensure a higher schooling rate for children and offer them social, psychiatric and academic support.

Most Roma citizens work at low-level and low-paying jobs due to their limited access to education. The majority of the community is self-employed. The action plan seeks to make Roma citizens better qualified in the job market. The government will cooperate with employers and non-profit groups for equal employment opportunities for the community and to improve community members’ vocational skills. Entrepreneurship training programs will be launched to promote business opportunities for community members and micro-loans – and similar financial tools – will be employed to help Roma citizens start their own businesses. Another step in the plan seeks to curb child labor in the community.

In areas with a high Romani population, the Turkish Employment Organization (İŞKUR) will launch campaigns to inform people of job opportunities. İŞKUR plans to reach at least 12,500 people with its programs on job-seeking skills training. Some 1,000 citizens will benefit from entrepreneurship training programs which will be held in cooperation with non-profit groups. At least 3,000 members of the community will be provided vocational training classes while the government will organize workshops dealing with employment problems facing the community.

The Ministry of Environment and Urban Planning will be tasked with working to improve housing for the community and help to restore residences in need of maintenance. Community members living in unhealthy environments, in poor or insufficient conditions, or in temporary residences such as tents will be provided with permanent residences. The government plans to reach out to more members of the community in a cash assistance program for accommodation. Currently, Romani households benefit from TL 15,000 in a building reparation plan and TL 25,000 for the construction of new houses.

A survey shows that 94.4% of the community has healthcare benefits but the government aims to further increase this share. Awareness campaigns will be held for the community to have better access to health services, while the capacity of clinics in neighborhoods with large Roma populations will be increased, along with mobile health services for the community. Some 10,000 Romani citizens will be educated on health issues like chronic illnesses, epidemic diseases, childcare, tobacco control, nutrition and physical exercise.

The government will also increase the capacity of Social Services Coordination Units in areas with a high Romani population to increase access to public services. About 25,000 Roma citizens will be given free consultation on accessing social services. Another 300,000 people will be informed about their rights. Twenty-five Social Solidarity Centers for social services assistance will be opened for the community within the next two years.

Yücel Tutal, head of Romani Rights Federation, said the government agencies did not have much cooperation with Romani non-governmental organizations and they expected more cooperation in the process to improve the lives of the community. Tutal told Anadolu Agency (AA) Thursday that the implementation of the first stage of the action plan had encountered some problems. “There are still Romani people living in tents and there have been problems for the employment of university graduates and decreasing school attendance rates,” Tutal said. He said the second stage of the action plan was more comprehensive and they would “follow” their implementation.

“The primary problems for the Romani people are prejudice and discrimination. We can’t solve other problems without fighting prejudice and discrimination. Every problem is connected to another. You can’t solve the education problem without solving the accommodation problem. Access to education is possible only if children live in a healthy environment. They can’t go to school if their parents are unemployed,” he said.