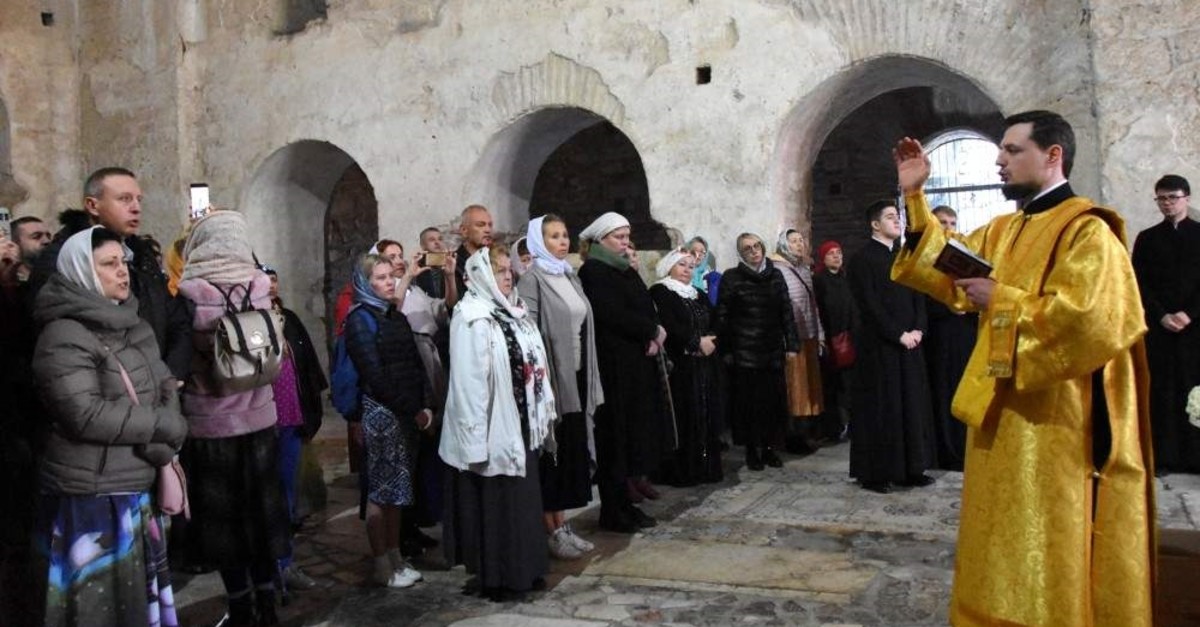 Members of the Orthodox community in Turkey attend a religious service at a historic church that now functions as a museum, Antalya, Dec. 19, 2019. (DHA Photo)
by Daily Sabah with Agencies Dec 19, 2019 8:59 pm

St. Nicholas, a bishop recognized as a saint in the Orthodox world, was remembered by the Russian Orthodox community Thursday in Turkey's Mediterranean city of Antalya, where his tomb is believed to be located. The saint is more internationally known as the inspiration for Santa Claus.

Georgiy Sergeev, Turkey's representative of the Moscow Patriarchate, presided over the religious service that marked the anniversary of the saint's death in A.D. 343. Orthodox clerics from Russia, officials from the Russian Consulate in Antalya and some 250 Russian nationals from Russia and Antalya, home to a large Russian expatriate community, attended the service at Aziz Nikolaos Memorial Museum, formerly a church built upon another ancient church where the saint is believed to have served in his lifetime.

The saint, praised for his generosity, especially toward children, is venerated by all denominations in Christianity, and it was this generosity that led to the evolution of his image into modern-day Santa Clause. Originally the son of a wealthy family in Patara, a city on the southwest coast of what was then the Byzantine Empire, Nicholas joined the church at a young age and became the bishop of Myra, or modern-day Demre. Legend has it that Nicholas used to climb on the roof of people's houses and drop coins down their chimney secretly before his identity was revealed by the public. Following his death on Dec. 6, the date became associated with his feast day and when Dec. 25 was declared Jesus' birthday, the two occasions merged. The Greek Orthodox community marks the anniversary of his death on Dec. 6.

Speaking at the religious ceremony, Sergeev said St. Nicholas has been a shared value not only for Christianity but also for humanity. He said they prayed at the service for world peace and happiness and for Andrei Karlov, the Russian ambassador to Turkey who was assassinated in the Turkish capital Ankara on Dec. 19, 2016.