Can Hamilton and Mercedes be stopped? 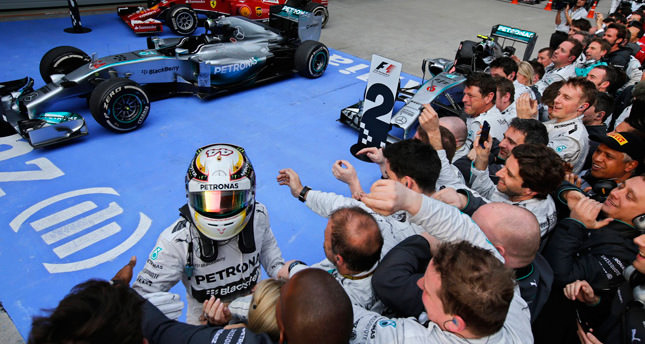 by Apr 21, 2014 12:00 am
SHANGHAI — A clean-sweep for Mercedes including a Lewis Hamilton hat-trick has left the rest of Formula One wondering whether they can keep up this year, even after only four races. The opening exchanges have all been won by Mercedes, who have dropped just 18 points so far after a broken spark plug forced Hamilton out of the season-opener in Melbourne. Since then, Mercedes have enjoyed three consecutive one-two finishes with 2008 world champion Hamilton leading team-mate Nico Rosberg, the winner in Melbourne, home on each occasion.

The Briton was untouchable at Sunday's Chinese Grand Prix, pulling away from pole position to beat Rosberg by 18 seconds and complete a run of three straight F1 wins for the first time. It underlined a power advantage which propelled the Mercedes cars down the 1.3 kilometer (0.8 miles) Shanghai back straight more than 20 kilometers an hour faster than their rivals. Red Bull boss Christan Horner, who saw Daniel Ricciardo and reigning world champion Sebastian Vettel finish fourth and fifth, said his team needed to find a response quickly.

"We're going to give it everything," he said. "I believe we can take the fight to them. We just can't concede too much more ground.

"You know we were 22 kilometres an hour slower on that long straight today. That represented almost 100 metres that we're giving away on the straight. That's where we've got to improve."

Fernando Alonso drove an impeccable race to finish third, Ferrari's first podium of the season which the Spaniard dedicated to outgoing team principal Stefano Domenicali. But the two-time world champion was guarded on whether the result was a breakthrough. He did not seriously challenge the front two, and his team-mate Kimi Raikkonen placed eighth.

"We did improve the car a little bit compared to the first three races, so we felt more competitive," said Alonso, who moved up to third in the drivers' championship on 41 points.

"We will give 100 percent again and we will fight but we need to see how development is these three weeks and if we can bring some extra new parts for Barcelona," he added.

The main consolation for Mercedes' rivals is that they have time to catch up, with 15 races remaining and double points on offer at the season finale in Abu Dhabi. And they will be glad that Rosberg and Hamilton have split the wins between them, leaving them within four points of each other and within sight of the other drivers. But Hamilton's biggest rival is currently shaping as Rosberg, with whom he has sparred since their karting days and who remains narrowly ahead courtesy of his win in Melbourne.

"I plan to keep it that way. (I'm) definitely in the lead and that's good," said Rosberg, who has 79 points compared to Hamilton's 75. One team who may not trouble Mercedes are McLaren, who appear headed for another difficult year after Jenson Button and Kevin Magnussen failed to score any points in Shanghai.

After finishing just fifth in the 2013 constructors' table, they occupy the same position now and could have been lower, if a botched pitstop had not ruined the race of Felipe Massa. The Williams driver was racing strongly in sixth but his challenge was effectively ended when mechanics tried to fix replacement wheels to the wrong side of his car.

"We tried to fit the left on the right and vice versa," head of vehicle performance Rob Smedley told Autosport.com. The one-minute delay put Massa to the back of the field and he eventually finished out of the points in 15th. Eight points for sixth would have put Williams ahead of McLaren in the table. Mercedes already enjoy a sizeable lead in the constructors' standings, with their haul of 154 points putting them 97 clear of second-placed Red Bull.