Piece and friendship rally stops by Istanbul on way to Jordan 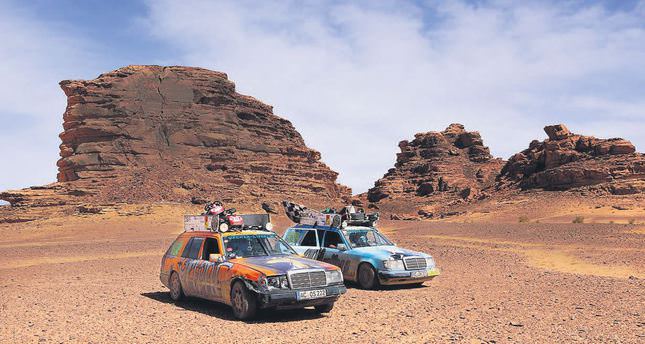 by Daily Sabah May 09, 2014 12:00 am
ISTANBUL — Organized for the eighth time this year, the Allgaeu Orient Rally arrived in Istanbul on May 7 and was welcomed by the Mayor of Istanbul, Hüseyin Avni Mutlu. About 600 rally drivers gathered in Istanbul's historical peninsula in an attempt to break a world record before departing for Ankara.

The rally aims to bring humanitarian aid to those suffering on the route and draw attention to social problems in the area. The drivers will travel to Çorum, Tokat, Ordu, Tunceli, Van, Diyarbakır, Osmaniye and İskenderun in Turkey. After visiting earthquake victims in Van, the rally will make its way to Jordan, the final stop on the route.

The rally is organized by the Classical Automobile Rally Organization and receives support from the EU. The cars were welcomed to Turkey by the vice-governor of Edirne province, Ayhan Özkan, and the chairman of the Edirne Volunteers Association, Tuna Bekleviç, at the Edirnekapı border gate. Özkan noted that he was glad to support the rally as it contributes to promoting both Turkey and Edirne.
Turkish Ambassador to Stuttgart Türker Arı is part of the rally as the leader of the Turkish team. "We arrived in Turkey with about 200 cars from 20 different countries.

I see this as an opportunity to introduce Turkish culture and customs to our guests. We have crossed Slovenia, Croatia, Belgrade and Sofia. We are in Turkey for 13 weeks. The Van stage of the Turkey part will include a lot of cooperation and we'll bring humanitarian aid to those who lost their houses and family members in the Van earthquake," said Arı.

Classic cars, often referred to as "old timers," are used for the rally and will be donated to Syrian refugees in Jordan once the rally comes to an end. Furthermore, the rally will be distributing gifts to local people and children along the way.

The three-week friendship rally was introduced to the public during a press meeting held in Sultanahmet Square with the participation of organizers and stakeholders. Istanbul Governor Hüseyin Avni Mutlu also took part in the meeting. The organizers presented information about the rally route and its logos were placed on participating cars. "We have the chance to promote different regions of Turkey this year. There will be small stationery gifts for students in different cities.

I believe we will gain a lot of volunteer ambassadors," said Mutlu. There are nearly 600 participants and 300 automobiles from 20 different countries, from China to the U.S. and from the Middle East to Europe. The participants will be under harsh road and weather conditions during the rally and carry out special tasks at pit stops. The first task at hand for competitors at each pit stop is to examine their cars. The second chair of the Turkish office of the Peace and Friendship Rally, Mete Düren, noted that he was pleased with the attention they had received from corporations and sponsors.

He said that in recent years the number of people participating from Turkey has risen. This year, Turkey is attending the rally with the 12-member TüvTürk team. The Turkish team was created with the support of Turkish Ambassador to Berlin Hüseyin Avni Karslıoğlu.