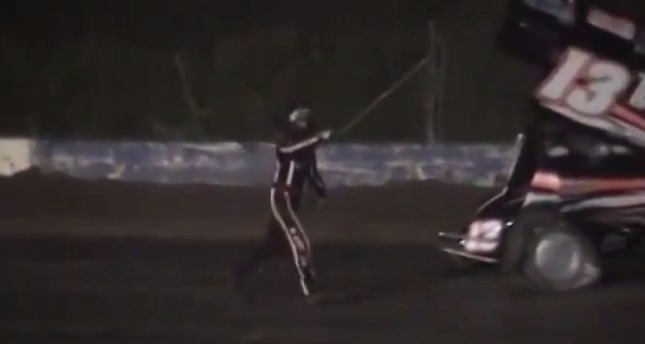 Tony Stewart has been questioned by police after hitting and killing fellow driver Kevin Ward, who was arguing with him. Some spectators said Stewart appeared to aim for Ward

The motorsports world has been in shock since Saturday after NASCAR champ Tony Stewart hit and killed sprint car driver Kevin Ward Jr. in a tragic accident at Canandaigua Motor Sports Park in upstate New York. The 43-year-old was taking part in a dirt-track sprint car race when he collided with another vehicle driven by Kevin Ward Jr.

Ward Jr. clambered out of his car, apparently unharmed, and began gesticulating towards Stewart as he completed the next lap. However, as he strode out into the track, Stewart appeared to "fishtail" and ended up hitting the 20-year-old, sending him flying 15 metres down the circuit. Stewards were on the scene within seconds but the young driver was later pronounced dead at a local hospital. Video of the crash was posted online after the incident and shows Ward Jr walking out onto the track and pointing towards other cars before being struck. "Some spectators present at Canandaigua on Saturday night said Stewart appeared to aim for Ward, after the young driver strode across the track apparently to confront him over their crash," reports The Guardian. "[Other] witnesses said Stewart's car appeared to go into a 'fishtail' skid before hitting Ward." In a statement, Ward Jr's family asked for "time to greive", but the Daily Mail reports that his aunt, Wendi Ward, posted a message on Facebook branding Stewart a "d...". Other members of the family posted tributes to the young driver. However, U.S. police have found "no criminal behaviour" on racing driving Tony Stewart's part but will continue their probe into the bizarre incident in which he struck and killed an up-and-coming driver. "At this time there are no facts that exist that support any criminal behaviour or conduct or that any probable cause of a criminal act in this investigation," Ontario County Sheriff spokesman Philip Povero told reporters on Monday.

Povero said they have interviewed Stewart and several others who witnessed the incident and they say Stewart, who was unhurt, has been cooperative. Povero told reporters they are looking for more video footage of the crash as part of their ongoing investigation. He said they already have two videos of the incident. "We are seeking persons outside that are familiar with racing that can help us review and analyze these tapes to hopefully fully understand the crash," he said. Meanwhile, the 43-year-old American, who missed Sunday's NASCAR Sprint Cup Series race at the Watkins Glen International track, has withdrawn from a second non-NASCAR race Saturday in Plymouth, Indiana. "We at Plymouth Speedway extend our deepest condolences and prayers to the family of Kevin Ward, Jr. and thoughts and prayers to Tony Stewart and his family. Tony Stewart will NOT be racing at Plymouth Speedway this Saturday," race officials said. There is no word yet from Stewart's team, Stewart-Haas Racing, on whether Stewart will compete in a NASCAR race at the Michigan International Speedway on Sunday.

Saturday's incident happened near turn two at the halfway point of a 25-lap Lucas Oil Super Sprint Features dirt race. Stewart first bumped Ward's car and knocked it out of the race. On his next lap Stewart's vehicle collided with Ward, who had climbed out of his car and was walking down the track pointing his finger in the direction of Stewart. As the car passed by Ward it appeared to rev and then fishtail, hitting Ward and dragging him along the track for several meters. An autopsy was performed on the body which showed Ward died of massive blunt force trauma. Ward, of Port Leyden, New York, began competing in Go Kart racing at the age four in 1998. He began sprint car racing in 2010 and won his first career sprint car feature in June 2011. Stewart, who is a multi-millionaire, is part owner of Stewart-Haas Racing, whose drivers include Danica Patrick. Despite his success, he continues to compete in non-NASCAR races on small and dirt tracks across America against drivers of varying talent levels and ages, including some in their teens. The hard-headed Stewart has a history of dust-ups with other drivers. Two years ago after a crash he walked onto a track at Bristol Motor Speedway in Tennessee and threw his helmet at Matt Kenseth's car. When Stewart competed in an event at Canandaigua in July 2013, he caused a crash that involved 15 drivers. In Fontana, California last year, Stewart stormed down pit road and got into a fist fight with Joey Logano, whom he accused of trying to block him.
Last Update: Aug 13, 2014 1:51 am
RELATED TOPICS