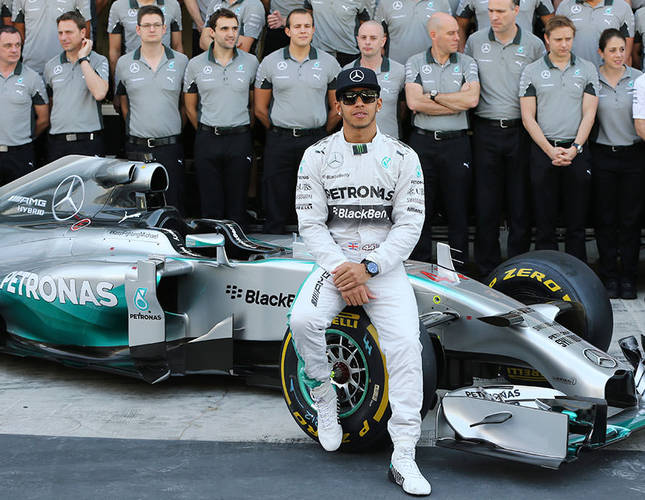 Hamilton stamped his authority on the race from the start by immediately taking the lead after title rival Rosberg struggled to get away from pole position and later suffered a loss of power.

Even without Rosberg's problems, the Briton was in control and took the chequered flag at the Yas Marina circuit, some three seconds ahead of Felipe Massa in a Williams for his first title since winning with McLaren in 2008.

Hamilton was immediately congratulated by Prince Harry over team radio, who said: "Thank you very much Lewis for not letting the British public down.

Hamilton gave a whoop of joy, saying, "World champion, oh my god, can't believe it, thanks everyone"

Prince Harry said: "Well done Lewis you are a legend."

It was Hamilton's 11th victory of the year and the 16th win of the season for Mercedes, the team breaking the single-season record for wins by a constructor which they had shared with McLaren (1988) and Ferrari (2002, 2004).

Hamilton's stunning start took some of the pressure off the pre-race championship leader, who needed to finish first or - in the event of a Rosberg victory - second.

Hamilton was also helped by a poor start from Valtteri Bottas in a Williams, a potential threat to second place, who also began poorly and fell five places to eighth.

Hamilton came in for new tyres on lap 10, with Rosberg emerging from his pit stop two laps later three seconds behind.

It was a gap that remained roughly the same until a Rosberg error when he ran wide on lap 24, falling to more than five seconds behind Hamilton - and the start of Rosberg's problems.

A lap later Rosberg reported a loss of power and within two laps had fallen to 13 seconds behind before being passed by Massa.

Hamilton pitted again on lap 31 of the 55 laps, while Rosberg was now looking merely to finish, telling his team over radio, "Just get me in the top five or six."

Rosberg needed at least fifth place to have a chance of the title - should Hamilton fail to finish - and emerged from his second stop on lap 35 in seventh position, with three drivers ahead of him yet to make their stops.

Mercedes confirmed Rosberg's car had an Energy Recovery System (ERS) problem, and the German's difficulties increased when he complained of an additional throttle issue.

Massa left his second stop to lap 43, emerging 11 seconds behind Hamilton, who now had the world title firmly in his sights while Rosberg continued to struggle and gradually fell back to 14th.

Rosberg was told to come in with two laps remaining but he told his team, "I'd like to go to the end."

Bottas meanwhile recovered for third, ahead of Daniel Ricciardo in a Red Bull and Jenson Button in a McLaren and the Force India pair Nico Huelkenberg and Sergio Perez, with outgoing world champion Sebastian Vettel eighth in his last race for Red Bull.

Among those forced to retire were Toro Rosso's Daniil Kvyat and Pastor Maldonado who had to park his Lotus with the car's rear in flames.