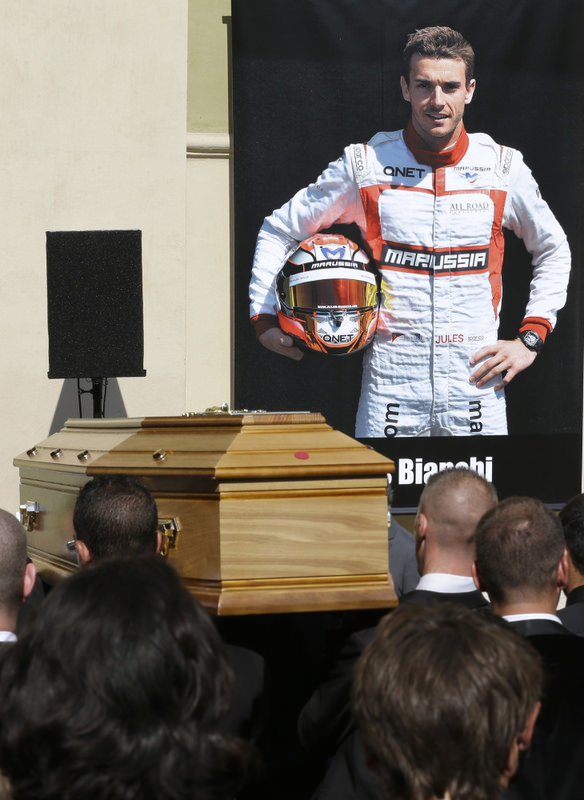 by Jul 22, 2015 12:00 am
Formula One turned out in force Tuesday to pay its last respects to Jules Bianchi at the 25-year-old French driver's funeral in his hometown of Nice.

World champion Lewis Hamilton and many of Bianchi's pitlane colleagues joined family and friends of the talented young Marussia driver who died on Friday, nine months after his devastating accident at the Japanese Grand Prix. Two giant portraits of Bianchi in full racing gear adorned the walls either side of the cathedral's main entrance. His coffin, with his helmet poignantly resting on it, was carried from the hearse into the cathedral by a group of young drivers, described by Father Sylvain Brison as Bianchi's "racing brothers."

Hamilton and his Mercedes team-mate Nico Rosberg, who had made the short trip from their homes in Monaco, as well as Jean Todt, head of F1's governing body, the FIA, and the French Sports Minister Thierry Braillard, had arrived discreetly in advance for what his parents had requested was to be an intimate farewell to their son. On Monday, Ferrari had revealed that Bianchi would have joined Vettel next season as Kimi Raikonnen's replacement. Bianchi was the first Formula One driver to die as a result of a racing accident since triple world champion Ayrton Senna in San Marino in 1994. Senna's arch-rival, four-time world champion Alain Prost, was among the mourners saying goodbye to Bianchi. Bianchi suffered a traumatic brain injury when his car careered off the rain-drenched Suzuka circuit during the Japanese Grand Prix on Oct. 5 and smashed into a recovery truck at around 200 kilometers an hour.

Born in Nice in 1989 to Italian parents, Bianchi had racing in his blood. His father Philippe was a go-kart specialist and his great-uncle Lucien competed in 17 Grands Prix before he was killed in a crash in 1969 at the age of 34.
Last Update: Jul 22, 2015 1:21 am
RELATED TOPICS