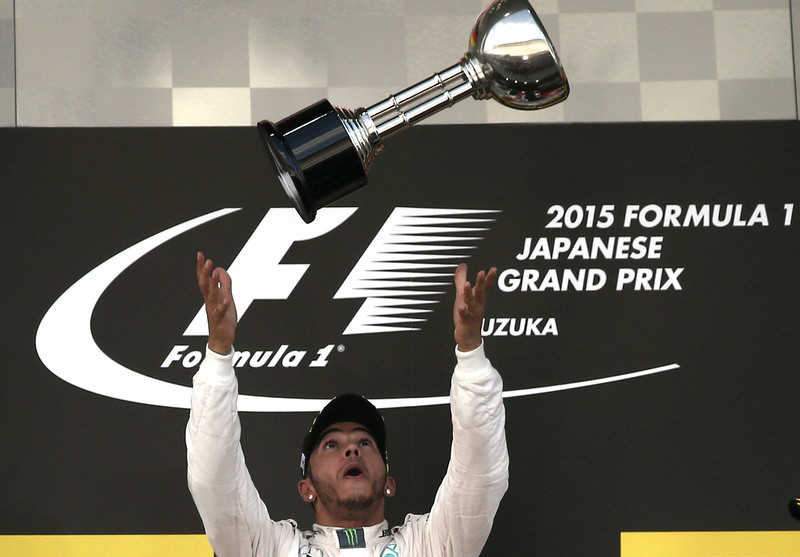 Mercedes driver Lewis Hamilton pulled off an aggressive passing move on teammate Nico Rosberg and went on to win the Japanese Grand Prix on Sunday, moving a step closer to claiming his second straight Formula One title.

On a sunny afternoon at Suzuka, in marked contrast to the dark and tragic 2014 race that he also won, the double world champion seized the lead from pole-sitter Rosberg at the start and never looked back.

The win was the Briton's eighth of the season, with Rosberg anchoring the eighth one-two finish for dominant Mercedes as the champions returned to form after a mysterious dip in Singapore last weekend.

Rosberg took the chequered flag 18.9 seconds behind Hamilton with Ferrari's Sebastian Vettel, the winner in Singapore, finishing third in an exact repeat of last year's top three at Suzuka.

Hamilton now has 277 points to Rosberg's 229 with Vettel dropping back on 218 but refusing to give up his championship hopes until mathematically ruled out.

Mercedes, who have now won 11 of 14 races, moved a step closer to retaining their constructors' title with 506 points to Ferrari's 337.

"For me to come here to a race where I used to love watching Ayrton drive, to match his wins... I can't really describe it. It doesn't feel real at the moment," said a delighted Hamilton after saluting the fans from the podium.

If last year's post-race ceremonies were muted in the aftermath of the late Jules Bianchi's horrific and ultimately fatal accident, only a brief microphone failure prevented Hamilton from expressing his joy on the podium this time.

"I am so happy right now," he said, before Vettel poured champagne over his rival's head. "The team did a fantastic job this weekend, it's great to be back up here as a team with a one-two.

"The car was beautiful to drive today."

Rosberg had gone into the first two corners side by side with Hamilton but was forced wide to avoid a collision and dropped to fourth as Hamilton made his getaway.

"Lewis just got a better start, fair play and it was a good battle into turn two," said the German. "He had the inside and just made it stick and that was the end of it there. Then it was great to fight to second place.

"Second was the best possible after that so I'm happy with the fightback."

Germany's Nico Hulkenberg was sixth for Force India, with the Lotus duo of Romain Grosjean and Pastor Maldonado seventh and eighth in a boost for the financially-troubled team.

Dutch hotshot Max Verstappen who turns 18 next week completed his last race as a 17-year-old in the points, taking ninth place for Toro Rosso ahead of Spanish team mate Carlos Sainz.

There was disappointment and dismay for McLaren at engine partner Honda's home track, with Spaniard Fernando Alonso making his feelings painfully clear for the Japanese manufacturer on the way to 11th place.

"I am getting passed down the straight like a GP2 (car)," he exclaimed angrily after two cars went past, one on each side. "This is embarrassing, very embarrassing."

The double world champion returned to the theme later as Verstappen passed without problem to drop him out of the points: "GP2 engine, GP2 engine," he exclaimed.
RELATED TOPICS