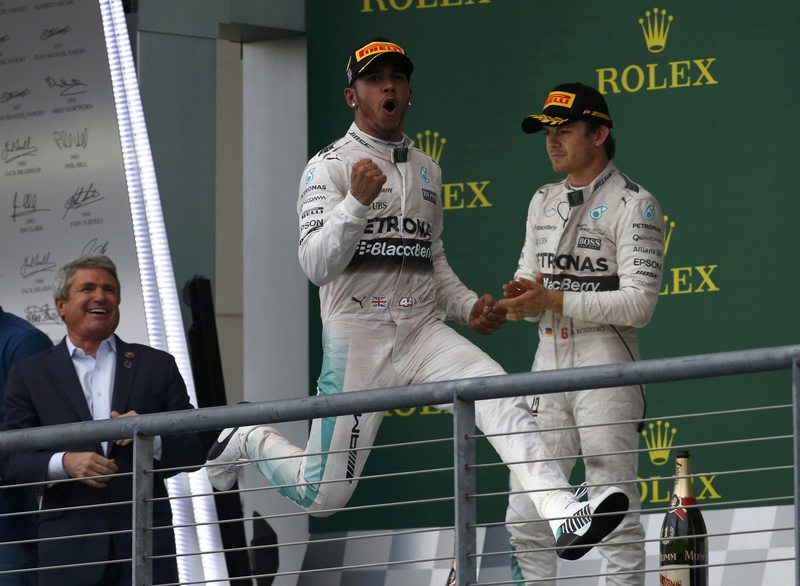 Hamilton becomes the first Briton to retain the title and is only the second Brit to win three championships after Jackie Stewart. He also matched his boyhood idol Aryton Senna on three while only Michael Schumacher (7), Juan Manuel Fangio (5), Alain Prost and Sebastian Vettel (both 4) have won more.

The Grand Prix win, and the championship, was secured on lap 49 out of 56 when leader Rosberg ran wide on turn 15, effectively handing the race to his rival. Vettel, hampered by a grid penalty for an engine change, could finish only third despite charging through the pack from 13th.

"It's the greatest feeling of my life," Hamilton said on team radio. "Thank you guys."

Hamilton now has 327 points with Vettel on 251 and Rosberg 247 with only 75 available from the remaining three races of the campaign.

The torrential rain which battered the Circuit of the Americas on Friday and Saturday, forcing qualifying to take place Sunday, had eased by race time but the track took time to dry out and spray was an early issue.

Hamilton started second behind Rosberg promptly had the edge on his rival from the start and took the lead while the German, forced wide, lost ground to Red Bull duo Daniel Ricciardo and Daniil Kvyat and even, briefly, Sergio Perez in Force India.

That was just the beginning of a sensational first half to the race though as Rosberg quickly fought back to third, only to fall back on lap 13 when Ricciardo took advantage of Kvyat's over-taking move n Rosberg to skip both.

The Aussie then closed in on Hamilton, who fell down the pack by losing out to Ricciardo on the inside line at turn 18 on lap 15 and to Rosberg on the back straight of lap 18.

Rosberg's quicker Mercedes then got the better of Ricciardo's Red Bull to lead and, having pitted on lap 20, held a nine second lead ahead of both Red Bulls and Hamilton.

A safety car on laps 27-32 slashed Rosberg's lead to nothing due to Marcus Ericsson stopping on the track. Rosberg and Hamilton stayed out on soft tyres but Vettel took the opportunity to change and selected mediums, likely targeting a run to the end.

When Ricciardo clashed with the other Force India, Nico Huelkenberg, to cause a virtual safety car, Hamilton elected to stayed out again to claim the lead while Vettel and Rosberg changed to fresh tyres.

It is doubtful if Hamilton, on old rubber, could have held on with Rosberg and Vettel behind him but Kvyat spinning off on lap 43 caused another interruption and gave him the chance to pit.

He emerged ahead of Vettel but behind Rosberg, and when the final safety car pulled in he had 10 laps in which to catch the German and win the title.

In the event, he had little need to do much as Rosberg's unforced error gave him a simple pass. The drama then turned to Rosberg holding off Vettel for third and when he did so he had effectively secured the title for his colleague.

Ricciardo finished down the field in 10th while Max Verstappen of Toro Rosso had an incredibly strong performance to finish fourth. Perez was fifth while Jenson Button made the most of the confusion to claim sixth, and some rare points, for McLaren.

Alexander Rossi, driving in his home race for Manor, will also be thrilled with 12th. On the other hand it was a day to forget for both Williams drivers, Felipe Massa and Valtteri Bottas who retired, while Sauber claimed a ninth place through Felipe Nasr on their 400th grand prix.