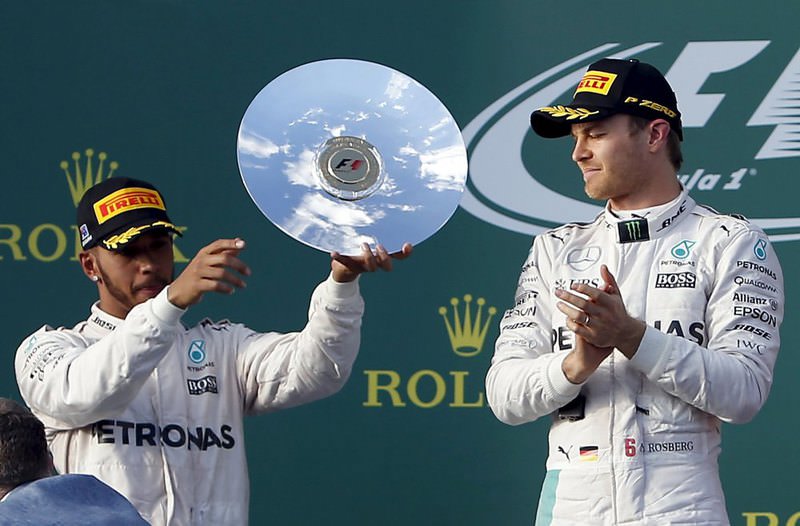 Mercedes's Nico Rosberg won a dramatic Australian Grand Prix, after a huge crash by McLaren's Fernando Alonso. A bad start dropped Lewis Hamilton from pole to sixth but he fought to finish second

The red flags came out after a high-speed collision between McLaren's Fernando Alonso and Esteban Gutierrez of Haas about a third of the way through the race, and when it resumed, the Mercedes cars were able to continue to the finish on the harder tire, while Vettel was forced to pit to change rubber.

"It's the perfect start," Rosberg said. "The strategy was crucial today. It was the tire choice after the red flag. I was glad to see they (Ferrari) were on the super-soft (compound) and happy that I could keep up on the medium."

Local favorite Daniel Ricciardo of Red Bull was fourth, falling just short in his bid to become the first Australian on the podium at his home race.

Williams driver Felipe Massa was fifth and Romain Grosjean sixth to give American team Haas an impressive points finish in its first race. An emotional Grosjean told the team over the radio that "this is a win, unbelievable."

The crash between Alonso and Gutierrez occurred when the Spaniard's McLaren rammed into the back of Gutierrez, who was breaking to make the corner at Turn 3. The McLaren hit the concrete barrier and flipped over twice.

The car was a crumpled wreck but Alonso was able to climb out, and though clearly sore as he limped away, he shook hands with Gutierrez, who had walked over quickly to see if he was injured. The race was stopped for 22 minutes before resuming.

Force India's Nico Hulkenberg finished seventh and Valtteri Bottas of Williams was eighth. The Toro Rosso pair of Carlos Sainz Jr. and Max Verstappen finished ninth and 10th after the frustrated Dutchman collided with his teammate with four laps to go in a misjudged attempt to overtake him.

Hamilton was pleased to have finished second after dropping down to seventh on the opening lap following a slow start. He was behind Rosberg in the run to the first corner after Vettel had speared in between them with much better acceleration off the line.

Rosberg ran onto the curb at the first bend, forcing Hamilton to break heavily into Turn 2 as other cars made their way around the outside.

"I did the best I could after a difficult start damage limitation really," Hamilton said. Vettel was left to rue the decision to fit the softest tire at the restart.

"In hindsight, maybe we could have done something else but I don't want to blame anyone," Vettel said.