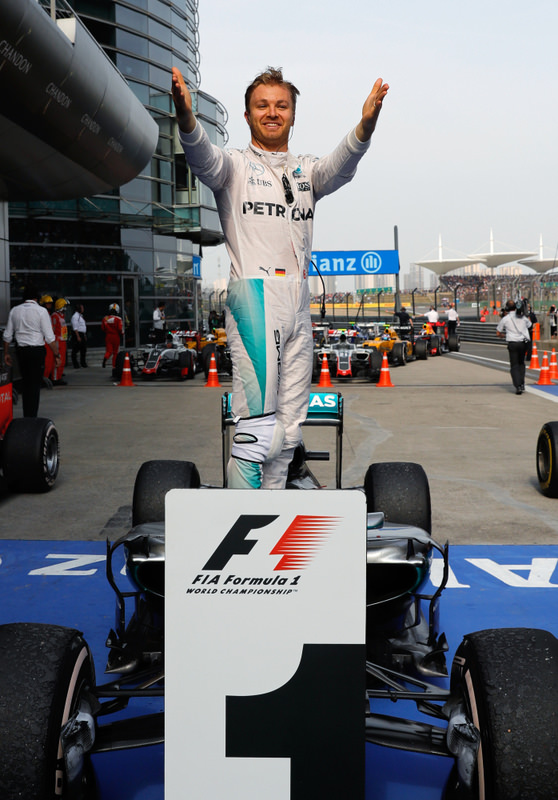 Nico Rosberg stormed to victory in a chaotic Chinese Grand Prix, methodically completing a hat-trick of wins to extend his perfect start to the 2016 Formula One season

Nico Rosberg of Mercedes captured the Chinese Grand Prix with ease on Sunday to extend his perfect start to the Formula One season and become just the fourth driver in history to win six straight races. Ferrari's Sebastian Vettel, who collided with teammate Kimi Raikkonen at the first corner, finished second, 37.7 seconds behind Rosberg, while Red Bull's Daniil Kvyat used an aggressive race strategy to take third - only the second podium of the 21-year-old's career.

Rosberg started on pole position and led nearly the entire race by a wide margin to win his third race to start this season and his sixth consecutive dating back to last year. Every driver who has started an F1 season with three straight wins went on to win the title that year.

"It was a great weekend here for me in China. It's a special place for me - first pole, first win here (in 2012)," Rosberg said. "I was just pushing to try to get the best gap possible. I'm glad that it worked out so well."

Hamilton had been forced to start in the back row after an engine problem on Saturday prevented him from setting a time in qualifying, and was also a victim of the first-corner chaos. He lost his front wing, triggering the first of an extraordinary six pit stops for the reigning F1 champion. The trouble at the first bend came when Kvyat made an aggressive pass on the inside of Vettel, causing the German to swerve outwards to avoid contact and colliding with Raikkonen on his outside.

An angry Vettel fumed on his radio, "Kvyat's attack was suicidal, there was no way he could have made the corner with that speed."

When Raikkonen returned to the track, Sauber's Felipe Nasr swerved to avoid him and collided with Hamilton, dislodging the front wing of his Mercedes, which briefly got trapped beneath his car.

Defending F1 champion Hamilton feels he has a "dark cloud" over him after his early-season struggles continued. But the Mercedes driver is trying to stay positive with a long season ahead of him. After dominating Formula One for much of the past two seasons, Hamilton has now failed to win in six straight races - his longest drought since 2013. His seventh-place finish in Shanghai is also his worst performance in a race that he's completed since the Brazilian Grand Prix at the end of 2013.

Hamilton's troubles have come as his teammate, Nico Rosberg, has surged to the top, winning the past six races to take a 36-point lead over Hamilton in the drivers' standings this season - 75 to 39. It's a large deficit to make up, but not as daunting as Hamilton initially thought.

"I thought it was 50 points," he said with a laugh after the race.

Hamilton also trailed Rosberg by 29 points midway through the 2014 season and was able to win six of the final seven races to capture the championship. He said it might be harder to do the same this year, but hopefully not impossible.

"It doesn't feel any nicer than it did back then. If anything, it feels worse perhaps now because it's obviously just gone one negative after the other," Hamilton said. "But, of course, there's a long, long way to go. A lot's going to happen. It's just that I have no more jokers available, really."

Hamilton's season hasn't lacked for drama. At the Australian Grand Prix, he got off to a poor start and finished runner-up to Rosberg. Then, at the Bahrain Grand Prix, there was another poor start and a collision with Valtteri Bottas at the first corner that left him with a damaged gearbox and a third-place finish.

"But this is a part of motor racing. ... If we fail this weekend, we'll get up and try harder the next time." Hamilton said.
RELATED TOPICS