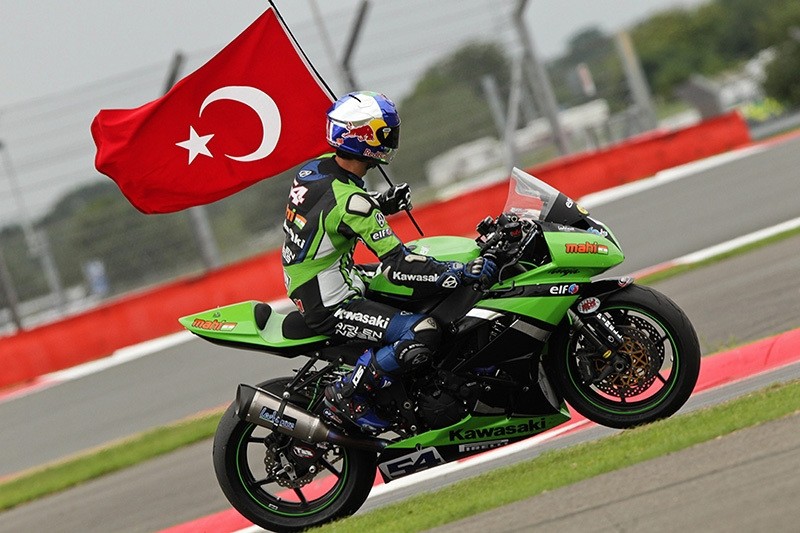 Kenan Sofuoğlu beat all his challengers to win at the Gaerne Spanish Round and was crowned Champion once again. He is the only rider this season to have won more than one race and has secured his remarkable fifth Supersport World Championship

Kawasaki Puccetti Racing's Kenan Sofuoğlu was already the most successful rider to have ever competed in the Supersport World Championship. He is truly his own competition, setting the bar even higher by rewriting his own record yesterday to win his fifth World Supersport Championship. Only his rookie teammate and main rival Randy Krummenacher could have prolonged the inevitable from happening, but after the young Swiss rider crashed out of the race on lap 5, Sofuoğlu only needed to finish the race to seal the deal. But in typical style, simply finishing wasn't enough. Sofuoğlu beat all his challengers to win at Gaerne Spanish Round and was crowned Champion once again.

Born in the Turkish town of Akyazı (whose postcode is 54 and the number with which Sofuoğlu has always raced), he began his professional career in 2003, missing out on the IDM Supersport title by just ten points. That same year he also made his debut in the World Supersport Championship, competing at the rounds in Valencia, Oschersleben and Magny-Cours.

His first two titles came with Hannspree Ten Kate Honda in 2007 and 2010 respectively. He achieved the crown again in 2012, that time with Lorenzini Kawasaki. During this phase, Sofuoğlu also competed in the Moto2 World Championship in 2010 and 2011. In the second of the two years, he finished on the podium at Assen, beaten only by future MotoGP World Champion Marc Marquez.

Sofuoğlu's title defence story of 2016 got off to a rocky start, after he crashed out of the first race at Phillip Island to walk away with zero points, while Krummenacher cemented his position as the Turk's most dangerous rival. The Swiss led the overall standings for the first four rounds, but lost his advantage in Imola, where Sofuoğlu scored his second victory of the year following his first win in Aragon. His road to triumph seemed set from then, adding another three consecutive victories to his name at Donington, Misano and then at Lausitzring after the summer break.

Rather than slowing down during the summer break, Sofuoğlu only sped up. The Turkish National Idol used the break to attempt to beat the World Land Speed Record on a motorcycle. He achieved this milestone riding a Kawasaki Ninja H2R, reaching 400 km/h on a new bridge built near Istanbul.
Aside from winning championships and breaking world records, Kenan Sofuoğlu has a philanthropical side too. The 32 year old is very involved in helping nurture young Turkish talent and catapult their careers in different World Championships. Toprak Razgatlıoğlu is a stellar example of Sofuoğlu's talent project, with the young rider also racing for Kawasaki Puccetti Racing in the STK1000 category.

Sofuoğlu's first chance at sealing the 2016 WorldSSP Championship came two weeks ago at Magny-Cours. He was blisteringly fast all weekend and everything seemed set for the champion to celebrate for a fifth time, but an uncharacteristic fall with eight laps to go only prolonged what has happened today. Incredibly, this season has seen Sofuoğlu take 38 race victories and 77 podiums. He is the only rider this season to have won more than one race and has secured his remarkable fifth Supersport World Championship, still with a round to go. 2017 will see the Champion compete in World Supersport once again with Kawasaki Puccetti Racing as he attempts to trump his own achievement and defend his title again.

The ranking of the riders after the championship session's 11th race