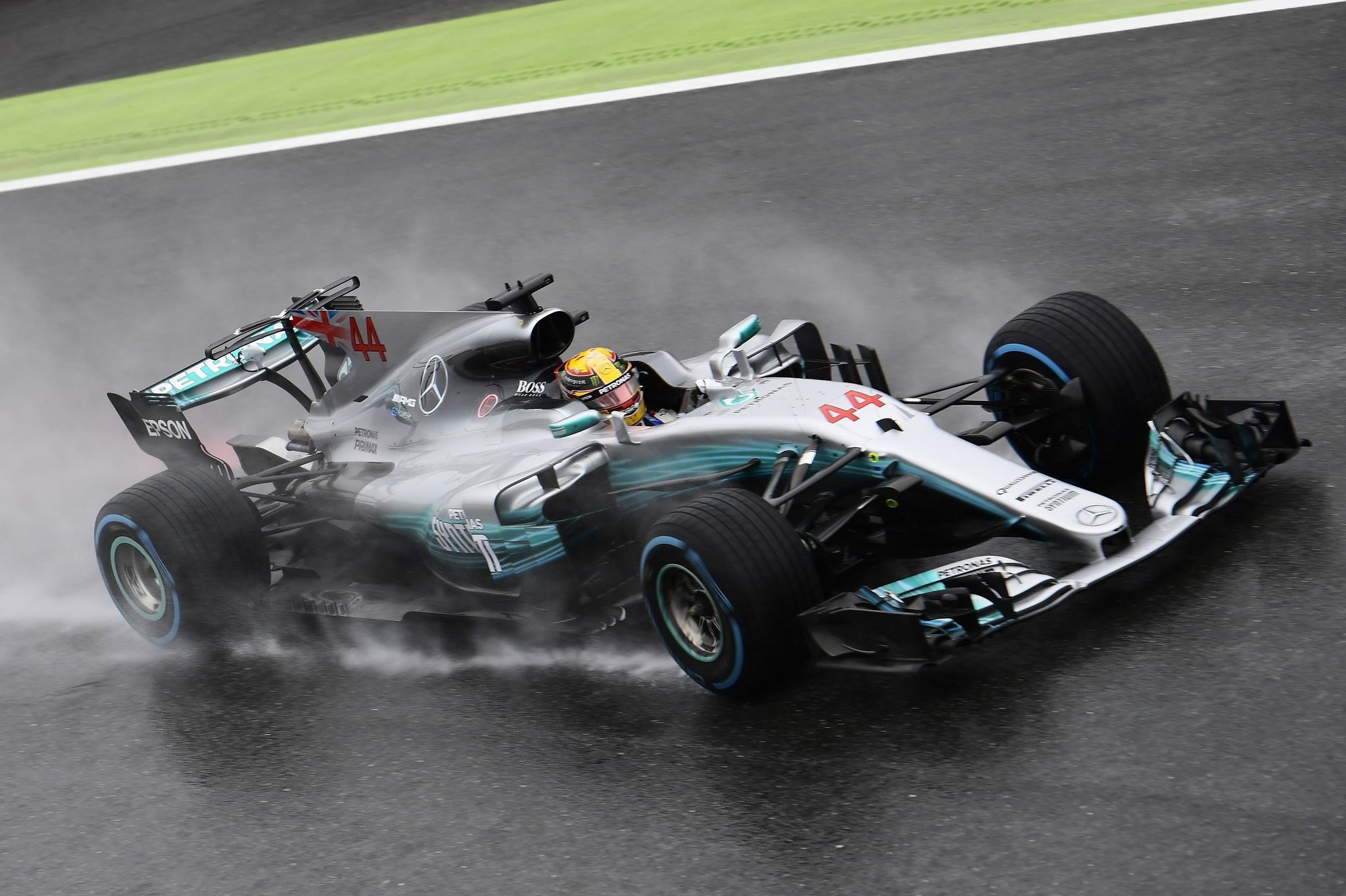 Mercedes' British driver Lewis Hamilton drives during the qualifying session at the Autodromo Nazionale circuit in Monza on September 2, 2017 ahead of the Italian Formula 1 GP. (AFP Photo)
by Associated Press Sep 02, 2017 12:00 am

Maintaining his focus after a 2 1/2-hour rain delay at the Italian Grand Prix, Hamilton finished more than a second ahead of Max Verstappen of Red Bull in difficult, wet conditions.

Daniel Ricciardo in the other Red Bull qualified third, although both Red Bulls are taking grid penalties for engine changes.

Verstappen had taken the top spot just before Hamilton's final lap, so when Hamilton reclaimed the leading position he rapidly pumped his fist multiple times before slowing down and waving to the crowd.

"These guys definitely made me work for it," Hamilton said. "The weather was obviously incredibly tricky for us all.

With the Red Bull penalties, Canadian rookie Stroll is due to start second on Sunday alongside Hamilton, while Ocon will be third on the grid and Bottas fourth.

Hamilton set the record in Monza of all circuits, where Schumacher remains beloved by the legions of Ferrari fans who attend this race each year.

Schumacher won five of his record seven world championships with Ferrari from 2000-04 and the automaker is celebrating its 70th anniversary this weekend.

"Growing up watching the sport as we all have and witnessing greatness in other individuals like Michael ... to actually be there proves dreams are something that can come true," Hamilton said.

Fresh off his win in Belgium last weekend, Hamilton is looking to erase his seven-point deficit behind championship leader Vettel.

Hamilton established the pole record in just 201 races, far fewer than Schumacher's 308. Still, the Briton has a long way to go to match Schumacher's record of 91 race wins, although he stands second with 58.

The late Ayrton Senna is third on the all-time poles list with 65.

It's also the fourth straight year that Hamilton will start first in Monza and it was his sixth pole overall on the track, breaking another record held by Senna and Juan Manuel Fangio.

Qualifying started on time but then was suspended after Romain Grosjean aquaplaned 6 1/2 minutes into the session.

Grosjean hit the barriers then drifted across the main straightaway without harm, just seconds after the Frenchman told his Haas team via radio: "I can't see where I'm going. It's too dangerous."

"I just think the conditions weren't good enough for us to go out there and I complained on the outlap," Grosjean said. "We shouldn't have gone out at all."

Meanwhile, Kevin Magnussen in the other Haas complained that water was leaking through his helmet.

During the delay, Hamilton and Bottas played a video game, while Verstappen and Ricciardo took over a live TV camera from the official broadcaster.

With the camera on his shoulder, Ricciardo walked into the Mercedes garage and zoomed in on Hamilton's car before being escorted away.

Meanwhile, workers attempted to sweep water off the track with brooms, blow dryers and heavy machinery.

After the resumption, Raikkonen ran into trouble when his brake caught fire in his pit box. He was released and nearly collided with a Force India coming into the next bay.

"That was a mistake," Raikkonen was told over team radio by Ferrari.

Fernando Alonso was among those eliminated in Q2 but he's taking a grid penalty, too, for a change on his McLaren Honda.